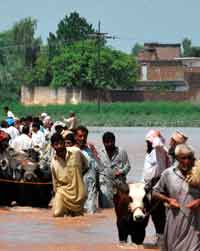 Floods in Pakistan have caused more than £3.2bn worth of damage to the country’s agriculture industry, according to officials.

More than 1.64m ha (4.05m acres) of farmland has been destroyed by widespread flooding in the country, which has so far killed more than 1600 people and left 20m homeless.

Officials claim crop damage could worsen as the flood wave continues, while more than 158,000 cattle have been killed in the disaster.

Farming experts said Pakistan would have to import 2m bales of cotton to replenish damaged cotton crops, while the floods had damaged $60m-worth (£38.9m) of sugar.

According to the country’s federal food minister, refined sugar output would fall by 500,000 tonnes.

Data from the Ministry of Food, Agriculture and Livestock also says the country lost a rice crop worth £160m and a maize crop of £168m.

More than £335m-worth of fruit and vegetables was also destroyed by the flood waters.

In addition to £129m-worth of wheat being destroyed, the country’s wheat seed stock had been washed away, leaving farmers without seed to sow next season.

The livestock sector had also been hit hard, with millions of pounds needed to treat ill livestock and provide emergency feed supplies.

Officials said almost one quarter of the poultry industry had also been wiped out.

Before the floods around 25,000 poultry farms supplied three million birds a day but at least 25% of those had been forced out of production or destroyed by the floods.

The farm ministry said the degree of devastation had put the country’s farming industry and food security in peril and left farmers in “a desperate condition”.

Officials said they were also concerned over potential disputes between farmers as the flood had washed away markings for land division.

• To help Pakistan’s farming community and those affected by the flood, contact the Disasters Emergency Committee to make a donation.