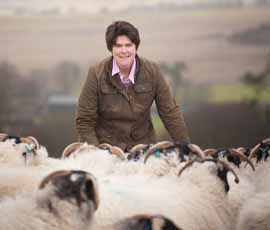 The tups are now out and appear to be carrying out their duties enthusiastically, probably encouraged by the mild weather.

Even the Leicesters are joining in and seem to have postponed their annual mission to end it all until things turn colder.

The cows are still outside so we are saving on bedding and fodder. It’s all quite a contrast with last November when, by this point, we had already had our final bin collection of the year due to the snow.

In these circumstances, it seems strange to have to start thinking about the festive season, but I’m afraid that time has come. I can announce that we have been successful in our bid to host the 2011 Christmas Lunch for my sisters and their families. We achieved this without the presence of Seb Coe or a video message from the Prime Minister. The clinching parts of the bid were: a) we were available; and b) it was our turn.

We aim to deliver the event on time and within the Olympics budget of £9.3bn. It is important that the legacy is more than a big pile of rubbish and a slight hangover. A major clean-up operation is already underway in preparation and we hope that some of that tidiness can be retained once the guests have gone home.

Already people are speculating about the opening ceremony. I think it will kick off with Bramble’s famous “wall of death round the living room” display, followed by a few words from Jake. “Get down”, perhaps. As to the lunch, plans are well in hand, with the turkey on order from our usual supplier, Fraser. Apparently he teased one of my sisters by saying that we hadn’t ordered a very big one. Cheeky.

I have also managed to secure a supply of gravy salt. This may sound like a small thing but it isn’t. I know top chefs don’t use it. I know Delia doesn’t use it. However, gravy salt is essential to our family’s gravy-making tradition. It adds colour and flavour without any horrible chemical aftertaste. But it is becoming very hard to get hold of as people yield to the temptation of instant granules. This scarcity recently resulted in a lunch at which I had to improvise with stock and Worcester sauce. Everyone present agreed it wasn’t quite the same. Search parties were sent out and consequently, one way and another, I now have a stash of five packets. This should tide us over for the foreseeable future or until the end of time, whichever comes first.

Last Christmas we were here on our own because of the snow. Our dining room is normally on the cool side but last year the radiator had packed up completely, so it was more like the Arctic. There was even an icicle on the inside of the window, which was so thick that I couldn’t remove it. Being hardy types, we still enjoyed our lunch, despite having to eat it wearing hats and scarves. I particularly remember Archie attempting to blow smoke rings with his breath. This was followed by a lively discussion on whether we believed in global warming. Clearly, we will have to ensure that the temperature is higher this year or our guests will never allow us to forget it.

Away from the farm, we have been to two cultural events this month, trebling the cumulative total for the year.

First we went to see Ruddigore performed by Opera North, then we went to the Turner Prize exhibition at the Baltic in Gateshead, encountering four fellow farmers in the process. None of these were hill farmers, it has to be admitted. The Baltic is one of those art galleries where the building is often very much more impressive than its contents. This occasion was no exception. As far as the competition went, we liked the one with the crumpled paper and the crushed bath bombs, but my well-informed friend tells me that the entry we liked least is likely to win. Apparently the organisers of the Turner prize are very excited because 25,000 people attended the exhibition in the first weekend in Gateshead, which is well in advance of previous attendance records in London. This either indicates that the North East loves modern art or that there isn’t very much else to do.

Elsewhere, my attention has been drawn to many recent alarming reports of approaching Euro-armageddon. I have done a few calculations on the back of an envelope and concluded that this will not be an altogether good thing. In addition, the decision of both our children to drop German with a view to taking up Spanish is beginning to look a little foolish, in terms of useful European languages of the future. It’s my fault. I said that we would visit either Spain or Germany depending on what they were studying. I think they imagined a bus tour of the industrial Ruhr and decided they would prefer Ibiza. On the bright side, I think we’ll have a good Christmas. I’m about to put the sprouts on to boil now.

Read more from Elizabeth Elder on our dedicated page