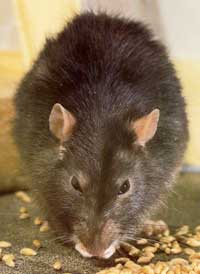 Proposals to ban certain rat poisons in Europe have been branded crazy by MEP Struan Stevenson.

Mr Stevenson warned of an explosion in vermin populations if a ban on anticoagulant biocides is passed by the EU parliament’s environment committee on 22 June.

The move would see 95% of rat poisons taken off the market, he said.

Pest controllers, farmers and others are up in arms about the proposal which would remove the most effective means of controlling rodent populations, Mr Stevenson added.

“This crazy plan stems from a complete over-reaction to the minimal danger posed by these poisons to human beings.

“Unless MEPs vote to exempt these poisons from the proposed ban, our best weapons in the fight against vermin will be lost – leaving farmers, the industry and householders vulnerable.

“Rats and mice pose a serious health hazard to human beings through contamination of food and the many diseases they carry. About 7% of all house fires and up to 50% of farm fires in the UK are caused by rodents gnawing on electric cables.

“I call on MEPs to act proportionately and not risk a dangerous explosion in rats and mice,” he said.