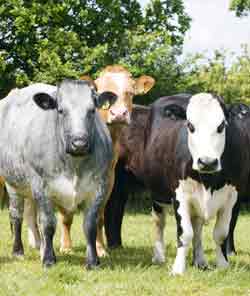 A police officer who was trampled by a herd of cattle has received more than £10,000 after being left unable to work for five months.

Inspector Chris Poole was walking his dog on the Sussex Downs when the cows punctured his lung, broke four ribs and severed an artery.

The landowner, who did not admit liability, paid Insp Poole in excess of £10,000 when he began legal action, claiming not enough was done to protect the public footpath users from the animals.

“I really want to put out the message that cows can’t be trusted,” he said following the accident in October 2007.

“I’m not one to believe in unnecessary over-regulation, but I think a lot of people don’t realise how dangerous cows can be.

“If farmers and landowners put signs up it could make people aware of the dangers.”

Common law says if animals behave aggressively or in an unusual manor, famers have a legal responsibility to erect warning signs or fences to protect lawful walkers on their land.