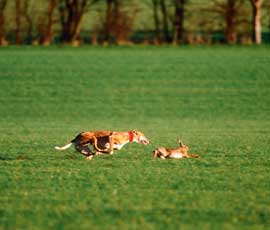 Vehicles will be seized and crushed this autumn as police step up the fight against hare coursing on farmland in eastern England.

Four police forces have teamed up to launch Operation Galileo – a seven-month campaign against hare coursing, due to run until next March. Offenders caught in Suffolk, Norfolk, Cambridgeshire or Lincolnshire face having their vehicles seized and crushed.

Reports of hare coursing have increased in recent years. Offenders travel to the region from across the country during the post-harvest period to hunt hares with dogs. More than 300 incidents were reported in Suffolk alone during the seven months to March 2013.

Police will carry out patrols in areas identified as potential targets for offenders. They have pledged strong action against anyone found to be hare coursing. Police will seek to prosecute those responsible, confiscating and crushing any vehicles used.

Assistant chief constable Tim Newcomb said: “Being a county with large rural areas, we are often targeted by hare coursers who trespass on private land to carry out this illegal activity. It can cause distress, alarm and inconvenience to our rural communities.”

Mr Newcomb said he was are committed to working with the public and landowners in particular, to stop those responsible. It was extremely important that communities worked together to tackle the crime, he added.

“I would ask anyone who sees hare coursing being carried out to report it to police immediately. We want these people to know that these offences will not be tolerated, we will use our full powers to bring those responsible to justice and will seize and destroy any vehicles involved.”

One local farmer, who asked to remain anonymous, said: “The farming community is fully supportive of this campaign, which will help protect our rural areas from the damage and financial cost that hare coursing can cause.

Hare coursing was a criminal activity rather than a sport, the farmer said. “We hope that it will send a message to hare coursers that it will not be accepted in our county and that our police force is taking strong action.”

Anyone witnessing hare coursing taking place is advised not to approach the participants but to phone police immediately on 101 – or 999 in an emergency.

Report or monitor crimes in your area