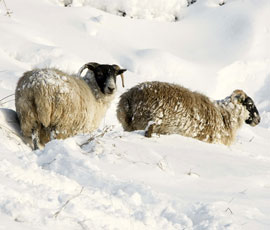 The general public is overwhelmingly supportive of farmers, but is unaware of the “silent crisis” facing agriculture, a survey has revealed.

The survey was carried out by pollster YouGov for Prince Charles’ charity, the Prince’s Countryside Fund.

It showed less than one-quarter (22%) of the British public would describe the farming industry as in dire straits and facing the worst crisis since foot-and-mouth disease. Only 5% correctly estimated that more than 100,000 animals died as a result of the snow and other poor weather this year between January and April.

Prince’s Countryside Fund trustee Lord Curry of Kirkharle said: “Summer might be in full flourish, but we need to remind people that farmers will be counting the costs of a brutal start to the year for some years to come.

“We’re facing a silent crisis in the countryside. One in four farming households are living in poverty and livestock farmers are struggling with reduced herds that will have a knock-on effect for several seasons,” said Lord Curry.

“Arable farmers are looking at a 30% reduction in crop yields. Farmers are seeing increased levels of indebtedness and the number of farmers quitting the profession is on the rise,” he said.

The YouGov poll also showed the majority of the British public (59%) thought a UK hill farmer earned more than double the average annual wage. The reality is that the average annual salary for a hill farmer is £12,600, with some earning much less, just £8,000 a year – considerably less than the UK minimum wage based on a full-time salary.

However, a spokesman for the trust said there were positive signs in the results. “Almost 90% of the British public thought it was important to maintain and protect rural areas in Britain. And the majority of those currently living in London confirmed that they valued the farmers who worked tirelessly to maintain it,” the spokesman said. “More than 80% thought it was important to buy British produce when possible as a way of showing support for the British farming industry,” he added.

More on the crisis in farming