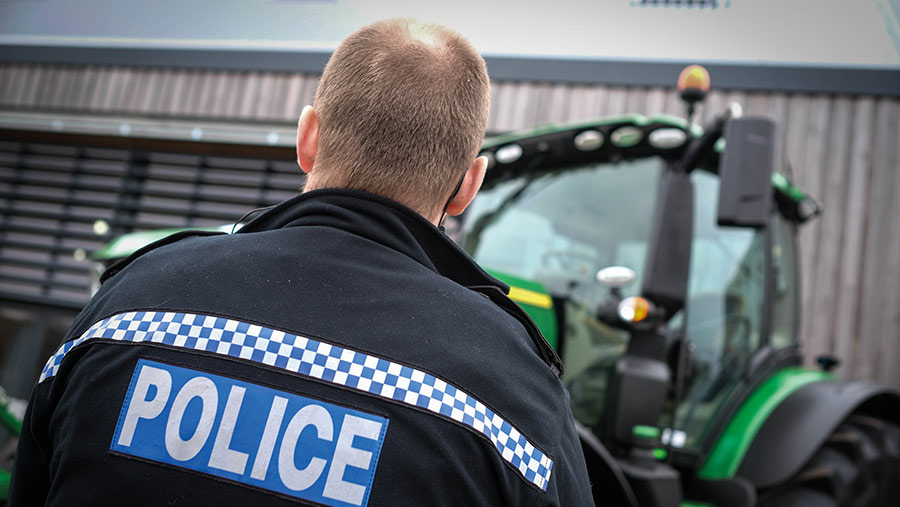 With rural crime never far from the headlines, PC Marc Jackson, of Wiltshire Police’s Rural Crime Team, tells us about crime that commonly affects farms and what farmers can do to protect their businesses.

What are the crime issues that cause farmers most problems?

These are consistently among the main issues in Wiltshire, according to the surveys we’ve done over the past five years through our Rural Crime Partnership forum.

What steps can farmers take to reduce their chances of being a victim of crime?

There are many crime prevention articles, videos and security checklists which can be viewed online.

Ideally, there should be multiple layers of farm security, which can be built up over time and include changes to routines and updated guidance for employees.

When we are on patrol, we quite often see simple steps overlooked or disregarded which could reduce the chances of being a victim. These include:

Fly-tipping seems to be on the rise – what can farmers do to protect themselves against this?

If you have a “grot spot” being established, it is worth considering signage to deter, or use CCTV/wildlife cameras to capture evidence.

Also look at why that spot is chosen. Is there easy access from a roadside or is it hidden from view?

Look at how you can make it less appealing to criminals, such as cutting back overgrown hedges and trees to make the area more visible or putting in gates or bollards to make access harder.

Sometimes just a small investment in crime prevention can make a difference.

If a landowner is having issues with specific locations, it is worth speaking with the local council’s environment officers, who may be able to assist and investigate.

Have the issues you’re dealing with changed since the Covid pandemic began?

We did notice an increase in livestock worrying across the county, which was due to the lockdown and daily exercise permission.

Often people – who may not have done so prior to the pandemic – began to explore the countryside around them, and often with newly purchased puppies.

This brought the public and livestock owners into conflict. Often the public would not stick to public rights of way or did not fully understand the impact dogs can have on livestock.

Another trend we saw was an increase in thefts of quad bikes and other forms of farm machinery, such as GPS systems from tractors.

This was likely due to other avenues of cashflow being harder to come by for organised crime groups, so they turned to perceived easier targets such as farms.

How can farmers get to know their local police team?

Most forces have some form of social media presence or have a community messaging system in place, which will pass out information or updates for their area.

The Wiltshire Rural Crime Team is on Twitter and Facebook, but we also send out updates and Farm Watch and Horse Watch newsletters via the community messaging system.

Local community policing teams will frequently attend community events or hold community engagement sessions, and this is a great way to meet the local officers.

What do you like most and least about working as part of a police rural crime team?

I enjoy working with the local rural communities and understand the fear and impact crime can have on these often remote and isolated people.

The team are all invested in combating rural crime and have chosen to pursue this area of policing, which is often underfunded and difficult to do.

We have often found the rural communities willing to assist us as much as they can and very welcoming of the team’s efforts.

One of the things I have disliked the most is knowing who has committed a crime, but a lack of evidence has restricted my ability to bring a prosecution.

Unlike in urban areas, the availability of witnesses, CCTV or forensic opportunities is reduced in more rural areas, making investigations much harder.

Farmers sometimes say the police don’t seem to care about their problems – is there any truth in that?

I don’t believe this to be the case. Every officer joined the police for a reason, and often it is a sense of wanting to serve their community.

Wiltshire is a rural county and the rural areas are very much a part of the community we serve.

Over the past few years, I have found a shift in officers’ attitudes about how important rural crime is and the impact it has on the community.

Unfortunately, cuts to officer numbers and funding over the past decade have made it even harder to police the more remote areas.

However, most forces are investing in rural crime teams to try and address this.