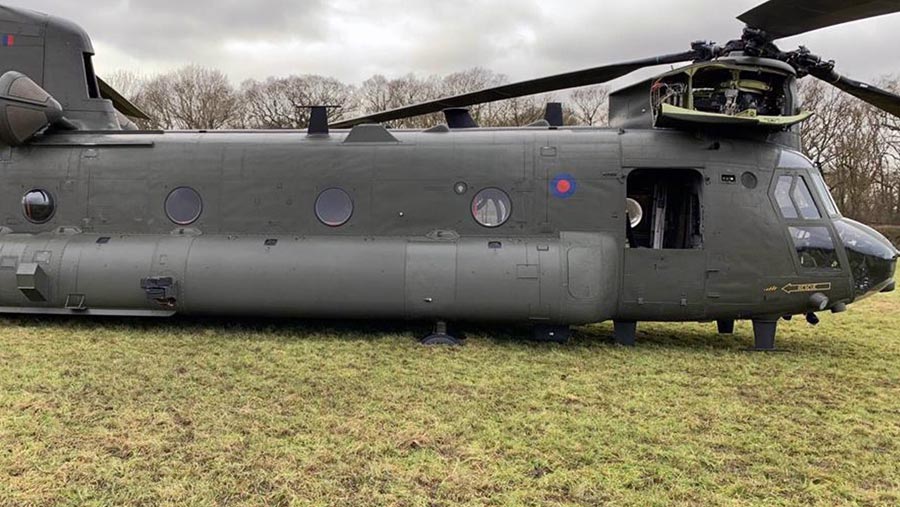 There are many things you’d occasionally expect to see stuck in the mud after a period heavy rain on the farm – a tractor, a welly boot, maybe even an animal.

It’s certainly not every day that you find an RAF helicopter bogged down on your land, but that’s exactly what one landowner came across last week.

The RAF Chinook from 28 Squadron based at RAF Benson in Oxfordshire got stuck after pilots were forced to make a precautionary landing in a field near Wantage, following a mechanical issue.

After touch down, the aircraft, which weighs almost 11t unladen, began to sink down to its belly.

In a statement on Facebook, the RAF said: “Our engineers deployed to the site to assess the mechanical issue and this has now been fixed.

“However, the extremely soft ground has made the recovery of the Chinook to RAF Benson very difficult. A team of specialists is working hard to safely extract the aircraft from the mud.

“While it was hoped that it could simply be dug out and then flown home, the risk of damage to the aircraft from this course of action has been assessed as significant and alternative options are being explored, including potentially lifting it from the mud with a crane.”

On Tuesday, a Chinook from 28 Squadron based at RAF Benson made a precautionary landing in a field near Wantage…