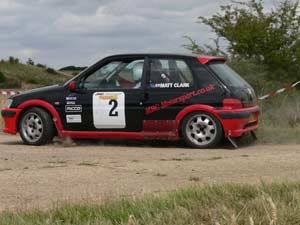 Hurtling down gravel tracks at 100mph is a far cry from the more sedate pace of life on the farm, but links between rallying and farming are stronger than you might think, as Paul Spackman reports

Anyone who was brought up on a farm knows that you’re never far away from someone tinkering with a bit of machinery or “fettling” something. They are skills that become second nature to many farmers and some, like Sam Fordham, have applied them to the world of rallying.

He’s in good company too. Many big names from the pinnacle of the sport – the World Rally Championship – have strong farming connections. Petter Solberg, Marcus Grönholm and Tommi Makinen are three top drivers who have swapped tractor cab for racing seat during their careers and there are many more throughout the sport.

Sam, 24, grew up on the family’s 300-acre arable farm at Radwinter in Essex. He has always worked with and fixed farm machinery, which provided a good basis for the challenges of running a rally car. “I worked on the family farm until I left school, and then worked on an uncle’s farm, so I have always been fixing up farm machinery,” he says.

But it was when he met Brett Griffin in 2005 that the rallying bug really took hold. “My uncle started a rally school as part of a farm diversification and Brett came along for a day course. We started talking about cars and rallying and decided to give it ago. Brett’s got a real passion for rallying and has always been tinkering with cars, so that’s helped.”

That year the pair launched Griffin Motorsport, with Brett behind the wheel and Sam heading up the service team. They bought their first rally car – a Vauxhall Astra GTE – for the princely sum of £1500. “It was cheap, but very tired and needed a lot of work,” Sam recalls.

A series of suspension problems dogged their first event at the Essex Charity Stages 2005, but the pair were keen to stick with it. Sam dropped his spanners and jumped into the co-driver’s seat and the pair’s first event in the car together was the Longcross test track in Surrey. They finished with just a few minor problems, but knew that success would be limited because of the car’s lack of power compared with others in their class.

They returned to Longcross and achieved second in class. Since then, the team has gone from strength to strength, winning the Association of Eastern Motor Clubs championship in 2007 and finishing second in the championship last year. This season they’re competing in – and leading – the highly contested British Rally Championship Challenge. Victory and this will see them qualify for free entry into the 2010 British Rally Championship, where they could be competing against some of the big names in British rallying.

Sam and Brett have had to juggle these achievements with their normal day jobs – Sam is a trials technician with KWS plant breeders near Cambridge, and Brett is a tree surgeon. “Rallying fits around work well and KWS has been very lenient with giving me time off for events,” says Sam.

“There is a bit of a problem with summer events that clash with harvest, but rallying’s good as it takes a break in summer, which I suppose goes back to its old links with farming.”

Sam has also managed to convince KWS to sponsor the team – money that is essential to help cover the event costs, such as tyres (gravel tyres cost £80-100 each and last about 60 stage miles), fuel, travel, accommodation and entry fees. “We’re doing eight events this year and each one costs about £2000. There are five of us in the team, including the service guys, so it soon adds up. If we make the step up to the British Rally Championship, we’ll have to spend a lot more – probably at least £5000 per event.”

While Sam and Brett would love to progress in rallying and compete in a full WRC-spec car, Sam remains loyal to the industry he’s grown up in. “I’d like to return to the home farm, but until then I’d like to learn more about the industry,” he says. “I think anyone going into farming should work for an agronomist, breeder or manufacturer to see how much time and effort goes into things that we often take for granted.”

Farmers Weekly met Sam and Brett at a KWS rally experience day on a farm in Bedfordshire, hosted by seed wheat growers R A Gibson (Colesden).