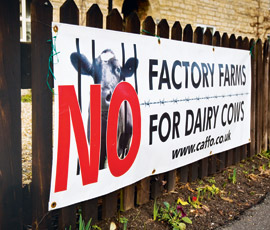 With 2011 coming to an end Farmers Weekly looks back at some of the events that grabbed the headlines this year.

Plummeting pig prices forced producers to take to the streets in March. The protesters descended on Westminster taking with them a giant sausage which was signed by supportive politicians, celebrities and passers-by.

Local council officials finally evicted illegally-camped travellers from the site in Essex. The 10-year legal battle to remove the travellers ended in October with police in riot gear storming the encampment.

The owner of a prize-winning bull, which had been condemned to slaughter for TB, challenged DEFRA’s decision. After 12 months of legal wrangling with DEFRA’s lawyers, Yorkshire farmer Ken Jackson won the right for a re-test. The test proved negative and the bull, Hallmark Boxster, lives on.

A tractor driver escaped injury after his tractor was sliced in two by a train in Norfolk. The front end of the John Deere was sheered off and dragged 200 yards up the line by the King’s Lynn to King’s Cross train. The cab remained intact and the driver walked away.

Pop star Rihanna’s scantily-clad antics for a video shoot in a field, earned her a ticking-off from the farm owner. The farmer in Northern Ireland was upset as the singer began to strip off.