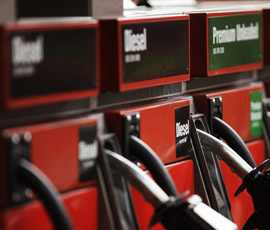 The price of diesel at rural filling stations is more than 4p per litre higher than in urban areas, new research shows.

Cars are becoming an “unaffordable necessity” for many people living in the countryside, who have to travel longer distances between home, work and essential services, said the Countryside Alliance, which conducted the survey.

The most expensive diesel in rural areas was in Purbeck, Dorset and Ryedale, North Yorkshire, averaging 146.9p per litre.

However, city dwellers in North Tyneside, Birmingham and Dartford are benefiting from a pump price of 139.7p – 7.2p less per litre.

Barney White-Spunner, executive chairman of the Countryside Alliance, said: “Not only do people living in rural areas have to drive further to go to work, further to access essential services like schools, doctors and the supermarket; but they have to pay a lot more for their diesel to do so.

“The cost of fuel is a major concern for everyone who lives in the countryside, and cars are fast becoming an unaffordable necessity for many rural families.

“We urge the Chancellor to help the rural economy get back on its feet and to cut fuel duty in his forthcoming budget.”

A report by the Centre for Economics and Business Research (CEBR) has found that cutting fuel duty would create thousands of new jobs and could be done at no loss to the Treasury.

The AA has urged the Chancellor to cut fuel duty in his forthcoming Budget after findings that UK drivers already pay the highest fuel tax in Europe.

A Treasury spokesman said: “At the Autumn Statement, the government took more action to help households with motoring costs by freezing fuel duty until August and scrapping a second planned rise altogether.

“This came after our decision to cut fuel duty at Budget 2011, abolish the fuel duty escalator and replace it with a fair fuel stabiliser. This support is worth more than £4bn over two years.

“Petrol and diesel will be an average of 10p per litre cheaper than if we had proceeded with the escalator introduced in 2009. In addition, from this week, motorists in remote islands will benefit from a 5p-a-litre cut in pump prices thanks to the government’s pilot rural fuel rebate scheme.

“The government has also announced a £165m package of initiatives to unlock the economic potential of rural areas.”