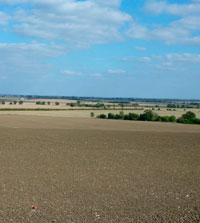 Avenue Farm at Fenton, near Warboys, is on the edge of the Cambridgeshire Fens and is being sold by St John’s College, Cambridge, at the end of an Agricultural Holdings Act tenancy.

There are 419 acres of Grade 2 and 3 arable land and a vacant, three-bedroom cottage in need of restoration, which is available as a separate lot. Cannamore and Evesham 3 soils have supported cereals and oilseed cropping and there is an 850t grain store with on-floor drying. Avenue Farm is being offered in five lots with a guide for the whole of £2.57m.

“Although it’s often said by agents, this will be a real test of the market,” said Mr Wilson. “There haven’t been many such farms on the market in this area and it’s exactly what many buyers are looking for.”

Across the border in Suffolk, Hawkes Farm near Bury St Edmunds has 152 acres, a large modern farmhouse – “Menagerie Manor” – plus a cottage.