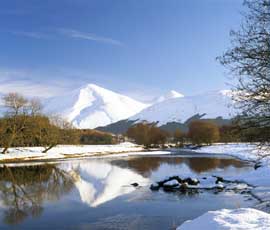 A programme to boost hill and upland farming research in Scotland may have come too late to stem the tide of land abandonment, industry officials fear.

The SAC has announced a bid to revive two research stations at Kirkton and Auchtertyre farms, which cover 2,200ha near Crianlarich on some of Scotland’s highest and wettest land.

A new industry advisory group, convened jointly by SAC and NFU Scotland, has identified almost £100,000 of funding for the programme.

Representatives from Quality Meat Scotland and the Loch Lomond and Trossachs National Park are also part of the group.

The SAC plan involves rebuilding the full sheep stock, introducing a small hill cow herd and using these to study and identify the economic possibilities of hill farming.

But the plan comes ahead of an economic analysis, to be published shortly by SAC, which will show a continuing decline of livestock numbers in Scotland’s hills.

The news will be published in a revision of the damning Retreat from the Hills document, which was published three years ago and demonstrated the extent of land abandonment in parts of Scotland.

The updated document will show that breeding sheep numbers during 2010 were at their lowest for over a century, despite the best market prices for sheep in a generation.

Speaking at the launch of the SAC research initiative, industry leaders raised doubts over whether the new research effort would be able to reverse the decline.

Scottish Beef Cattle Association chairman, John Cameron, said: “The hill farming industry doesn’t rate Kirkton and what they’re doing very highly. These units need to be telling the industry what to do, but where is their advice? They need to claw back a lot of ground.”

Although NFU Scotland president Nigel Miller has pledged to help find money to fund the SAC plan, he conceded that the revival of Kirkton and Auchtertyre had been left late.

But he said there were no other research establishments like them left in the UK and something had to be done.

He hoped the farms would become a “centre of excellence that could spin off to meet the needs of the next generation”.

Dalmally hill farmer Sybil Macpherson, who will chair the new advisory group, added that the initiative could also help develop the people and skills required by modern hill farming. She said it should also be a priority to address a disease known as Plochteach, or Yellowses, which can kill up to 30% of a West Coast lamb crop.