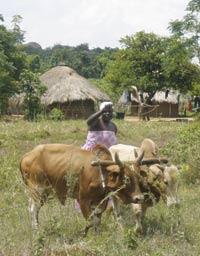 As the charity Send a Cow marks its 21st birthday, trustee Gerald Osborne visits Uganda to see the remarkable results of its work

It was unlike any farm walk I had been on in Britain. I was in Uganda and after a two-hour drive from Mbale along dusty roads, we were nearing our destination.

The first thing we could hear was singing. Then we saw a dozen ladies in long, bright pink dresses coming to meet us, dancing up the track.

As we reached Hope Green Farm, the singing and dancing continued and getting out of the car we were swept up and carried to our seats. There was a sense of joy, not because of our presence, but because of the charity Send a Cow, which had, in five years, transformed the lives of the members of the Aliasit Women’s group.

When I saw the advertisement in Farmers Weekly for a trustee of Send a Cow, like so many farmers I have talked to since then, I was pretty hazy about what it actually did. Yet it is a charity started and developed by British farmers.

It began 21 years ago when a group of Christian farmers anguished about slaughtering healthy cows because of quotas. Through links with the Ugandan church, and after initial research, 25 cows were flown to Uganda on 4 July 1988. As farmers, we can take great pride in the work it has done since then, transforming the lives of some of the poorest African farmers. 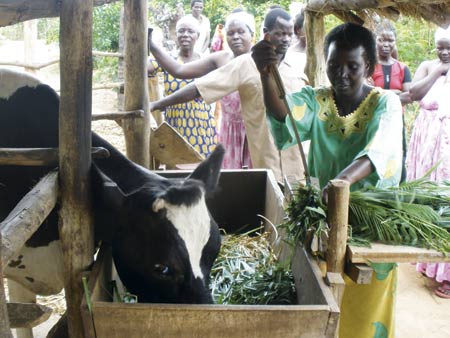 As Helen Kongai showed me around Hope Green Farm, I saw how this transformation could happen. She has five acres or so from which a few years ago she would struggle to produce one meal a day. Now, even though it is the dry season, the whole place is lush and shady. Everywhere there are trees and fodder, fruit and vegetables. There are bag gardens, keyhole gardens and other water conserving techniques and soon we come to a thatched shelter and loafing yard where we find Charity, Helen’s cow, milking well at 15 litres a day.

One quickly realises that the work of Send a Cow is far wider than just the giving of livestock. At the heart of the organisation is training. Helen’s farm is itself now a training farm where other farmers can come and learn all the techniques.

Send a Cow has also developed an extensive peer network of farmers helping farmers and supported by extension workers. Like everywhere, farmers cannot keep a good idea to themselves.

Training starts long before the livestock arrive. Send a Cow always works with groups of farmers, which are mostly women. After a group has applied to Send a Cow, an extension worker will visit them several times for initial training.

There are three main facets to this. First is the care of the livestock themselves, now all locally sourced. These include cattle, goats or chickens, depending on what is suitable. Second is the use of sustainable agriculture. Organic farming is key, not for any ideological reason, but because it works best in this environment. By using the cow dung and composted vegetable waste, yields have risen three or fourfold. Third is training in social development.

One of the most moving testimonies we heard was from one of the husbands describing the effect on the health of his children and the wellbeing of his marriage since they received their cow; the farm was a real partnership.

It is the group themselves who decide which of their members are in greatest need and will get the first cows. When the cow arrives, there is great rejoicing and she soon becomes part of the family. There is one more condition; the first female offspring has to be passed on to someone else. Not only does this give the recipient the dignity of being a donor herself, but also gives an inbuilt multiplier and, in due course, all the group members will have received a cow and the benefits go wider than the group itself as neighbouring farmers adopt the techniques taught by Send a Cow

As we travelled on around other farms I reflected on what I saw and heard. You could easily spot a Send a Cow farm: Verdant and thriving and with the trademark animal shelter.

Another common theme was the value put on education and, for most, this was the first time they had been able to afford to send their children to school.

I was also very struck by how innovative they were, like farmers anywhere. Invariably they seemed to buy more cows or diversify into goats and chickens, or introduce different fruit and vegetables. One farmer had won a contract to grow citrus and grafted mango for the government, another had built a school. Incomes had risen by up to tenfold and typically within a few years groups can become completely self-reliant.

In all, the testimonies we heard the most frequent word was hope. Send a Cow has given them hope for a future they could not imagine otherwise.

Working now in seven countries, the development model of Send a Cow is becoming internationally recognised. Yet, being devised by British farmers learning from their African colleagues, it is a very practical and cost-efficient method of allowing African farmers to lift themselves out of poverty through the use of their own resources.

It has been an amazing outcome from that plane load of cows 21 years ago.

* Gerald Osborne is a Wiltshire farmer and a non-stipendiary Church of England priest. For more info on the charity www.sendacow.org.uk