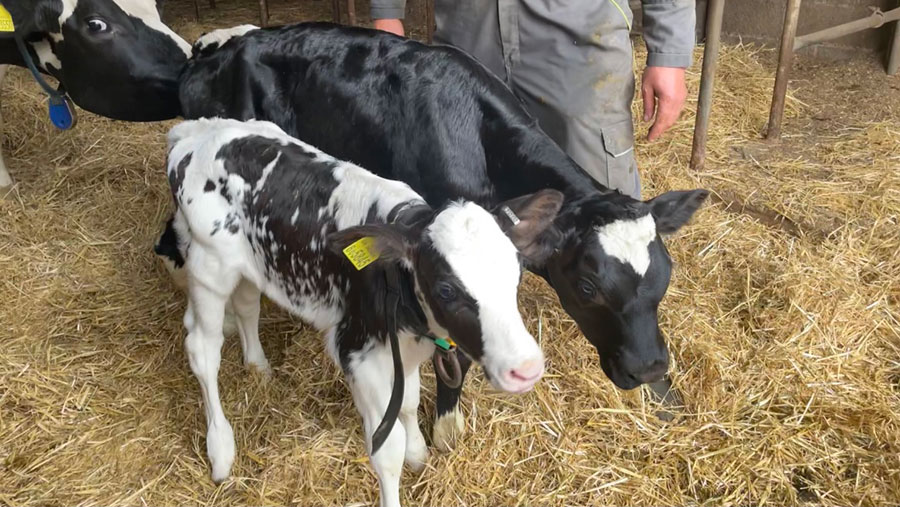 A watchful eye is being kept on a monster heifer calf born over the weekend on a Somerset dairy that tipped the scales at 105kg.

Both Holstein cow and purebred Holstein calf are doing “remarkably well” after a caesarean section was required on Saturday 26 June at Coombes Manor Farm, Bridgwater.

Tim Coombes, 23, who farms with his father, Darren, and the team were amazed at the size of the calf, which was only 10 days overdue.

Mr Coombes said she is more than double the weight of the average calf born on the farm.

“The vet arrived at 5pm to perform the operation and by 7pm the cow was stitched up,” he said.

“The calf has been slow to stand and walk, but has fed well and looks healthy.”

Three people are needed to help the calf stand up to get used to its legs at least twice a day.

“We don’t want calves to get that big, but our vet did really well,” said Mr Coombes. “He was also gobsmacked by the size, but we all think that it was just one of those things.

“I can only remember five or six caesareans happening here while I’ve been around. The bull we used – Alta Top Shot – has been great to calve otherwise, it’s a bit of a strange one. We’ve calved 30 or so to him fine, so we definitely aren’t blaming the bull.”

The cow is doing fine and will enter the 420-strong milking herd, which yields about 10,500 litres and produces milk for Muller and Sainsbury’s.

The huge heifer calf will be reared at home with the other replacement heifers.

Mr Coombes added: “The cow is acting like nothing happened. She is a big cow, but no different to the rest, really.”

Farmers Weekly is checking whether this is a record.

Darren Todd, geneticist for Holstein UK (HUK) at the National Bovine Data Centre, said calf weight data is not routinely collected by HUK, so it was difficult to say how rare a calf that size is.

He added: “105kg is certainly exceptional, and at least twice what an average Holstein calf would be at birth. It’s probably unlikely to be a genetic thing – it shows that livestock farming is always full of surprises.”