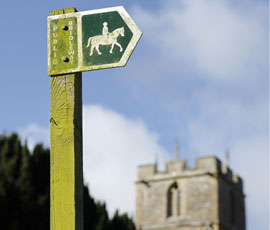 Landowners in Somerset face the recreation of hundreds of rights of way across their land following concerted action by a bridleway group.

The South Somerset Bridleways Association has so far applied to have almost 200 bridleways reinstated, which it claims have been mistakenly missed off the definitive map. But affected landowners have not been consulted, and say that some applications have been completely fabricated.

“When the definitive map was drafted some errors were made, and anybody can apply to change it up until 2026,” said Barry James from Somerset County Council. Even if routes had not been used for centuries, they could be reinstated if there was sufficient evidence to prove their existence. “The South Somerset Bridleways Association has been extremely active, accounting for more than 80% of applications.”

However, following erroneous advice by the council, the association had not made sufficient efforts to contact landowners before submitting their applications, so all cases were on hold until better evidence had been gathered, he said. “We are preparing guidance notes for landowners so they know what to do in the event of an application being made on their land.

“There is a maxim that once a highway, always a highway, but my personal view is that there should be a more commonsense approach. Each case costs £2,700-£7,000 to process, and if they are successful the council has to pay to reinstate the route; we’re talking several million pounds of taxpayers’ money.”

Farmer Dave Perrin was surprised to find signs for seven bridleway applications at Oath Farm, Langport, including one that passed under a 2m-high railway bridge. “We have a private track onto the farm – if it’s made into a bridleway we won’t be able to lock our gates, and would have no form of security. If we challenge it, we don’t get our costs back even if we win – it’s a one-sided farce from start to finish.”

But Sarah Bucks, a member of the bridleways association, said they had only followed the council’s advice, and wanted to work with farmers, not against them. “This is not about creating new routes, it’s about reinstating routes that were incorrectly recorded in the definitive map. We are not trying to make peoples’ lives difficult and are happy to meet them to discuss the evidence of historic routes – or create diversions where it would be easier.”

Landowners who found an application had been made over their land should contact Somerset County Council or the NFU for advice.