One Warwickshire farming family has tapped into the growing demand for “wild running” and created a unique diversification.

It all began when Charlie Moreton was 25 and suffered a neck injury playing rugby so had to give up the sport.

As an alternative he got more into running. At the same time, one of his cousins, Karen, who’d just completed a 10km mud-run, suggested he ought to organise something similar on the family farm.

“As a family, we’d always been sports-mad, so the suggestion made sense to explore,” says Charlie. 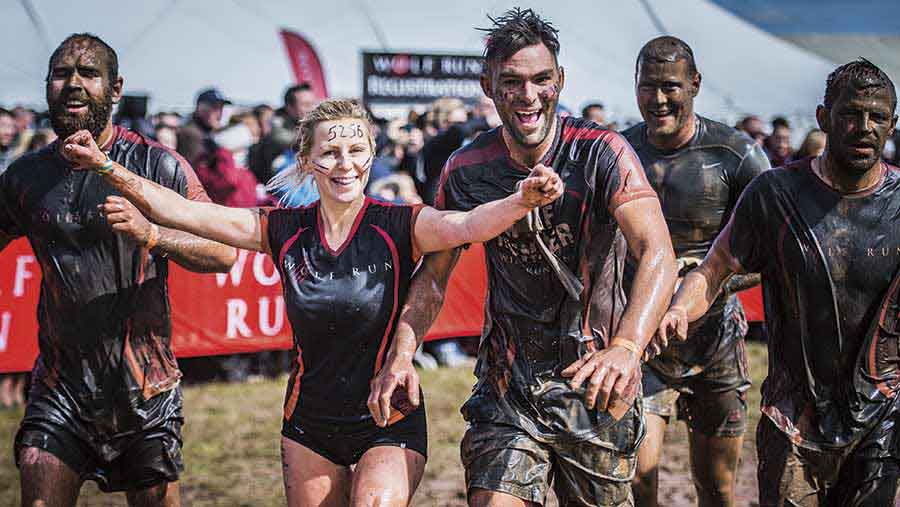 The timing was perfect. It was 2010 and, with wheat prices low, the future direction of the business was under review.

One option was making a big investment in the grain dryer and machinery; another was to contract out the arable work.

The family opted for the latter, opening the door to new opportunities.

“I’d been driving tractors since as long as I could reach the steering wheel and knew farming would always be the backbone of everything we did, but I wanted to do something else as well.

There was a need to diversify – both for the sake of the farm and for my own career.”

And so the concept of the Wolf Run, a “wild running” event, was born. It’s a 10km run across natural terrain, which features 24 natural and manmade obstacles – everything from lakes, mud-pits and fallen trees to cargo nets, bale-stacks and a 100m waterslide.

“Rather than just a picturesque run round parkland, I wanted to offer something more extreme,” says Charlie.

Hence they coined the name “Wolf” which, as well as its overtones of the natural world, is an acronym for “woods, obstacles, lakes, fields”. 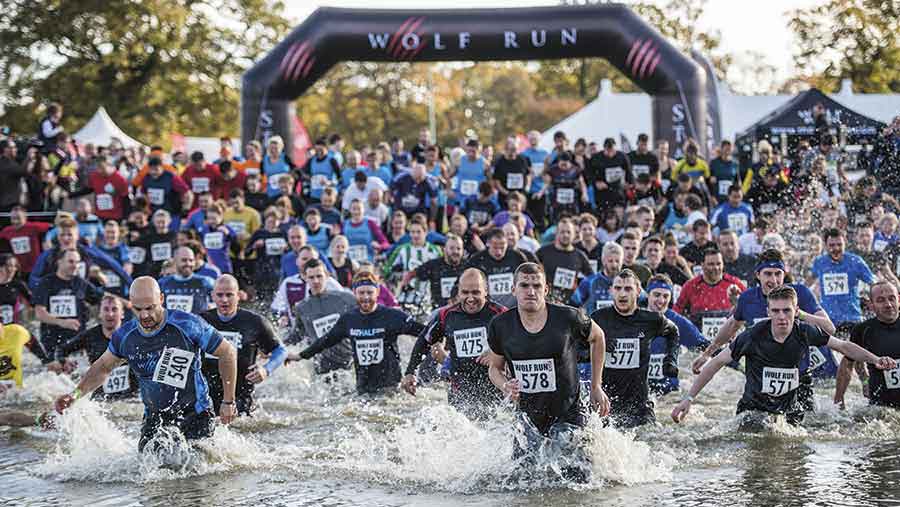 It’s hardcore, raw running, but the emphasis is on camaraderie rather than competition so it’s not billed as a race.

Instead, it’s designed to test mental and physical strength, skill and stamina, plus foster teamwork.

“I wanted to stay true to my family values and make it an inclusive event which attracted men and women of all fitness levels who could experience a huge sense of achievement from taking part and finishing.”

The first one attracted 650 runners in September 2011 and, as its popularity rose, Charlie began to run it at two locations, each over two days – one on the family’s 485ha near Leamington Spa, the other on rented land in Leicestershire.

Those taking part either “run in a pack, or as a lone wolf” as they walk, race, climb, jump, wade, crawl or swim their way round.

Charlie and his brother Will now host four Wolf Runs a year as a standalone business, with each drawing as many as 9,000 participants and a similar number of supporters.

The clientele has proved to be a more varied bunch than anyone expected.

“I thought most of our runners would be real enthusiasts and keen athletes – and some people are like this, they’re absolute machines who power round in an hour – but there is a massive pool of people who want to do it. The demand for this kind of wild running is expanding.

“Prior to launching it, we looked at other courses and decided to go a step above them. My brother and I are the type of people who, when we see an obstacle made from five bales, think: What could we do with 50 bales? 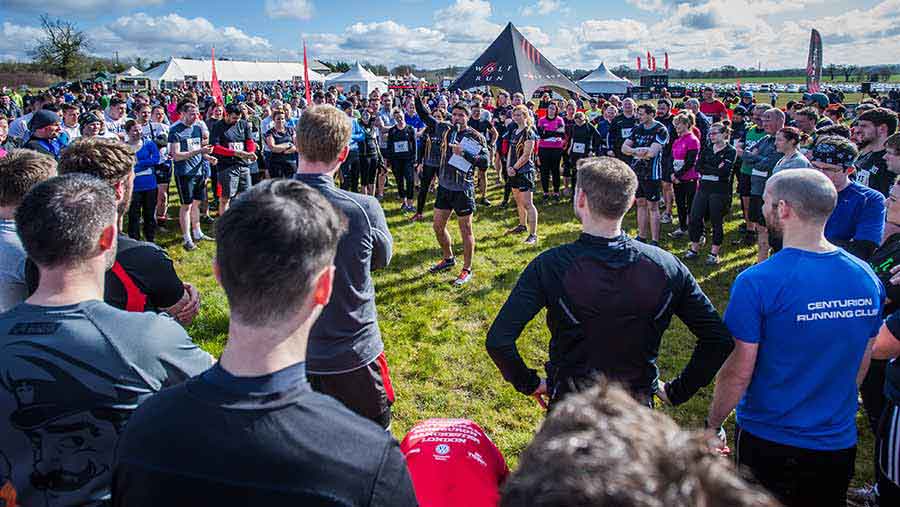 “However, while I wanted to make it challenging, it was important that it was achievable. I asked myself: If I was a customer, what would I want?

“Most running events are run on a small, tight budget. You turn up, register, run, get a medal and go home. I wanted to create a festival atmosphere. We’ve even got a DJ playing music.”

There’s a community feel to Wolf events, meaning people come back time and time again. There’s even an Alpha Award for anyone who completes all four in one year; 1,300 people will receive it in 2016.

The sense of being part of a club is also fostered by the T-shirts that participants get. These, Charlie reckons, represent his “best and luckiest decision”.

“At most events, you’d get a cheap T-shirt that would shrink in the wash and you’d only wear once. I had “technical” ones made and this was and is a big cost, but it’s what runners want and far better than any advertising.

“We’ve got nearly 20 designs now and people collect them. It’s a fantastic way of spreading awareness.”

Similarly, social media has been a key way the team has got the message out. “It was a lucky time to be launching this type of business. Everything is so visual and interactive and the community vibe on Facebook is perfect for what we’re trying to achieve.” 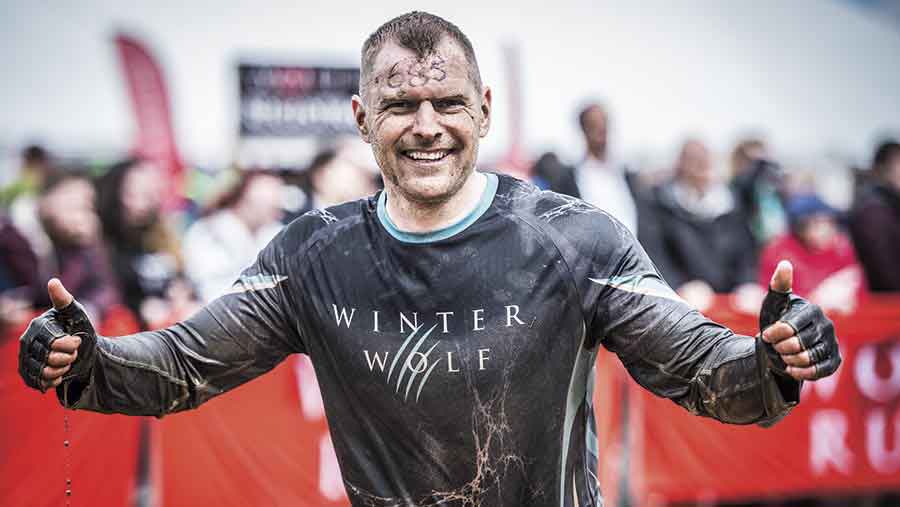 They also experienced a surge in interest when the Metro – a big free newspaper in London – ran a feature on them in 2011.  “Online hits went through the roof – in fact, it crashed the website.”

Now 33 years old, he admits to having been on a steep learning curve, especially as regards the marketing and advertising aspects of the business.

Where he did have prior experience, however, was the sporting aspects, as he’d run and swam on the farm from a young age with Will, as well as doing other obstacle course races and mud-runs.

He also had some event management experience, having organised banger races after harvest on winters stubbles. These get-togethers had drawn 200 to 250 friends and raised cash for The Air Ambulance and Macmillan Cancer Support.

At one such gathering, they’d even projected the Rugby World Cup semi-final live on to a big screen. “They helped give me the confidence that we had the know-how to host an event.”

The family also had history as regards alternative enterprises – with Charlie’s dad and three uncles all having done their own bit of diversification.

Closely monitoring costs has been a constant focus. “Luckily, this business didn’t need large amounts of money early on,” says Charlie. “We’ve taken the view that we’d spend money only as and when it came in.”

Family and friends have helped massively and, at the first event, they accounted for all the marshals.

“I used to be quite active with YFC and still have friends who have contact with them so they’ve provided a great pool of local helpers.”

The business now has five full-time staff, plus part-time help for build-up and take-down (there are 200-plus staff each day during events).

“Local farmers help me a lot in this respect. There aren’t many people who have the skill set – whether it’s building obstacles, or driving an ATV – to do this type of work, but farmers have obviously grown up with it.”

Insurance is inevitably a big cost. “I also focus a lot on my medical team. We don’t have high injury rates, but because of the nature of the course it’s not accessible by normal ambulances, so we have military doctors who are qualified to deal with a range of traumas.”

Charlie’s proud of the fact that hundreds of charities can benefit from each event; ditto the fact that the business brings people to the area, supporting local businesses and B&Bs. 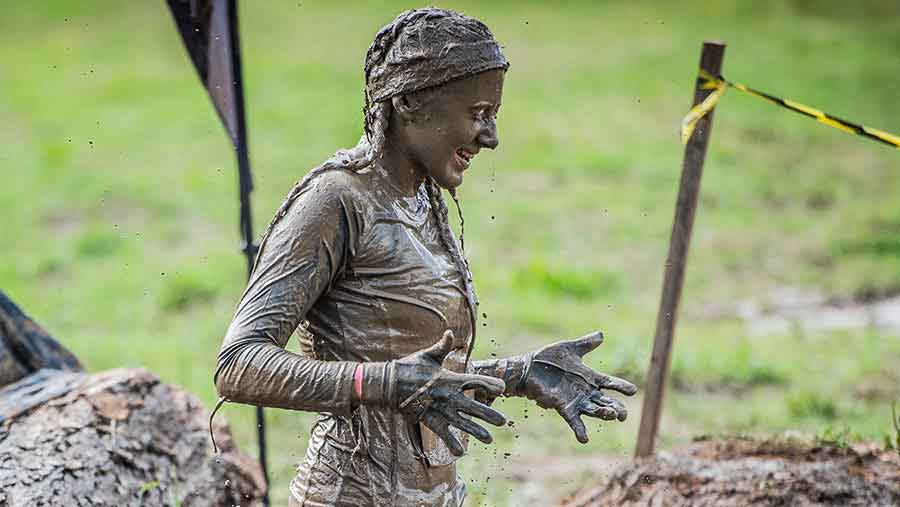 But he recognises the need to change, even though it’s won the accolade Best UK Obstacle Race at the prestigious Running Awards for the last two years.

“The early days were very exciting. It was nerve-racking and a lot of pressure. But if I don’t change what we do, it’ll go out of fashion. Each event has to be better than before.”

The newest offering is the Winter Wolf, which took place on 5-6 November, a “brutal” challenge which includes a river and lake crossing near the beginning. “This is just to get you nicely chilled at the start,” laughs Charlie.

“The prospect of looking for new locations and putting it on for new people is thrilling. That’s what driving me on.

“I’m a perfectionist. I care about things that runners might not necessarily even notice but they matter to me.

“It’s a real buzz when everything is running smoothly. Of course, there are days when you have your doubts and having an outdoors event in the UK with our weather is always going to be challenging.”

Do what you love

If you’re looking to launch a diversification, start by considering what you’re interested in personally. If you do something you love, it’ll come across in the end result.

It’s important to have a definite goal when you begin, but equally important is being flexible, willing to change and to move that goal as the business grows.

Don’t try to do everything yourself. Work out where the gaps in your skills set are – and get other people involved. I was a bit of a control freak in the early days, but I soon learnt you have to draw on other people’s skills.

Whether it’s intricate trails, awesome obstacles and slick registration, this is critical at all stages.

When you launch an enterprise, you won’t have any idea how big it can potentially get, so buy things slowly, as and when you need them.