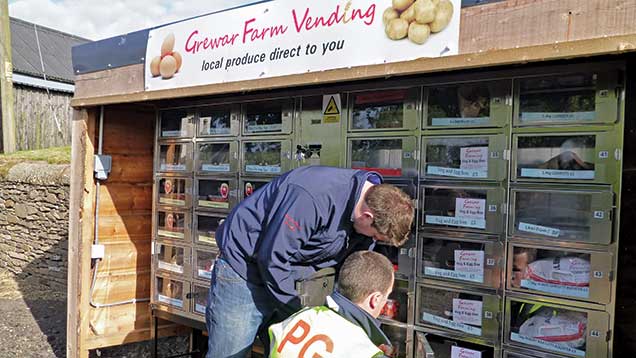 Everyone thought they were bonkers.

The doubters says the concept was bizarre and asked if the potatoes would be dispensed one at a time. They wondered if shoppers would need to bring their own bags to catch them as they rolled out of the dispenser? Then last December, when the equipment was wheeled in and stocked early one morning, it was the turn of the retail centre cleaners to smile and shake their heads.

But cousins Pete (37) and Euan (33) Grewar had the last laugh. Their idea has proven a success. And while they have plenty on their minds running their 530ha seed and ware potato business in Angus and Perthshire, as well as contract farming an additional 2,800ha across Scotland, it is clear this diversification has captured their imaginations.

An extension of the farmgate honesty box

Every time Pete gets an automatic alert on his phone telling him the lockers are half empty, he gets a kick from the direct connection between the farm and the public buying his produce.

And while the returns from the four vending machines are small beer in comparison with the long-established core business at East Ardler, near Blairgowrie, they are already turning over £1,000/week.

Another two machines are due to be installed within days. One will slot into a busy shopping centre in Perth and the other is likely to be located in a 24-hour petrol station.

The Grewars describe their novel business as an extension of the farmgate honesty box.

“Our farm isn’t on a road that merits a farm shop, yet we used to regularly turn people away when they turned up asking for a bag of potatoes. It was just too much hassle to fill the odd pack, so we came up with the idea of a vending machine.

We installed the first one on the home farm and when that took off, another two on other farms. We then thought it would be good to promote potatoes in the centre of the city and when we approached the Overgate Shopping Centre in Dundee they welcomed us with open arms,” says Pete.

“We started on a three-month trial and it has been a great success, so we will be there for at least another year.”

Produce suppliers for the vending machines are predominantly family and friends in Tayside and Fife and the focus is on seasonal vegetables and fruit.

Dos and don’ts of successful diversification

The Grewars obviously have a monopoly on the potatoes (except for very early Epicures from Ayrshire), cousins in Angus produce the strawberries, another cousin supplies raspberries, the eggs are from Fife and neighbours produce the carrots and onions. One of the biggest successes was local brussels sprouts in the run-up to Christmas.

“It was almost impossible to keep up with the demand in December,” says Euan. “We introduced the vending machine at the beginning of the month and almost immediately it went crazy. People loved the immediacy of fresh vegetables from the farm, and one of the most common comments we got was that they like dirty carrots. People can’t get enough of them.”

And yet it could so easily have all gone wrong. The men decided not to do any market research before embarking on the project.

“We installed one machine and waited a week, then ordered three more – and then wondered where we would put them. We just flew by the seats of our pants,” says Pete.

“We got cracking and then did a straw poll. We asked customers if they preferred washed or unwashed potatoes, that kind of thing. We discovered through trial and error that the more exotic vegetables are too specialist and don’t move fast enough. Everything is under review all the time.”

When the first vending machine was installed on the home farm, the men took every opportunity to speak to customers and gauge their opinions on the produce and the technology.

“We would run out of the office and engage everyone in conversation, but there is less time now that the potato crops are growing, and harvesting will leave even less scope. Winter is when we can devote time to vending.”

Meanwhile, for the farmers, the figures stack up. The Roesler machines are imported from Germany at a cost of £7,000-£15,000 each, depending on whether or not they are refrigerated. They take coins or banknotes and the produce ranges in price from 80p for a cauliflower to £5 for a veg and egg box.

The biggest overhead is paying two part-time employees to drive around and keep the compartments stocked. In the shopping centre that means being in before 9am or after 6pm. “They don’t want us arriving with a trolley of fresh produce when they are busy.”

So the model works. And having hit on a successful format, the Grewars are ambitious.

“We are considering gearing up,” says Pete. “Obviously it wouldn’t make sense to have one machine in Aberdeen, Edinburgh and Glasgow, but six or 10 in each city might be efficient. We are toying with the idea of franchising the model, but first we want to get through a whole season of fruit and veg to find out exactly what works. That will inform our plans for the future.”

Both men have roles in national potato politics and marketing, so it is no surprise that general promotion of their crop is a key driver of any future development.

“The core of our business is certified seed and big-volume ware potatoes for the supermarkets, and that will continue,” says Euan.

“The vending machines are a great add-on, a logical diversification. And a goal right from the outset was to provide a link between the farm and the consumer, to get information about potatoes out there and get more people eating them.”

Pete adds: “Promotion comes in many forms, but we wanted what we did to be practical and cost effective – and provide an income. We have a much more public profile now and that helps us interact much more with our customers.”

Seasonality means the produce is constantly changing. Strawberries and raspberries are selling like hotcakes at the moment, while asparagus proved too expensive, as did the Epicures. And Euan says they are still refining what people want, particularly the optimum pack sizes.

“To start with, we sold potatoes in 5kg or 7.5kg packs, but we soon realised the best seller in the shopping centre was a pack of six bakers.

“If people are able to get their cars right up to the machines on the farms they will take bigger bags, whereas in malls people happily pick up smaller bags.”

The Grewars add value and entertainment to their special offers: a free swede with every bag of potatoes in the weeks before Burns’ Night in January, and their “Easter Bunny Special” – free carrots with the spuds. And they keep the prices competitive.

“Everyone told us we could charge a premium because the food was coming direct from the farm, and we know customers like that. But everyone loves a bargain and price is important. The potatoes are straightforward to price because we grow them ourselves. For the produce we buy in from family and neighbours we add a margin to pay for the work involved.”

The business uses Facebook and Twitter to considerable effect and the cousins clearly thrive on the interaction with customers and curious onlookers from as far afield as Los Angeles.

“We didn’t think a vending machine was particularly revolutionary, but apparently we featured in a marketing seminar in the US earlier this year. People were tweeting about it. And that led to contact from all over the world. We got an email asking if we would organise a machine for prepared salads in San Diego,” says Euan.

“We already had a Twitter account for the farming business and we are used to posting pictures about what we do every day.

“There is always something happening and people like to know. They see the irrigating, the planting, the harvesting. It makes them feel involved and we can tell the farming story. All it costs is time and it is effective.”

Pete believes people use the vending machines for many different reasons.

“Some folk say they just like the convenience of the service – a 30- second purchase and they are on their way – while others like picking up their potatoes just yards from where they were grown. Neighbours, local villagers and passers-by. use the farm machines”

The Grewars got lucky with some good local publicity not long after the machines were installed in Dundee. The city has an unenviable reputation for unhealthy eating, so fresh veg in a retail centre made for a good story.

“People saw the irony of it and that was good for us. It created a lot of interest and alerted people to what we were doing,” says Pete.

If there were skeptics before the vending machines went live, there are none left now. Even the shopping centre cleaner who initially mocked the idea has turned out to be one of the best customers. That daily connection with the farmers who filled the lockers established loyalty.

And that’s precisely what the Grewars were aiming to achieve.