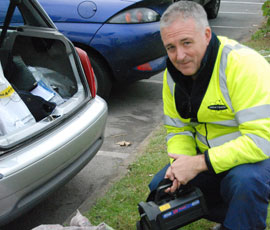 Fly-tipping is an unsightly, costly and growing menace. Rhian Price meets one man on the rubbish-strewn front line who is determined to bring the litter bugs to book.

It is 9.30am and the first fly-tipping suspect has already been pulled into the car park of a vehicle stop-and-search point in Droitwich, Worcestershire.

Dave Roberts carefully examines the mass of rubbish that has been thrown into the lorry, before beginning to question the driver.

Mr Roberts is an environmental crime officer with Wychavon District Council and his role is to deal with fly-tipping, waste control and litter. This morning he is doing a vehicle stop and check with multiple agencies, including West Mercia Police, Trading Standards, Customs and Excise and Smart Water.

“A large percentage of the people who are going out fly-tipping will be connected to some other offence, whether it be using red diesel, or having no insurance, so it is important to liaise with other agencies,” he explains.

Sure enough, within minutes one driver is prosecuted for red diesel and fined £500 on the spot.

On an ordinary day, Mr Roberts responds to as many as three calls a day, covering 260sq miles of countryside.* By early afternoon he is called out to investigate a fly-tip more than 20 miles away.

A countryside lane has been littered with numerous black bin liners, bursting with clothes and household rubbish. A discarded pram and a pyramid of used tyres line the hedgerow.

Believing the items to have been deliberately tipped after a garage clean-out, he carefully rummages through the illicitly dumped waste, probing for any evidence that could lead him to the identity of the offender.

Donning his gloves, he delves into the fourth bag. Sifting through the stinking clothes and sodden cardboard he finds an address, which could be a vital clue.

Once Mr Roberts has identified a suspect, he then summons them to questioning under caution. “The only way to disprove somebody is not involved is to interview them, which will either eliminate them from the inquiry, or allow me to go further and prosecute or issue a fixed penalty, depending on the severity of the crime.”

However, if offenders are from the travelling community, it makes it very difficult to trace vehicles, so very few cases make it to court. Even when they do, punishments are often not harsh enough, Mr Roberts says.

“I think magistrates need a terrific amount of training on environmental offences, so they appreciate the severity of the problem. It is paramount offenders are dealt with severely so it sets a precedence for other offenders.”

Once a fly-tip has been reported it is crucial it is dealt with swiftly to discourage repeat offences. “We try to clean up sites within two days, otherwise it creates a domino effect, with someone else fly-tipping on top of what is already there.”

Unlike some councils, Wychavon also deals with fly-tipping on private land, so many of Mr Robert’s calls are from distressed farmers requesting assistance. One of his most successful cases to date involved fly-tipping on farm land. Jason Jones, of Worcester Road, Stourport-on-Severn, was found guilty of two separate incidents in Worcestershire last year and fined a total of £5,500.

“Unfortunately, even though I may get a prosecution, the farmer still has the bill to clean-up, although it does allow the farmer an in-road to seek costs through civil litigation,” Mr Roberts adds.

Fly-tipping costs were estimated at £40m last year, but he reckons that figure could easily double if councils took into consideration the cost to private landowners.

“More emphasis has got to be put on recycling. More councils need to start bulk and green waste collections like Wychavon, free of charge.”

After five years in the job, Mr Roberts has a meticulous record for catching fly-tippers, having only lost one prosecution case. Although he says fly-tipping has decreased within his area in the past year, he is doing everything he can to make sure the perpetrators still flouting the law are caught and punished.

His latest weapon in the war against fly-tippers is an invisible water spray called Smart Water, which contains a chemical code that glows under UV light.

“I spray it onto rubbish I think will be fly-tipped and it acts as a deterrent, because people know if they dump it I can trace it back to where it has come from and it will be all over their clothes and skin.”

Although Mr Roberts has reached retirement age, he says he isn’t ready to hang up his fluorescent jacket quite yet.

“I’ll keep going for as long as I’m able to,” he says. “I absolutely love my job. I get a tremendous amount of satisfaction from it. Worcestershire is a beautiful area and I want to keep it that way.”

• Wherever possible, block off entrances to fields using gates or immovable objects

• Put up CCTV if you are being targeted regularly. Your council may be able to install a covert camera, so contact your local environment officer to seek advice

• If you find rubbish, contact your local environment officer straight away

• If you find evidence, leave it alone and let the officer deal with it, as you could complicate the investigation

• If you are employing someone to remove waste, ask to see proper documentation to ensure it is legitimate

• Ask for a receipt – this should contain company details, such as phone number and address, as well as the name of the person undertaking the work

• From December 2013, everyone except householders or landowners disposing of their own waste will need a waste carrier licence. Ensure you have one if, for example, you are working as a fencing contractor or landscape gardener.

• Visit our Crime Register to track and report rural crime.