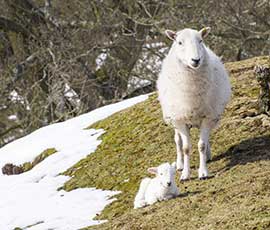 This spring is on track to be the coldest in more than 50 years, according to provisional figures from the Met Office.

The UK’s mean temperature for March to May is a meager 6C based on figures from 1 March to 28 May.

Easterly and northerly winds which have brought cold air to the UK from polar and northern European regions are to blame, said Met Office forecasters.

May is already wetter than average having notched up 86mm of rain up to 28 May, which is higher than the 70mm average. Whereas rainfall amounts in March and April were below average.

But farmers will be buoyed after a “good deal of dry and fine weather” was forecast for early June. However, unsettled weather is set to return by the end of the month.

Meanwhile long-term forecaster Accuweather.com has forecast a “cool” summer 2013, with below average temperatures in Scotland.

“A strong signal for cooler weather prevails over the UK this summer,” said Accuweather, in a statement.

“This is not to say that summerlike warmth will be absent in the coming months. Short duration spells of warmer weather are possible in July and August.”

But the forecaster said all was not lost for farmers as agriculturally, it is expected to be a “decent year for the region”.

“Wheat, sunflower seeds and maize should not suffer under these conditions,” it added.