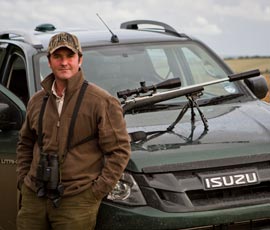 TV chef Mike Robinson will be passing on his top game cookery tips to crowds at next month’s CLA Game Fair show.

The ITV Countrywise star will be running field-to-table demonstrations at the show at Ragley Hall, Alcester, Warwickshire, on 20 and 21 July.

“I’m delighted to be invited to this year’s CLA Game Fair where I’ll be doing game cookery demonstrations on two days,” said Mr Robinson, who owns the Pot Kiln in Fulham, the only Michelin-starred pub in London.

“I’ll be giving a field to table demonstrations of roe deer. I’m going to take a wild deer and show people how we prepare it, butcher it from top to bottom. I’ll also be passing on my best game cookery tips.”

During the course of the demonstration he will stress the importance of good deer management.

“Good game cookery starts in the field with people who are effective in the management of their wildlife,” said Mr Robinson, who shoots venison himself for his restaurants.

Any deer and game that is bought for his restaurants only comes from estates that understand deer management at the highest level.

“What you do immediately after you shoot a deer is incredibly important to the end product,” he added.

“You have got to shoot the deer calmly and effectively so that the animal doesn’t know that you are there because of the adrenalin. And then you have got to get it into the chill/larder quickly.”

Mike Robinson will be appearing at the CLA Game Fair on Saturday and Sunday (20 and 21 July). For tickets visit www.gamefair.co.uk

Mr Robinson’s restaurants specialise in cooking sumptuous venison. He will explain to visitors that the old concept of game being “strong and smelly and dark” is “mostly utter rubbish”.

“The most important thing when cooking venison is to cook it lightly but thorough. I like it to be cooked through, but still pink so that it’s very juicy. Rest it very well after you cook it,” he said.

“We need to cook them on the bone. Poach them in chicken stock and then rest them,” he explained.

“That technique gets the heat into the bird but also keeps the moisture in. This guarantees a juicy and amazing result.”

To cook a perfect pavé (rump steak) of venison, Mr Robinson said: “Take 200g of venison, seer that in a hot pan and rest it in the oven for eight minutes.

“Rest it on the cooking board, serve it and you will have a great meat.”

Mr Robinson said he was “delighted” to see a resurgence in game in recent years.

“We have got a huge tradition for it in the UK. We have more game available in Britain than everywhere in the EU in a restaurant sense.”