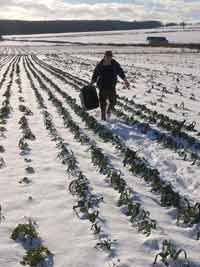 An Oxfordshire livestock farmer has been told to stop clearing snow from roads around his farm because he is not properly qualified.

Christopher Lewis of Glebe Farm in Hinton Waldrist, Oxfordshire, cleared the roads around his three farms in the area last week after heavy a snowfall left untreated roads “impassable”.

But when he called Oxfordshire County Council to see if there was anywhere else that could use the assistance of his snow plough, he was told to stop because of Health and Safety reasons.

Mr Lewis, who until seven years ago had held a 20-year contract with the council to clear the village’s roads during winter, said he had cleared the main roads around his farm and through his village so he had access to feed his 400 cattle.

“There are other farms in the village with a lot of cattle so I wanted to keep the roads open,” he said.

“I couldn’t believe it when I was told to stop. I have full employment liability and insurance for the tractor. I have a fully trained operator who has all the certification in place to use the machines on the farm.

“I shall continue to clear our roads when it snows. It’s a nonsense. The country came to standstill because of the weather.

A council spokesman said in an ideal world the council would be able to accept offers of help to clear snow.

“However, health and safety regulations are such these days that we’d always need proof of full training and insurance before any offer could even be considered,” he said.

“I wish it were different, but that is the world we seem to live in nowadays.”