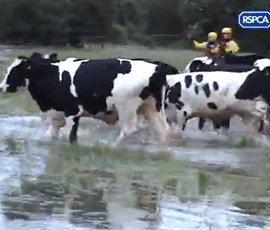 A herd of 21 dairy cows have been saved from drowning after a river next to their field burst its banks in West Sussex.

A seven-strong team of RSPCA inspectors and animal welfare officers were scrambled when a farmer called for help to save his herd.

The herd of 21 Holstein-Friesian cows had become trapped in their field in Old Wickhurst Lane, Broadbridge Heath, West Sussex, when the nearby River Arun burst its banks.

Inspector Rosie Russon, who led the specialist water rescue team, said: “The farmer was really worried that they were going to drown because the water had reached 5ft and was still rising.

“The cattle were stuck on a small patch of the field and we had to persuade them to walk through 5ft of fast flowing water to get to the gate and out on the lane so they could be moved.

“The team worked really well together to keep the cattle calm and pushed them through the water to safety. The farmer was very relieved.”

The RSPCA water rescue team, which spent almost two hours working to save the stricken cows, was scrambled shortly after 7pm on Monday (June 11).

Officers used safety lines to pull themselves through the water and position themselves in the chest-high water between the cattle and the river before herding them towards the gate.

The cows were moved them to another field further up the road.

Earlier in the day the team had been called in to help with 30 Fresian cows stranded in a field after a stream had broken its banks at  in Ansty, West Sussex.

As officers arrived the herd broke down fencing and managed to get into a neighbouring field away from the water.

The Environment Agency has five flood warnings for Anglia and south-east England. A further 44 flood alerts include the north-east, Midlands and the south-west.

Famers in areas at risk from high water are advised to monitor Environment Agency warnings and move livestock to higher ground where necessary.