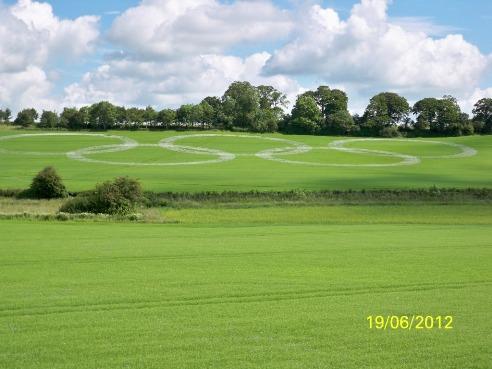 Somerset farmer Gerald Addicott has created the Olympic logo in one of his fields using blue and white varieties of linseed. Mr Addicott from Corston Field Farms near Bath, has planted the giant rings in celebration of London 2012.

Mr Addicott was born in 1948 the year the Olympics was last held in the UK and shares his birthday with the opening ceremony in London.

“Like all good ideas it was hatched while we were having a family supper in the local pub,” he said.

“We had applied for Olympic tickets and had been unsuccessful so me and my son-in-law came up with the idea of the Olympic rings. Often when you come up with an idea you don’t act on it but we decided this time we must do it.”

Mr Addicott grows the linseed crop not only for the seed but also makes use of the straw. In addition to the farm, Mr Addicot and his wife run a bed and breakfast catering for a wide variety of visitors “some from warmer climates who enjoy a warm home” and so they needed an efficient way of heating the house, he said. “So now we burn all the linseed waste.”

Mr Addicott is growing Brighton, a blue linseed variety, in the field and managed to buy a couple of bags of Abacus, a white variety of linseed, for the rings.

“We then set out the Olympic rings using five sticks and a piece of string into 6m circles,” said Mr Addicott.

“The blue variety is well behind the white variety so we will be expecting a blue field and green rings when the white has finished flowering,” he added.