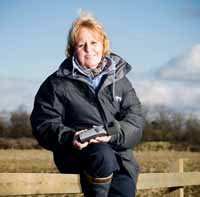 Every Sunday, at exactly 7am, 20,000 people from across Lincolnshire and the surrounding counties do exactly the same thing.

Whether they’re in the car, kitchen or tractor cab, they all switch on their radio, tune into 102.2 and listen to Sally Elkington presenting the farming programme on Lincs FM. Not in itself remarkable – until you realise that it’s one of the few, if not the only, commercial radio stations in the UK to still broadcast a dedicated farming programme.

Nineteen years ago, Lincolnshire local Sally was invited to record a six-week cookery slot at the station. Nearly two decades later she’s still broadcasting that same weekly cookery feature, but it’s her work on the station’s farming programme that consumes most of her time.

As researcher, interviewer, editor, presenter and producer, every 30-minute show involves a lot of legwork, not least because she’s reporting from the second largest county in the UK.

“It’s a big patch,” she admits, and in any one week she could be chasing news from the predominantly arable areas of central Lincolnshire, reporting on livestock in Rutland, in the south of the county, or talking vegetables and horticulture with producers across the length of the Fens.

Watch an interview with Sally in the Lincs FM studio


“It might be a vast county, but at the same time it tends to be a bit parochial. You’ll get talking to someone you’ve never met before, and it’ll turn out that they know someone in your family. It happens all the time.”

She wasn’t exaggerating. I meet Sally on a Wednesday morning at Lincoln railway station and our first stop is Newark Livestock Market, where Sally has arranged interviews with auctioneer Paul Gentry and local livestock farmer Richard Johnston. When we sit down in the café for a cup of tea we get talking to two gentlemen in their late eighties, and it quickly emerges that they both know Sally’s father-in-law – Bill Elkington. What’s more, both are regular listeners of the show.

“It’s a must,” one of them tells me. “Listen to the show on Sunday and you’ll be right for the week then – you can tell people the price of everything.”

Mr Johnston, who joined us at the table, agreed. “Other reporters don’t come here – so if it wasn’t for Sally going out and talking to farmers, then these issues just wouldn’t get covered.”

It’s certainly not a job you can do sitting behind a desk. Impromptu meetings like the ones at Newark are invaluable to build a picture of what’s happening in the region, find out what’s being talked about and are a rich source of material for the next show. Importantly, they also add a bit of colour to the final broadcast.

“Being radio, it’s our job to paint a picture with words and sounds, so I like to get out and about and interview people on a noisy combine, or among the hustle and bustle of the market,” says Sally. “I don’t always get here as much as I’d like to, but it’s a great meeting point. The café is a good place to find people to talk to, and gauge reactions on the big issues.”

With the proposed Nocton dairy right on Lincs FM’s doorstep, there is no shortage of big issues for Sally to get her teeth into, and it helps that her local knowledge is encyclopaedic. Lincolnshire born and bred, she can pinpoint a surname to a particular village and has a network of contacts spanning every corner of the county.

As a farmer’s daughter and wife you wouldn’t want to question her farming credentials either, although she does call on a bank of local experts – agronomists, grain experts, vets, land agents and solicitors – to make sure every programme is completely credible and to give her local knowledge a global perspective.

Luckily, one of those experts is very close to home. Husband Peter Elkington farmed mixed arable and livestock for years before moving into poultry last year, and apparently “there’s nothing he doesn’t know about farming”.

Tellingly, every single one of the show’s contributors gives their time freely and it’s “very, very, rare for anyone to say no”, which speaks volumes about how much the community values the programme.

The final product is a 30-minute slot that can cover anything from grain prices, agronomy, and crime, to machinery launches, farm diversifications and the activities of local YFC groups.


Listen to a podcast of the Lincs FM Farming programme

“Agriculture is a massive industry and very important to the region we broadcast to,” according to Sean Dunderdale, director of programming and news at the station. “Lincolnshire feeds a good percentage of the country, and to ignore it didn’t seem right to us. But even when I visit urban areas of Immingham or Scunthorpe, which is better known for its steel industry, I still hear people talking about the farming programme. It’s almost educational, in the way Countryfile is to TV viewers.”

Ten years ago when Sally took over from her predecessor Digby Scott, she made a conscious effort to make the programme accessible to this non-farming audience.

“I’m a farmer’s wife and I couldn’t always understand what was going on, so I always make a point of explaining some of the jargon our experts use. Why should someone know what a ‘smith period’ is?”

It’s about striking the balance between making it understandable to someone without that farming knowledge, without making it unhelpful to a serious cereal producer.

“It seems to work. I met one lady who listened to the show during Russia’s grain exports ban. We explained the price spikes and the impact it would have on the price of bread, and she was astonished. She had no idea the price of her loaf was a global issue.”

Despite being predominantly a popular music station, Lincs FM is just as committed to sugar beet as it is to the latest Michael Bublé single. In fact, Sean Dunderdale can’t foresee a time when the station doesn’t have agriculture on its airwaves.

“There’s been a lot of change in commercial radio over the past few years, and it’s sad that there aren’t outlets for this kind of programme in other parts of the country,” he says. “Agriculture works for us and I could see it working for other stations. There’s definitely a future for farming on the radio.”

Luckily for Sean, his presenter is equally committed to the show – she doesn’t go anywhere without her trusty voice recorder and even returned home from recent holidays to Colorado and New Zealand armed with reports on food and farming.

“Sally really doesn’t miss an event,” says Andrew Ward – a former Farmers Weekly Awards Arable Farmer of the Year and a contributor to the programme since 2004.

“You can guarantee she’ll be there and it’ll be covered in the show. So many people listen to it. I can’t count the number of people who say to me ‘I heard you on the radio this morning’.”

Sally has had lunch with Prince Charles (“a fantastic ambassador for farming”) and chatted with Princess Anne about sausages (“she’s a big fan of Lincolnshire produce”), but she says her biggest privilege is still reporting the farming news to her 20,000 listeners every week.

Sean adds: “In the past, Sally told me that she didn’t see herself as a journalist, but that’s not true. Whenever I meet new recruits I always say to them: If you have a contacts book half as good as Sally’s, you’ll be a great journalist.” 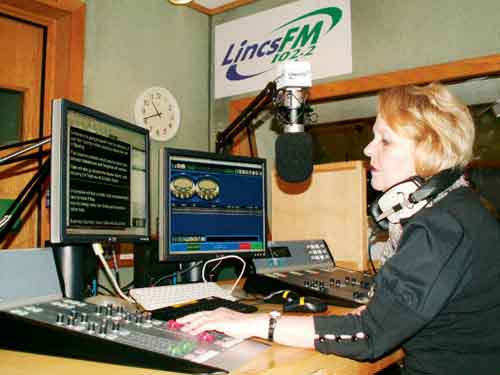 The village of Nocton is just a few miles down the road from the Lincs FM studio, and the super dairy has been high on the station’s news agenda ever since proposals were first submitted. In January 2011, Sally and the team took the leap from reporting the news to making the news when they hosted a debate about the controversial unit, chaired by a panel of experts including Peter Willes from Nocton Dairies. Locals praised the station for being “a shining example of a truly community engaged commercial radio station”.

What are your views on the Nocton failure? See what others are saying and give your own opinion on our forums.