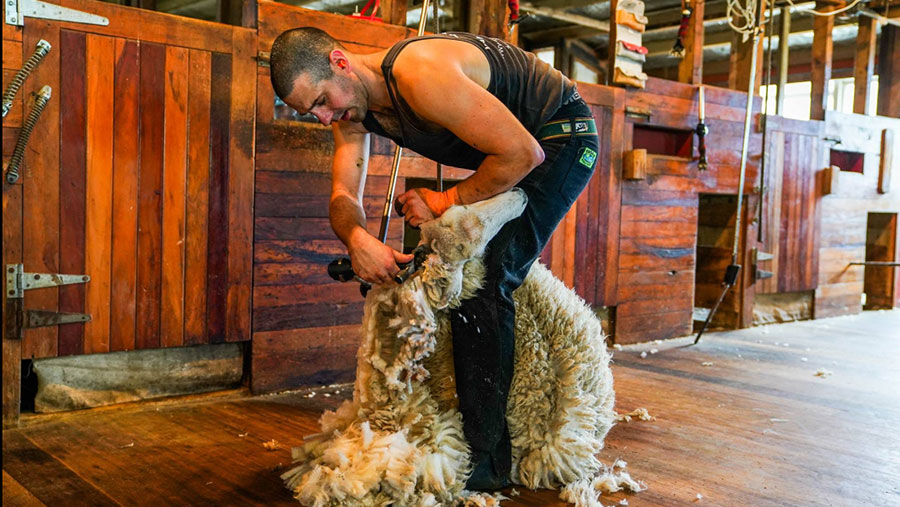 Oxfordshire farmer Stuart Connor has set a new British record for the most lambs sheared in nine hours, dedicating his almighty achievement to his three-year-old daughter, who died last year.

In what was an emotional day for him and his wife, Kira, on Saturday (21 September), Stuart sheared 785 lambs – four more than the previous British record – held by Welshman Gareth Daniel since 2016.

In April 2018, Stuart and Kira lost their daughter, Grace, to mitochondrial disease. Money raised at the shearing marathon will go to The Lily Foundation, which works to find a cure for the condition.

Speaking to Farmers Weekly shortly after becoming the British record holder, Stuart said he “wasn’t giving up” after it became clear he wouldn’t be able to beat the world record of 867 lambs sheared in nine hours.

“It was touch and go for a while and the world record just didn’t happen,” he said. “The sheep weren’t hot enough and we just couldn’t get the numbers.

“But we wanted to keep bashing away at the British record and the whole team just did as much as they could. I’m very sore for it now, but we managed to do it.

“It all started out with my daughter, so I just didn’t want to give up because of that and all the fundraising.”

Farmers and local businesses sponsored cash per sheep sheared, which Stuart thinks will have raised about £4,000. Combined with other donations made in advance and on the day, he’s hoping to have raised over £60,000 since starting the Team Grace fundraising group last year.

The shearing challenge kicked off at 5am at Fern Hill Farm in Compton Martin, Somerset, with the final result confirmed by three international judges just before 6pm.

Stuart ploughed through four solo stints during the day, with intervals to rehydrate and receive massages to aid his aching muscles.

He has wanted to undertake a record attempt in memory of Grace for some time. “She loved everything I did, whether it be driving the tractor, shearing sheep or being with the dogs,” he said.

No stranger to speed shearing, Stuart has previously shorn 900 lambs in nine hours as part of a personal challenge during one of seven stints in New Zealand.

He runs his own shearing round in the Banbury area in Oxfordshire, where he gets through about 20,000 sheep a year with the help of one other shearer. He also has his own 200-ewe flock of New Zealand Romneys.

Stuart’s success comes just days before a pair of young shearers attempt to set a new world record for the most sheep sheared in eight hours – the first attempt of its kind by two Brits on UK soil.

Jonny Roberts and Martin Howlett will need to shear more than 1,068 ewes to break the current two-stand record, with their attempt kicking off on Tuesday 24 September, after being delayed last month.