A good shearing technique can add value to a fleece, while correct handling and control of the sheep protects the shearer’s back from injury.

With farmers now finding it difficult to source a shearer, many are having a go at clipping fleeces themselves.

Getting the basics right is important, says Richard Scofield, a trainer for the British Wool Marketing Board. Here Mr Scofield guides novices through the different stages:

See also: How to roll a fleece correctly

Work calmly and quietly to retrieve the sheep from the pen, holding its right front leg with the right hand and the wool at the top of the brisket with the left hand. Site the sheep up on the shearing board, turning its head to one side. 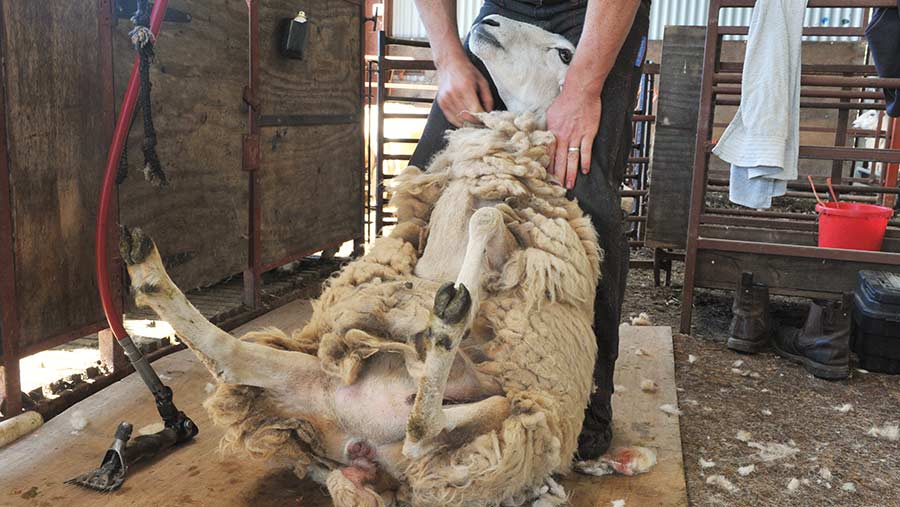 2. Start at the top of the brisket

The aim is to remove the fleece in one piece, ideally with the belly piece rolled inside the fleece.

To do this, start at the top of the brisket – if right-handed use the right hand to shear and the left to tighten the skin. The belly wool will come off in one piece – place to one side. 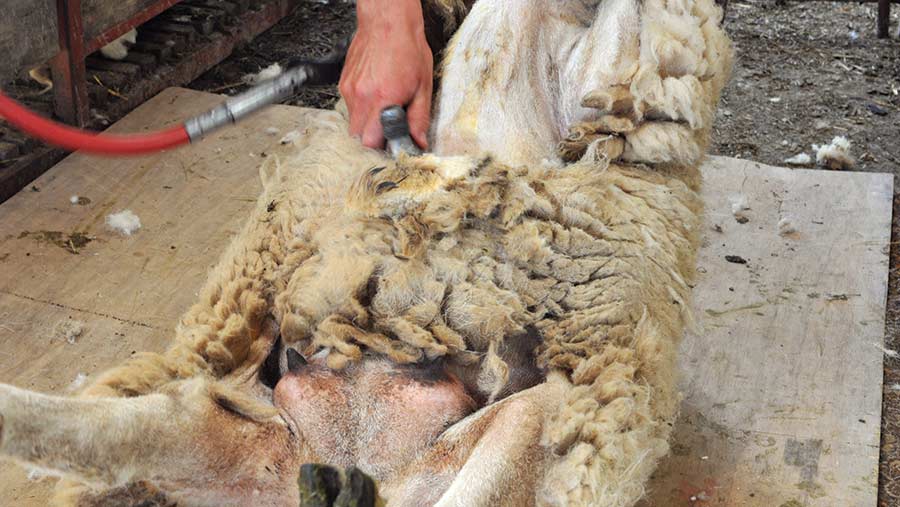 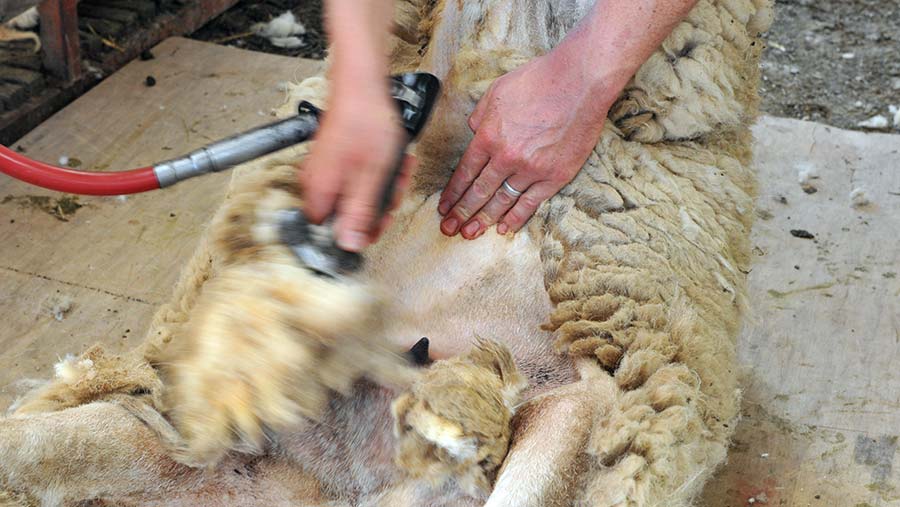 3. Move to the first back leg

Ideally four blows – a blow is a single sweeping cut – will take you from the inside of the back leg to the tail. 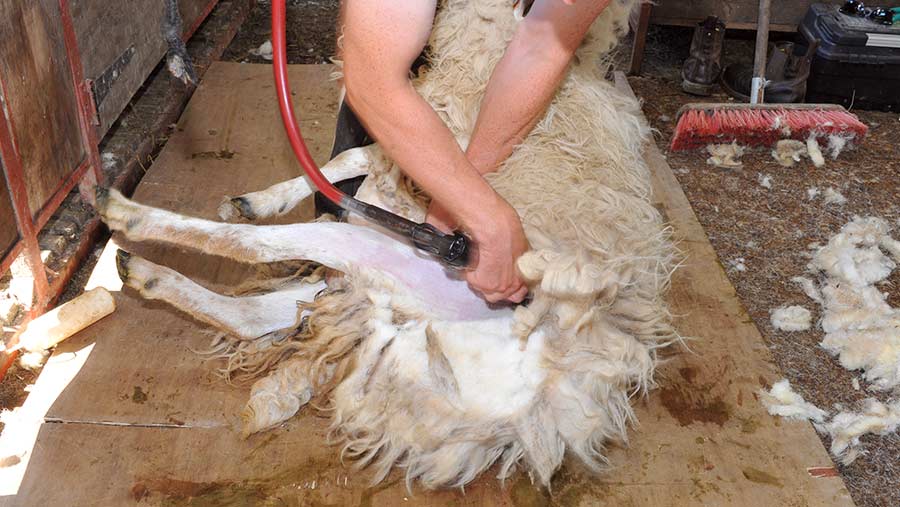 For sheep with tails, start with the comb on the underside of the tail and shear from tip to top, turning the tail and moving down twice, perhaps three times.

With the last blow move onto the backbone. Step back a little and apply another blow, moving over the backbone and up the backside – the undermine. 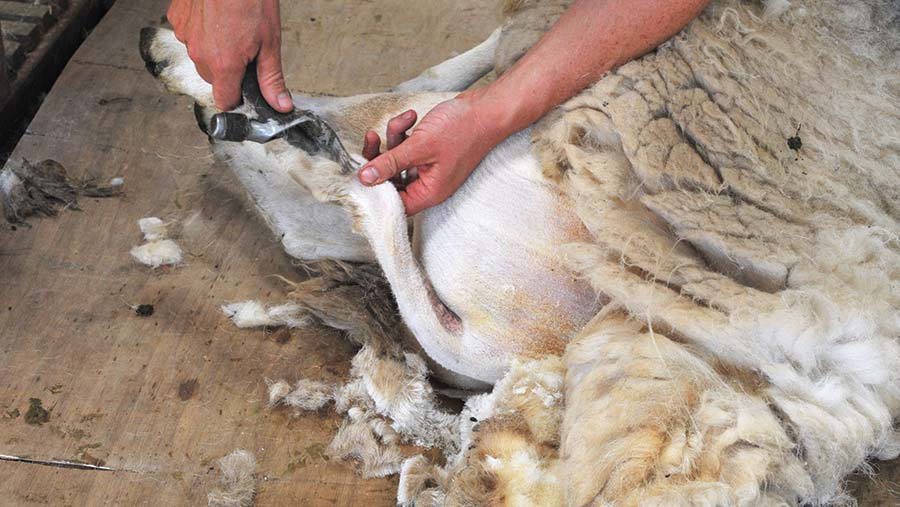 This will require two blows, either side of the spine. 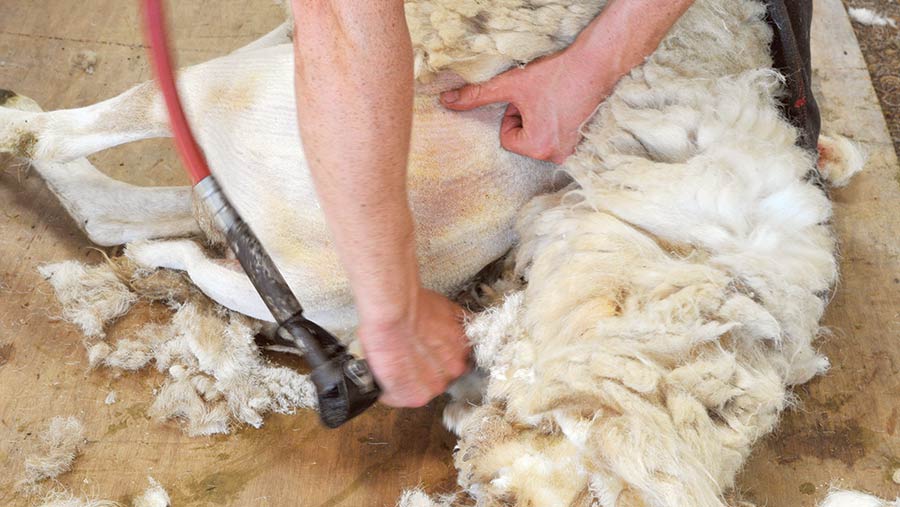 Position your right foot between the sheep’s back legs to prepare you for shearing the inside of the neck. 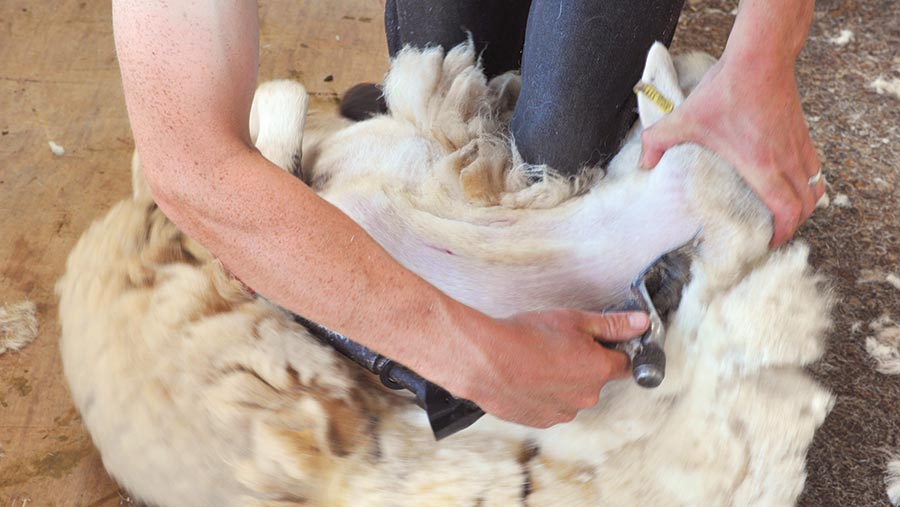 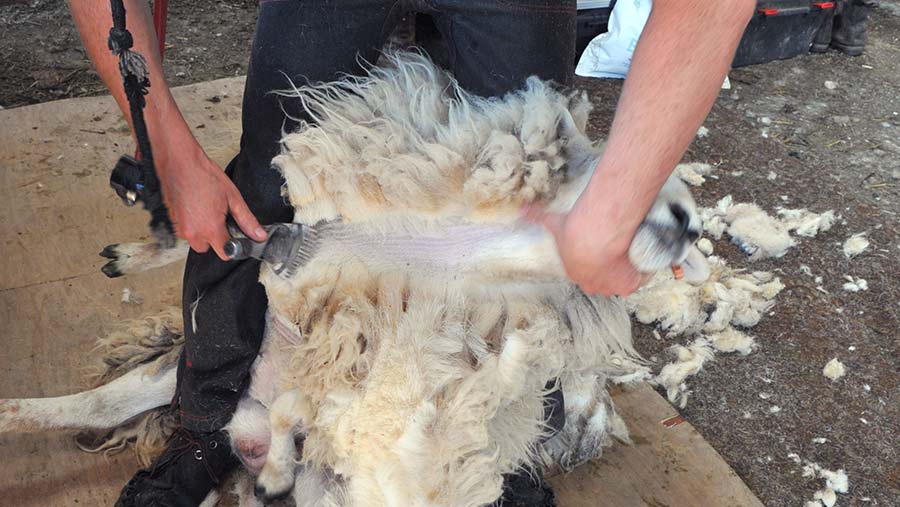 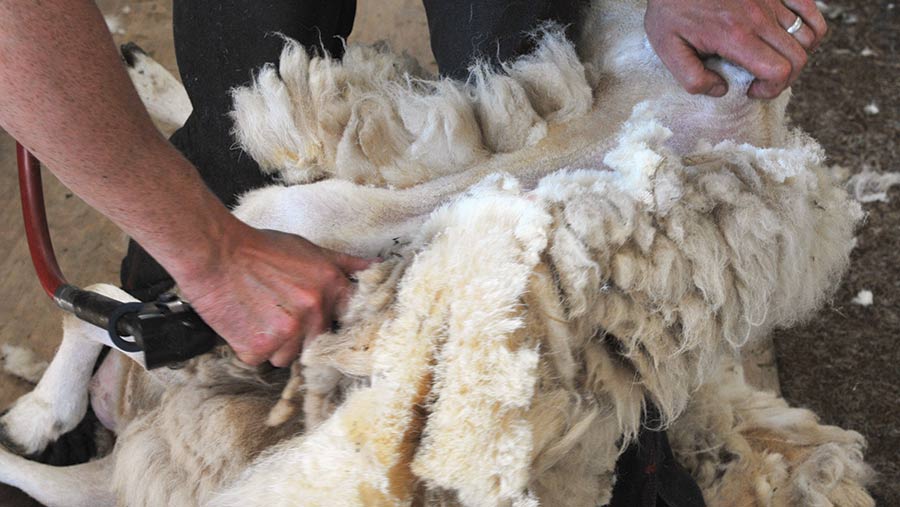 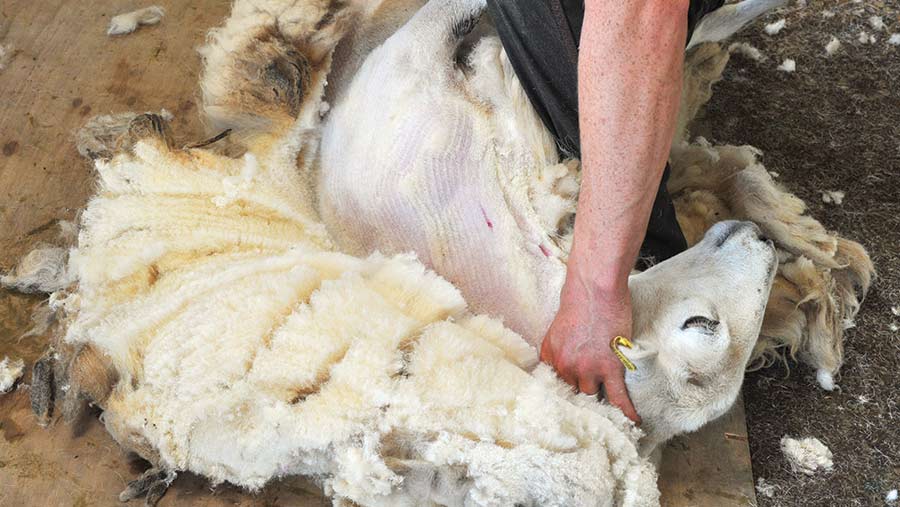 9. Cheek and the right front leg

As the last long blow is completed, walk forward with the right foot, sweeping the fleece with you.

Rest the sheep’s head on your knees, remove the cheek wool, put the head between your knees and step back, trying to pull the sheep back up with your legs.

Start with a full-width blow on the right front leg, running narrower as you run out of leg. 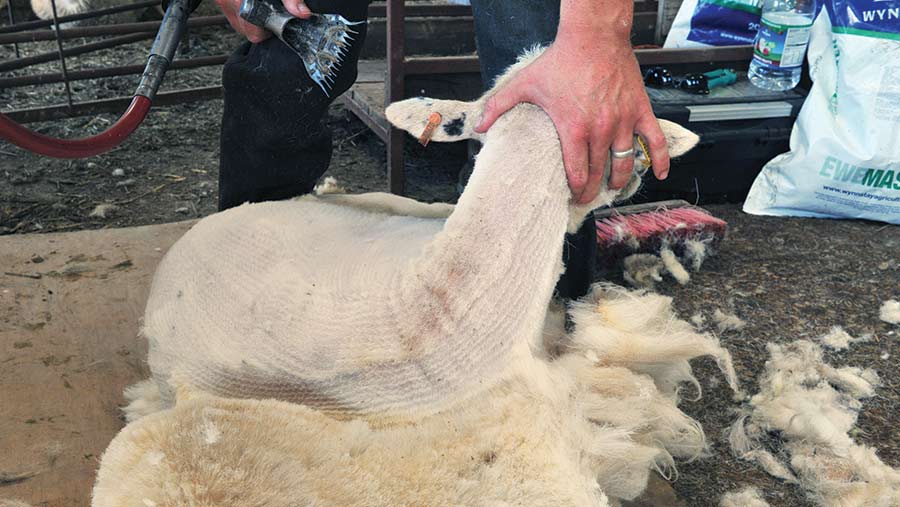 Work the comb over the last shoulder, moving straight down the inside of the right hind leg and apply the last finishing blows to that side.

Every subsequent blow continues straight from the top of the shoulder, down the side of the sheep and out of the back leg. 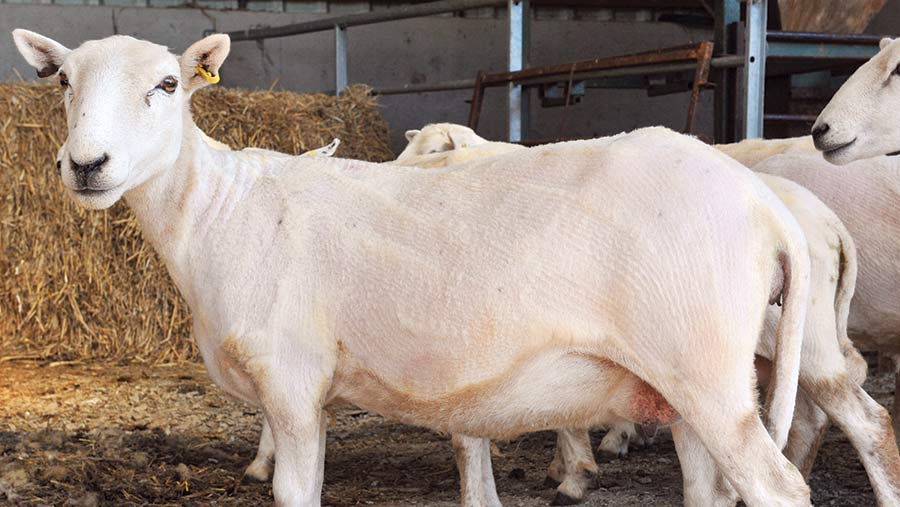