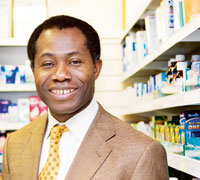 The residents of the Hampshire village of Kings Worthy are a lucky lot.

The 4000-strong community on the outskirts of Winchester boasts an array of local shops ranging from a convenience store and post office to fishing tackle and fireplace emporiums. You can get your hair done at the local hairdresser, your car fixed in the garage and even pick up a take-away.

But until recently the villagers, particularly the many older residents, felt something was missing. In a village questionnaire, they put a chemist’s shop at the top of their wish list. Now, that wish has been granted as this summer Springvale Pharmacy celebrates its third anniversary.

Luckily for Kings Worthy, it just so happened that there was a pharmacist looking to set up his own business in the area. “Looking for a new pharmacy contract is like looking for a needle in a haystack,” Eric Norgbey (pictured) explains.

As Eric searched on the internet for a location within striking distance of his home in Chandler’s Ford, up popped Kings Worthy’s Village Design Statement (VDS), a document devised by residents to help influence planning decisions on the design and development of their area.

“I read in the VDS that, even though another pharmacy offered a prescription service through the surgery in the village, the residents would really love to have their own pharmacy,” Eric recalls.

He contacted the parish council, gained its support for his application to the local NHS Primary Care Trust (PCT), and the rest, as they say, is history.

But it wasn’t all plain sailing. The PCT consultation took nearly a year, a business assessment cautioned that the village wasn’t big enough to support a pharmacy business, and there were no commercial premises available.

Undeterred, Eric pressed on. Spotting a ground-floor flat at the end of a row of local shops, he approached the owner, bought the flat, and got planning permission to convert it into a shop and dispensary with a consulting room and office space.

Then with his wife, Rose, an obstetrics and gynaecology doctor, and her brothers, he set about “the knocking down”. Springvale Pharmacy finally opened in August 2007.

“We did everything apart from the final fitting,” Eric says. “Many of the villagers didn’t know who I was and were a bit surprised when I turned overnight from builder to pharmacist.”

Success didn’t happen overnight. “It took a year for some villagers to find us,” Eric admits. And last year he had to campaign against plans by Tesco to open a pharmacy at its Winnall superstore two miles down the road.

Nine hundred locals signed his petition but the 100-hour pharmacy opened nonetheless. “We’ve seen a marginal falling-off of over-the-counter sales,” Eric says, “but we concentrate on serving our local community and we have a very loyal clientèle who try their hardest to use our service.”

Word-of-mouth recommendation has won him customers outside the village and even in places with their own chemists such as Twyford and Winchester.

“It’s because his service is truly personal,” says Stanley Howell, Winchester City Councillor for Kings Worthy and Abbots Worthy who lives in nearby Martyr Worthy and recently nominated Eric for a Countryside Alliance Rural Hero award.

“Eric goes well above the call of duty and puts himself out for people. If he hasn’t got something he will get it and deliver it free to you. He’s one of a rare breed these days.”

Of the pharmacy’s four members of staff, one is employed solely as a driver but out-of-hours customers often get Eric himself delivering medicine. It’s not unknown for him to be still on his rounds calling on the elderly or housebound at 9pm.

“Some of my customers have my mobile number and we never close,” Eric says. It means that he is also getting to know the area very well. “The first time I came to Kings Worthy I got completely lost in the lanes but now we will deliver anywhere this side of Portsmouth.” he adds, only half jokingly.

Evidently, Eric relishes dealing with his customers. Having trained in Ghana, he first worked in the UK in hospital dispensaries and then as a locum pharmacist around the country.

“Although I liked meeting lots of different people, after a while I thought it would be nicer to have regular customers and really get to know them,” he recalls. “Now I know all my customers by name and I find talking to them I discover things which help in my decision making as regards their medicine management.”

Eric says he collaborates closely with the part-time doctor’s surgery in the village and the other surgeries in Winchester. He is also in discussions with the county hospital to expand his services to offer phlebotomy and warfarin clinics.

“We open all day and are the closest health service facility for many people, particularly the elderly,” he says. “I believe we complement the work of GP and hospital services.”

But it’s not always medical business under discussion in the pharmacy. Eric designed the shop to be deliberately spacious to allow not only for wheelchair access but also to make the shop a meeting point. “Space is as important as product,” Eric says. “We do a lot of talking in here, lots of football discussions!”

According to Rose, it’s “a real social centre for the village”. And not surprisingly, aside from football, much of the talk of course revolves round their baby Afi Sesika.

And the Norgbeys have thrown themselves into village life: Eric caused quite a stir turning up in his national costume at the village fete and put Kings Worthy on the map when GMTV broadcast from the shop last July, at the height of the swine flu scare.

Commenting on Eric making it to the Rural Heroes finals earlier this year, Countryside Alliance Award director Jill Grieve said: “Eric and his wife have, through their pharmacy, brought a breath of fresh air to the community and this has inspired many of the residents. He is proof that being kind and considerate is noticed and appreciated.”

In 2008, the Government launched a White Paper to boost rural pharmacies by giving chemists the opportunity to prescribe drugs and administer tests for minor ailments.

But many considered the proposals a threat to GP services. According to the Countryside Alliance, they could have disenfranchised up to 3m rural patients of their right to get medicines dispensed at their doctor’s surgery and compromised the viability of up to 1300 dispensing practices.

Later that year, the Government backtracked on its proposals, agreeing not to change GP dispensing rights.

New pharmacy applications follow a standard process and consultation with local pharmacies and any dispensing doctors in the area. However, pharmacies opening 100 hours per week are outside the jurisdiction of NHS Primary Care Trusts.


Tell us what you think are the key ingredients of a successful village shop. Have your say on our website forums

The Rural Shops Alliance, a national trade association representing the owners of 7000 independent rural shops in England, has this advice to weather the tough retail climate:

1 Retail is detail Make sure you have the basics right – the shop is clean and tidy, you are stocking the correct lines and you are in-stock of key ranges.

2 Special offers A gondola end of offers makes customers feel that your shop is working hard to provide value for money.

3 Be ruthless Ditch slow sellers and invest in stock that is going to move. Listen to what your customers want.

4 Cover the right bases Fine-tune the product groups you stock. Many local shops provide services such as dry cleaning and home delivery for people less able to travel outside the village.

5 The price is right Price appropriately and move quickly when cost prices change.

6 Every minute counts Work out how much your staff cost per minute (remember NI and holiday pay) and decide how to make sure they are productive.

7 Cost control Negotiate your contracts for banking, electricity and telephones.

8 Open all hours Do you need to stay open an extra hour in the evening to catch returning commuters?

9 Speaking up Make sure your customers know you are there and that you appreciate their business. Being involved in local charities, fund raising events and festivals raises the shop profile.