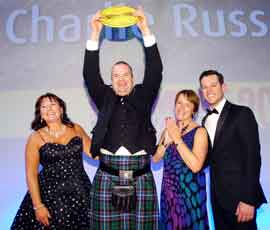 Tell us about an outstanding farmer you know for a chance to win a pair of tickets to the 2012 Farmers Weekly Awards.

Nominations can be made in any of 15 categories, including Beef, Sheep, Poultry and Arable Farmer of the Year; Farm Manager of the Year; Young Farmer of the Year and Farm Worker of the Year. Every nomination we receive earns another entry in the prize draw to win a prize package worth in the region of £500*:
• Entry to the awards for two
• Three-course sit-down dinner for two
• Entertainment
• An overnight stay in a nearby hotel for two 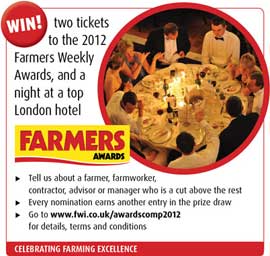 Nominating someone for an award is easy. Just fill out the form on the awards website to tell us who you are nominating, which category you are nominating them for and a quick summary of why you think they deserve the award. Farmers Weekly will then follow up all the nominations and invite each one to enter the awards.

See the 2012 Farmers Weekly Awards website for more information on each of the categories, and click on the “Nominate” tab to fill out your nomination. The winners of the prize draw will be announced shortly after the closing date on 30 April.

• The prize of a one-night stay in London is for two people sharing a double room on the night of the awards.

This year the Farmers Weekly Awards night will take place on 4 October at the historic Grosvenor House Hotel – a five star venue on London’s Park Lane – and as always it promises to be a star-studded occasion.

In the past the awards have been hosted by the likes of Matt Baker, Julia Bradbury, Kate Humble, Fiona Bruce and Claire Balding. Celebrity farmer Jimmy Doherty and Countryfile’s Adam Henson have both been on to the Farmers Weekly awards stage to collect trophies.