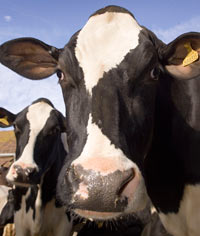 A pensioner has been killed by a herd of cows as she walked her dog across a farmer’s field in Cardiff.

The woman sustained head and chest injuries after the cattle knocked her to the ground and trampled her. It is understood she was crossing a boggy part of the field on a farm in St Fagans, near Cardiff, with her friend and their dogs when the herd charged.

While her friend was unhurt, the woman, who has not been named, died at the scene.

The land is owned by the Earl of Plymouth’s estate and rented out to a farm. Local police said there were no suspicious circumstances and it appeared to be a “tragic accident”. The Health and Safety Executive is interviewing the farmer who owns the cattle.

The death is the second in as many months, coming after vet Liz Crowsley was killed by cattle while walking her dogs on the Pennine Way. And in June, former home secretary David Blunkett was injured by cattle in the Peak District while walking with his guide dog.

Despite the recent spate of tramplings, such attacks are rare.

In the 10 years to March 2006, the HSE investigated just 46 cattle attacks, seven of which resulted in deaths.

When cows attack: Are farmers liable if their cattle attack walkers?