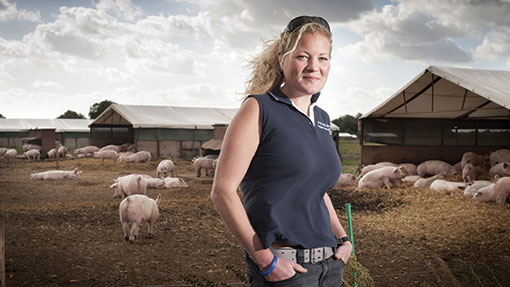 The role of women in farming is changing. But are career opportunities now widespread and rewarding or are they limited and problematic? Farmers Weekly asks two farmers’ daughters for their views.

Growing up on the farm, I always felt incredibly lucky – not only to live where I lived, surrounded by fields – so much room to play and adventures to be had – but also just to be born into that way of life. Because that’s just what farming is, as well as a business, it’s a way of life. Not a 9 to 5 job, but a 24/7 exciting, demanding, gruelling and so rewarding way of life.

From the beginning, my brother Jon was always team arable, into his big machinery, but as soon as we got the pigs, that was it, I was hooked. I’d spend my weekends and school holidays working with them. But my careers adviser had other ideas. When it came to deciding what I wanted to do, it was clear that farming wasn’t something that was promoted to the privately educated population. And thus I endured my work experience in accountancy – and that’s exactly what it was to me: an endurance.

“You can’t produce food without farming and farmers (sometimes people forget this) and there are so many diverse career opportunities in this sector, which can only increase, given that population is continuously increasing.
Anna Longthorp

Not wanting me to feel pressured into going into farming, my family always encouraged me to try other things (either that or were perhaps using some reverse psychology knowing my rebellious side), but following a stint of about four years in Australia, mainly gadding about on horses, chasing cows, I took up tennis coaching, having played to a reasonable standard in my youth. I enjoyed it for a while, but always felt something was missing. So again, I found myself back on the farm, and realised that’s where my heart belongs and farming is actually in the blood. It was at a time when we had just begun fattening our pigs outside so they would be fully free-range and, teamed with the sudden popularity of celebrity chefs promoting high-welfare standards, people really starting to think about where their food came from. Spotting an opportunity we decided to diversify a little into following on the process to the meat side of things. Teaming up two of my passions – farming and food.

You can’t produce food without farming and farmers (sometimes people forget this) and there are so many diverse career opportunities in this sector, which can only increase, given that population is continuously increasing. The training opportunities within the industry are also second to none. I’ve been fortunate to take part in various courses in a range of areas and levels, but one thing that doesn’t change is the fantastic people you meet along the way.

I won’t say it’s been easy, it’s been blooming challenging, setting up a new microbusiness within a farming business, and I guess, being a woman in the farming and meat industry is a challenge in itself – getting people to take me seriously and demonstrating that I do actually know what I’m talking about.

Farmers Weekly and Barclays are about to launch a nationwide survey which will explore the role of women in farming. It will give us a comprehensive insight into the working life of contemporary women, plus the opportunities they have and challenges they face. Full details will be revealed soon.

There are perks to being a woman in this industry. Most farmers will know that there are plenty of women in farming, but public perception is that it is a “real man’s job” and I have found journalists think there’s a story to be had in this respect, hence why I have been very fortunate to get my fair share of publicity through various newspapers and magazines – and there is no better advertising than that, especially when I don’t have to pay for it (we all know what deep pockets and short arms farmers have).

More recently. I have become a mum. I’m in an amazing position as I can have the best of both worlds and continue working while bringing up my child. I’m also fortunate the little man is a particularly good baby and seems very happy to just fit in with me. I hope by doing this – and having a mum and dad who work in the farming and meat industry – he will learn to have a good work ethic (my partner Chris runs the abattoir I send my pigs to).

That’s another thing ladies considering a career in farming should bear in mind – it’s an industry that’s full of great men. Just don’t tell Chris I said he was great – I wouldn’t want him getting complacent. 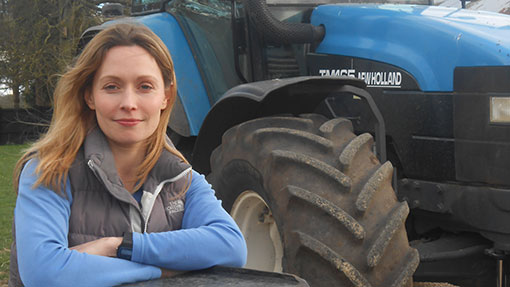 I chose not to be a farmer. As a farmer’s daughter, agriculture is in my blood. I am in love with rural life, with being close to the land and the rhythms of the seasons so being a farmer would have been a natural and satisfying choice.

Why then is it my brother, not me, who has taken on the family farm? In this day of equality, it seems wrong to state that it is because I am a woman. There has been no prejudice against me, no “oldest son” syndrome. Throughout the rest of my life, I have never felt held back or defined by my gender. However, farming is still different.

The industry has certainly changed in the past decade or so. A woman has just been appointed as deputy president of the NFU. My own mother was the first woman to ever stand in an NFU election, back in 2002. With this legacy, challenging the gender divide should be second nature to me.

As part of my Mum’s campaign in 2002, she was asked in interview if any of her three children would take over the farm. She replied vehemently, “No, no, no. They see how hard their dad works, how difficult it is…. That is not a future I would want for them.”

Actually, in teenage years we were put off by the slog. Then, you realise most jobs are hardwork and using your body as well as your brain is a satisfying combination. I’m also far more driven by work I believe in than by financial rewards, so it’s not the modest earnings of a family farm that put me off. Instead, I have chosen to write about farming and the countryside as a journalist, rather than truly live and breathe it as my job.

At the point in my career when I had to decide whether to farm, I knew I wanted to start a family within a few years. I know many women do manage to juggle both, but with my husband working in a “normal” job I just couldn’t see how I could combine motherhood with farming.

Farmers on small, tenanted farms are lone wolves. Would there have been someone else to lift the heavy sacks when I was pregnant? Dream on. How about having a few weeks off, due to horrible, endless morning sickness? Puke behind the trailer, and carry on.

Then, how would maternity leave be possible? Who would do the work? Taking time off would require employing extra labour and returning full-time would need extensive childcare: expensive and not easy to find in a rural area.

“Farming needs bright, young women. We need to be able to farm in our own right, without hanging off the coat-tails of father or husband. Despite encouraging shifts in the past decade, there is still a long, long way to go for farming to catch up with other industries.”
Kate Blincoe

There is also the matter of parents. How does a traditional farmer feel about passing the business on to a girl, especially one who would like a family? I hope there are many enlightened dads out there, but when I asked mine what his response would have been to a request for maternity leave, he replied that he would have told me to “get stuffed”.

My friend worked on her family’s farm for several years after agricultural college, but eventually found a new career. She sensed her father would never let her take over, partly because she had married and changed her name. He wanted the farm to keep the family name. As a result, her younger, far less qualified brother took over instead.

As Minette Batters, NFU deputy president, said: “Women are the absolute backbone of agriculture.” I couldn’t agree more, but how often is that in partnership with their husband? Or in a more office-based or strategic role? Having a partner who is involved in the business makes it far more possible for a mother to juggle family with farm.

I don’t regret my decision. I am writing this while my three-year-old daughter snoozes on the sofa. Writing is flexible and I am often able to be there for my children in the day and work hard in the evenings.

I am glad my brother has taken up the mantle, and as he expects his first child I can see that in many ways his job will fit in so well with having a family. He will be in for lunch and generally around a lot more during the day than the average 9 to 5 office worker.

Farming needs bright, young women. We need to be able to farm in our own right, without hanging off the coat-tails of father or husband. Despite encouraging shifts in the past decade, there is still a long, long way to go for farming to catch up with other industries.

I hope there are many young women reading this who think I’m wrong. I hope they have made the decision to farm on their own, and are finding ways of making it work with babies. I’d love to know how they do it.