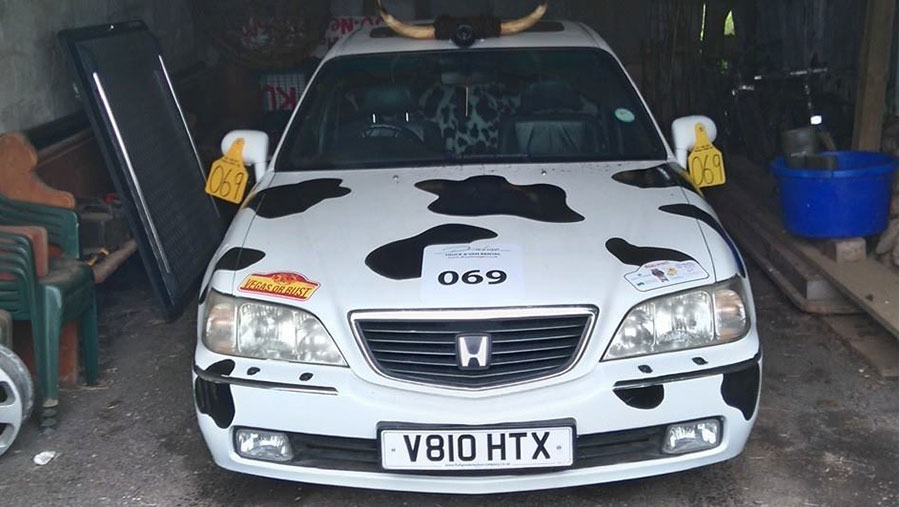 Four members of Cornwall Federation of Young Farmers Clubs (YFC) are travelling to Spain in a cow-print car to raise money for six charities.

Edward Martyn, Stuart King, David Northey and Jack Kent from Warleggon YFC in south-east Cornwall will set off on the 6 October as part of the St Austell Round Table Banger Rally Challenge 2016.

The team spent £500 – the maximum amount allowed to be spent on the rally vehicle – on a Honda Legend and redesigned it into a cow, now named “Lucy the Legend”.

Dairy farmer Jack said that they thought the challenge would be a bit of fun and, through YFC, they are used to getting involved with lots of fundraising missions.

They hope to raise £2,000, and they are currently at about £800 through donation and sponsorship, so they have got off to a good start.

The challenge is less of a race and more of a treasure hunt, Jack says.

They know they are going to “Vegas” in Spain, but there are several places of that name and they won’t find out until nearer the time which one they are headed for.

If you want to support the team, sponsor them or follow their week-long journey, you can find them on social media or donate online on Facebook, Twitter and JustGiving.