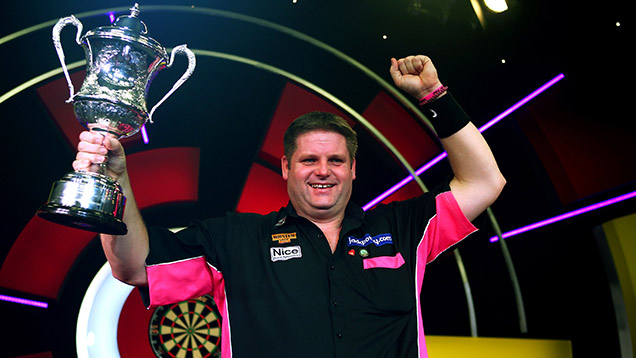 Darts ace Scott Mitchell, crowned BDO world champion on Sunday night, has attributed his success to his years as a YFC member.

Scott, who secured the £100,000 first prize in a thrilling final, reckons being in Avon Valley Young Farmers’ Club taught him a huge range of valuable life lessons.

These included how to keep calm, how to deal with being in front of an audience and how to hone his competitive spirit.

See also: What farmers think about the Olympics

“I loved my Young Farmers days – they made me who I am,” the 44-year-old told Farmers Weekly after beating Martin “Wolfie” Adams at Lakeside in Surrey in a match that was broadcast live on BBC2.

Darts, he said, is a lot about hand-to-eye co-ordination, but it’s also about mental control – and taking part in a range of YFC competitions, holding roles such as club chairman, and doing public speaking helped him develop this. “I still attribute the way I can stay calm and collected to my Young Farmers days.”

Were it not for joining the YFC movement, dad-of-two “Scotty Dog”, who grew up on the family farm near Bransgore on the Dorset-Hampshire border, might not even have started playing the sport.

When he was 16, a fellow YFC member was short of a player on his team so asked Scott to make up the numbers. “I replied by telling him that I don’t play darts. He put some darts in my hand, I threw them and all three hit the board!”

He’s played darts at various levels since then, notching up some notable successes, but is adamant it’s largely a hobby and he does it “for fun”, in tandem with running his own garden landscaping and maintenance company.

According to Scott, the hours since his win have been “surreal” and “a whirlwind”, but he has got no plans to give up his day job. “I’ve worked too hard to get the business where it is to do that. Plus I love it.”

He hopes his TV appearance on Sunday, which culminated with him breaking down in tears after hitting a double top to take the crown, will encourage more young people to take up darts.

“I originally thought it was an old man’s sport, but it’s sexy again. It’s getting more TV coverage than it has in the past 20 years. It’s not an expensive hobby, it’s a very social activity, it’s a lot of fun and you can play at any ability.

“I’m absolutely stoked,” he said. “When I hit the winning double, I couldn’t believe it. I’ve even had a call from Chris Evans.”

As for his next priority? “I promised to buy my dad a new tractor if win. I said I’d get him one that actually starts when you turn the key!”