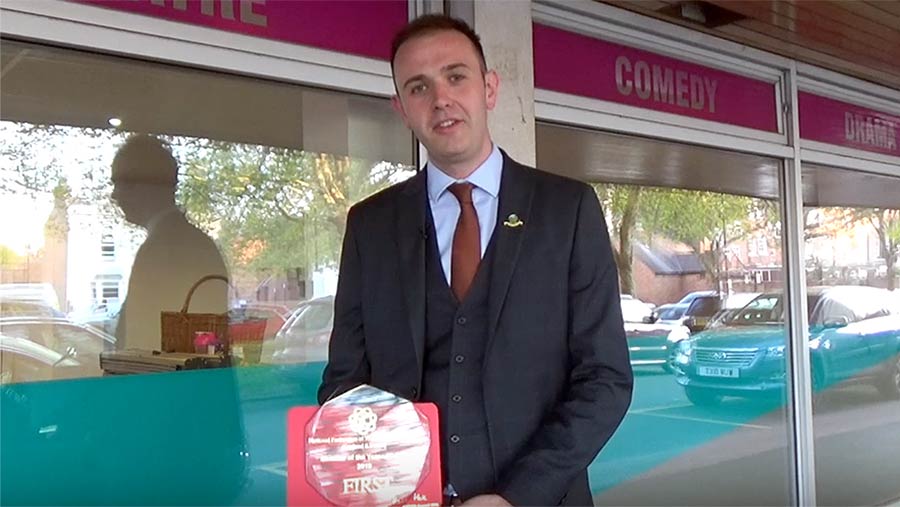 Eamon Monaghan with his award

A £10,000 project to educate young farmers about the dangers of drink and drug abuse has helped Cumbria YFC’s county chairman Eamon Monaghan win NFYFC’s Senior Member of the Year competition.

The 24-year-old from Skelton YFC will use the grant to fully fund alcohol and drug awareness sessions for YFC members in his county over the next three years.

Recognising the need for better education on drug and alcohol abuse, Eamon wanted to do something proactive to support younger members.

The project works in partnership with The Well Communities, a not-for-profit community service provider specialising in supporting people with addictions and mental health issues.

“Cumbria YFC is very proud of our proactive approach to drug and alcohol use in our county,” Eamon said. “In modern day society it is a very naive attitude to think that drugs aren’t around you and it is important that everyone is aware of the effects and how to deal with them. It’s important that county federations take a pro-active stance against drug and alcohol abuse.”

The young farmer made it through his club, county and regional rounds before competing against six other finalists at the national final of the competition in Leamington Spa on 12 May.

The final put Eamon through a tough interview with a panel of judges, as well as nerve-racking stage interview in front of packed auditorium during the national Entertainments finals.

On stage, with hundreds of people watching, Eamon was quizzed about his views on social media, to which he replied positively about the improvements it can make to communication with members – when used for good.

On winning the competition, Eamon said: “I set off with a goal to come and do my best for Cumbria and our members and I went and smashed it, so I’m absolutely over the moon. Hopefully it encourages others to give it a go – anyone can do it.”

Watch the video below of Eamon’s reaction after winning the top award.