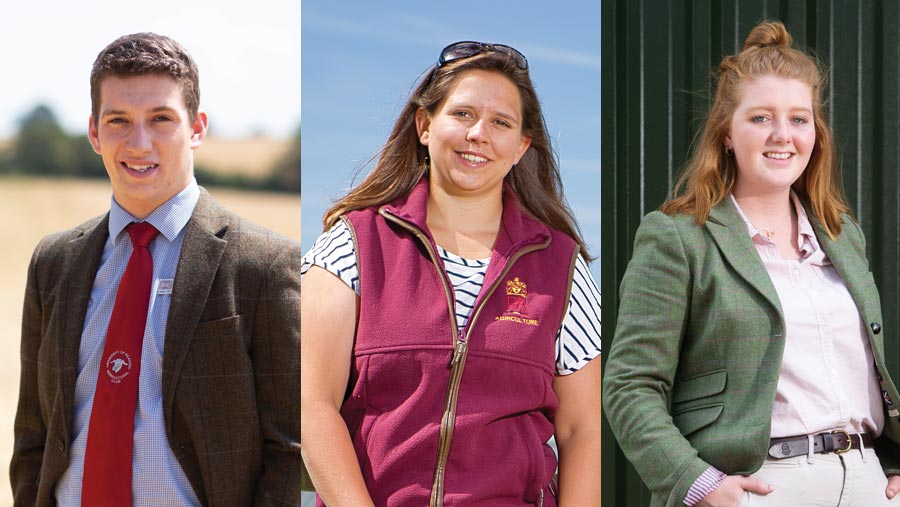 Britain’s agricultural students are our future farmers, advisers, managers and skilled workers – without their energy the industry would be lost.

All three of our Ag Student of the Year finalists are brilliantly ambitious, have an unshakeable commitment to agriculture and impressed the judges with their smart ideas.

The 2018 Ag Student of the Year Finalists 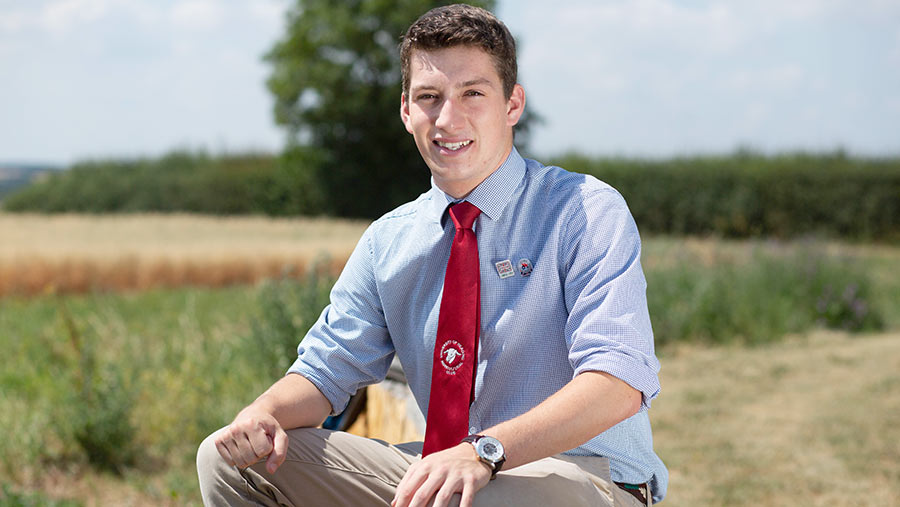 Rather than follow the herd to study at one of Britain’s more obvious agricultural universities, Gloucestershire farmer’s son Luke made a conscious decision to go mainstream.

The twenty-two-year old left the family farm to study for a degree in agriculture with industrial training at the University of Reading.

He opted for Reading because he wanted to be in an environment where his peers were from a diverse range of backgrounds with interests beyond his own.

Living and learning with people outside the farming bubble meant he wasn’t preaching to the converted when he set about banging the drum of British agriculture.

Graduating with a 2:1, Luke is described by his peers as a highly motivated and extremely proactive member of the student community.

He went above and beyond what many would expect to achieve during their time at university, completing extracurricular activities to develop his management skills and brush up his CV.

He has also been an active member of his agricultural society, organising events such as the University of Reading’s very first Back British Farming day in his final year.

The idea was to shout about how fantastic British agriculture is and encourage the public to think more about where their food comes from and how it is produced.

“Almost all of the issues facing the industry at the moment relate back to public understanding,” says Luke.

“The university is the best in the UK for agriculture, but I didn’t feel they were doing enough to promote the industry to whole student populations.

“I spent the whole of last year working on the concept, applying to the Student Union to get its support.”

This was no easy task, given a historically fractious relationship with the Student Union after the ag society was disbanded.

The day took over the campus, capturing the minds of the thousands of students milling around and going some way to healing the difficult relationship between the society and the union.

Away from life on campus, Luke has always been keen to gain practical farm experience on other farms before he returns home. He knows how to get the most out of working for other farmers.

“At harvest, I would actively choose to do different jobs rather than just corn carting all the time,” he says.

“For example, I took the opportunity to run the grain dryer to gain more experience and develop other skills and focus on my personal development.”

While a work placement was not an essential part of this degree course, Luke had always intended to get a year of working in the industry under his belt to help him land a job after graduating.

His placement with agronomy advice group Frontier saw him make the most of opportunities on the precision farming side of the business, supporting farm traders and assisting in trials work.

“My initial development of a new grain sampling system using barcodes was probably my biggest impact on the business,” he says.

Luke’s placement with Frontier proved a good decision – it helped him bag a full-time role as a trainee farm trader straight after leaving university.

He is now set on building a career and strong working relationships in this sector, with a view to returning to the family farm one day to take the reins.

“Luke is passionate about arable farming and is pursuing opportunities beyond the gates of his family’s farm to build his own skills and experience. He is keen to promote British farming.” 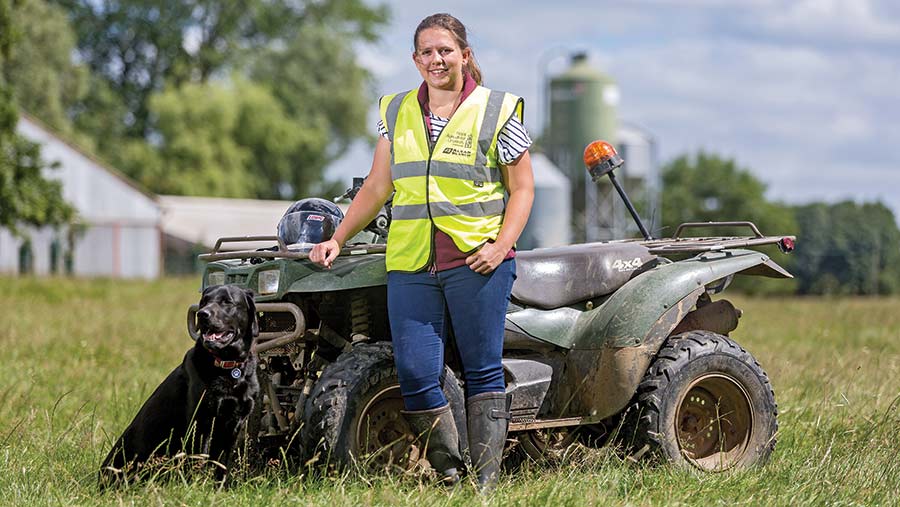 While not from a farming family, 21-year-old Alex has been dead set on getting into farming for as long as she can recall. She showed her willingness in her teenage years, helping out on a local mixed livestock smallholding, which fostered her love of farming.

Fast forward to today and she recently graduated with a first-class degree at the Royal Agricultural University (RAU), where she was recognised as a stand-out student.

Currently working on a dairy farm in New Zealand, Alex has bundles of enthusiasm for the future, with ambitions to become a dairy farm manager or get into milking goats. She also has plans to tackle agriculture’s poor health and safety record.

Studying straight agriculture at university, Alex says her favourite element of her degree course was a module focused on entrepreneurship.

“It looked at farm business development – other ways that farms can make money through diversification and business planning,” she says.

As a student ambassador, she loved promoting the benefits of studying agriculture to young people.

Just as the challenge of having no prior knowledge or experience of farming didn’t stop her from starting out in the industry, Alex has not allowed her severe dyslexia to stunt her impressive progress.

She dictates to her computer and uses other technologies for tasks such as writing her dissertation, which investigated the issues that will face UK farmers after Brexit and opportunities for greater collaboration in the future.

Her experiences of working on dairy farms in New Zealand feeds into this piece of work.

“In New Zealand there is a lot of focus on the business. In the UK we are very individualistic, but there are many benefits of co-operation and collaboration that would raise our productivity,” she says.

During her studies Alex worked part-time on a dairy livestock farm in Wiltshire with about 1,500 head of livestock, including an organic Jersey cross dairy herd. She also has experience of working with sheep and goats.

She embarked on a five-month trip to New Zealand last year as part of her course placement.

“It included sightseeing and farm work experience on a dairy goat farm on the North Island and later a cattle dairy farm on the South Island. This was an amazing experience. It would have been easier and cheaper to stay in the UK for my placement, but I wanted a challenge and to stretch myself,” she says.

One issue that she feels strongly about is health and safety. She has developed a prototype smartphone app to help with staff management and health and safety, and aims to secure funding to develop it.

“Poor health and safety in agriculture is a deep-rooted problem that needs a solution,” she says. “This app would help to protect staff and visitors by changing attitudes towards health and safety and promoting best practice.”

Once she is back from working abroad next May, Alex will set her sights on getting into farm management, although her ultimate aim is to have her own farming business.

“This is an industry that is exciting and open to those not from farming backgrounds. I like the quick response to actions in dairy and I’m good at reading people, so my short-term goal is to become a dairy farm manager. I would also love to get into milking goats because this is a growing market in the UK,” she says.

“Alex is somebody who turns challenges into opportunities. She is a real grafter, is confident and is selflessly working to improve British agriculture.” 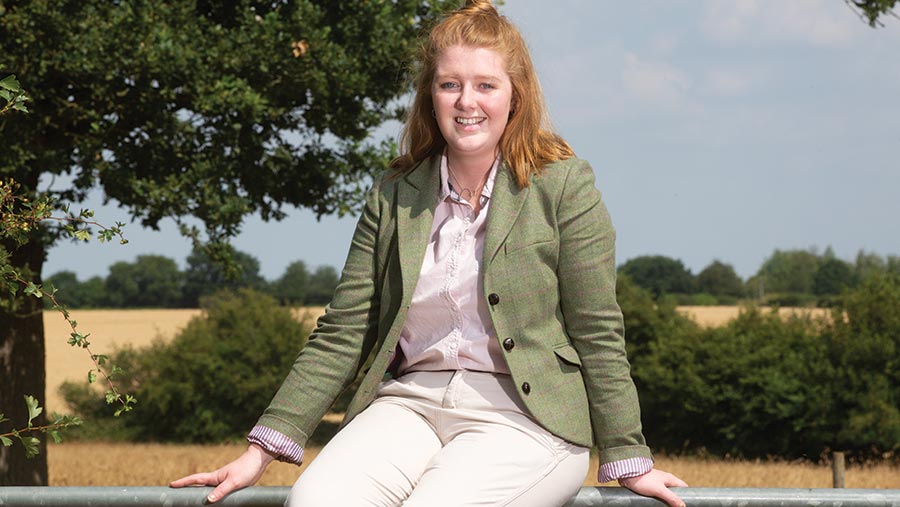 Emily isn’t somebody who does things by halves. Her boundless enthusiasm and open-mindedness make her one of Britain’s brightest young people in agriculture.

Growing up in north Wales, her childhood home backs onto fields, with the resident sheep often breaking into her garden. This was an early experience of agriculture and Emily knew it wouldn’t be her last.

She has never let her non-farming background act as a disadvantage to her progression.

“It was the scientific advances and the opportunity to be a part of something bigger that cemented my interest in farming,” says 23-year-old Emily. “With constant changes and advances in the world of agriculture, I knew it would be an exciting, dynamic degree to study.”

She’s big on encouraging others to get into this world too, taking time to visit her old secondary school each year to get students excited about a career in farming.

Emily says her proudest achievement while at Harper Adams University was being awarded a British Poultry Council scholarship in her second year, which included a year’s placement with poultry processor Faccenda Foods.

A keen blogger, Emily decided to take things to the next level by launching her own magazine at the start of this year to celebrate the lives of those working in agriculture.

The thought of juggling the pressures of producing a free quarterly publication with the intense workload of final year studies would make most students wince, but a blend of good time management, late nights and determination made it work. She brands it her biggest success and hopes her readers learn something from the interviewees.

Emily’s first taste of life on the farm was TB testing on a work experience placement with a local vet.

“My mum had wanted me to be a vet, so for me the biggest challenge was proving there would be career prospects for me once I graduated,” she says.

“Mum was very much of the opinion that farming was restricted to people with farms, and it took me a while to get her to understand that agriculture is about so much more than just farming.”

Despite her lack of experience, she got a job on a dairy farm at the age of 17 and progressed to the parlour, milking twice a day at weekends.

“My placement year was probably the highlight of my time at Harper Adams. I was able to take myself out of my comfort zone and learn about something completely new for a whole year,” she says.

On the back of her year in industry she has been offered a graduate role at poultry processor Avara Foods.

In five years she wants to be in a management position at the company, either working as a farm or area manager.

“I would like to work within the poultry industry for a while, but my end goal is to make the switch to agricultural journalism full time,” she says.

“Emily is committed to making agriculture more accessible to a non-farming audience. She has shown herself to be versatile and adaptable and is totally dedicated without compromise.”

“Kubota are proud to sponsor the 2018 Farmers Weekly Ag Student of the year award as it recognises the students who are taking up these challenges and who will bring these key skills and attributes into our industry in the near future.”