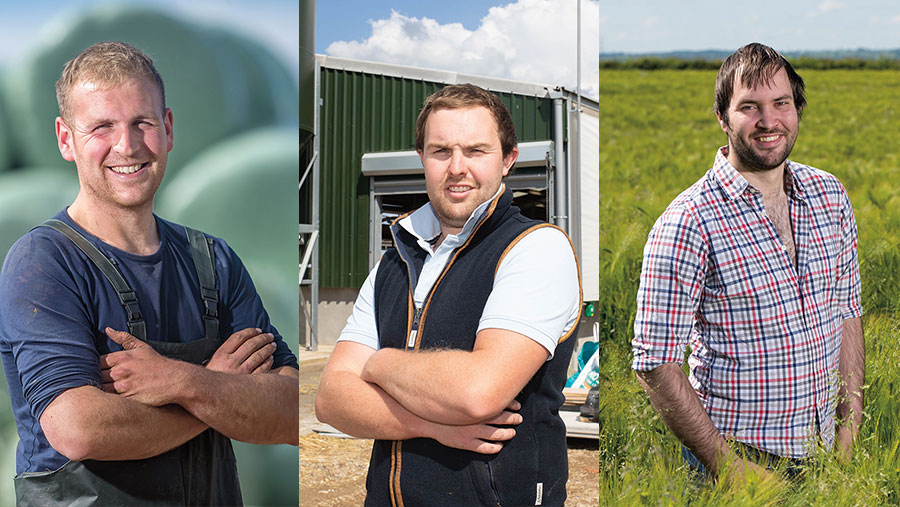 Drive, vision and ambition are on show from this year’s three finalists, who aren’t afraid to stand out from the crowd and take a risk.

Young farmers are the future of the sector and these applicants clearly have strong business acumen and a passion for agriculture.

Though split across the UK and across dairy, sheep, pigs and arable, they are connected by hard work, determination and openness to opportunity.

Taking that first step, whether it be into farming, a new sector or after a personal tragedy, is the hardest part for anyone, but these farmers have continued to stride out and succeed. 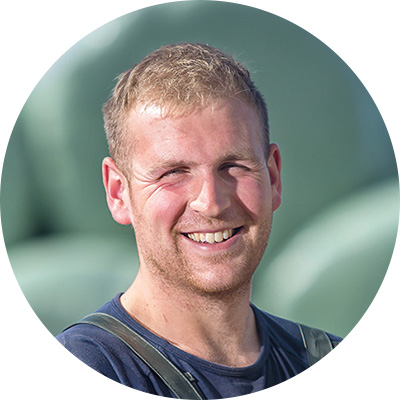 He started his farming business by lambing 50 ewes in a 60x30ft polytunnel at the bottom of his parents’ garden the year after leaving Reaseheath College, building up to a flock of 470 ewes that were turned out on 40ha of rented ground.

Since moving to the council dairy farm in January 2018 at 21, Sam has reduced his flock to 250 in order to build up his herd and is currently milking 140 Holstein and Jersey cows.

Getting started
“This was the first tenancy I applied for and I got a lot of negativity towards me about it, saying I’d never get it,” says Sam.

About 105 applications were sent to the council and when shortlisted to five, Sam found he was the youngest by six years. Following an interview, he received a phone call to say he was successful and his business plan was excellent.

“I knew because of the farm buildings that it had to be a flying herd and I must have come across quite passionate,” he says.

“I think it helped that I was bringing ground and a set-up business with me.”

Sam went the extra mile to back up his application with letters of support from HSBC, Muller and Dunbia, as well as accounts and a five-year business plan.

Current business
Sam has invested in improving the tenanted farm by modernising the sheds, doubling the capacity of the parlour, and adding a 4,500-litre tank and 14t-capacity silo.

He does his own AI and the majority of foot trimming, and works with an independent nutritionist for his cows. Fortnightly fertility vet visits “pay for themselves”.

Being part of Muller’s three-year Next Generation programme allows Sam to benchmark his business among his peers and learn from regular farm visits.

His cost of production is the lowest of the Muller group members. This is aided by working alone, apart from a relief milker two afternoons a week, and reinvesting all his profits bar living costs in the business.

His Texel and Suffolk cross Mules achieved a lambing percentage of 207% this year with good spring weather helping reduce the mortality rate. Planning the lambing period to begin mid-April when the cattle would be out decreased the pressure.

“I said I would never creep lambs born after April but this year everything is getting it as a trial,” says Sam.

“Lambs get fit faster and get gone and that money is put back into store lambs.”

Once a month, Sam welcomes on farm a group of teenage students from a school specialising in behavioural issues to spend a few hours learning about food and its production.

Going forward
Next year Sam plans to increase his herd to 180 cows and reduce his breeding ewes.

He hopes expanding will prove more profitable and encourage him to take on a staff member, allowing Sam to spend more time focusing on the business as a whole, rather than the day-to-day labour.

A key part of this will be learning and improving staff management skills.

“I’ve always had 1,000 cows in my head since I was a child but now I don’t know, your goalposts change,” says Sam.

“The problem of going all into cows is the lack of shed space here. To expand the way I want, I’ll be looking to move from this site when I’m about seven years into the tenancy.”

Winning his first farm tender at 21 years old with significant competition is an outstanding achievement. Sam is extremely business-minded, hard-working and ambitious, and understands the importance of continuing to improve his knowledge. 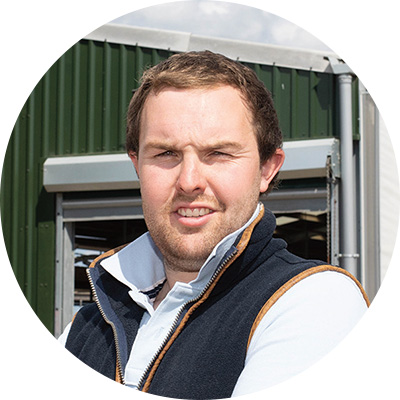 Cranley Hall, Suffolk
Sixth-generation farmer Alex Saunders grew up on the family pig farm and went on to work there after leaving school at 16.

Following six months working in New Zealand when he was 18, Alex returned home and tried to diversify with cattle, but soon realised it wouldn’t be simple to make it pay.

In 2017 he made the decision to build his own pig shed and is now fattening batches of 1,000 pigs for BQP, with a second shed on the horizon.

Getting started
“I wanted to do it off my own back, expand, make my own decisions and stand on my own two feet,” says Alex.

He worked with his accountant on a business plan, secured a loan from the bank, and received planning permission, with the help of a consultant.

Within a few months the shed was built and filled with pigs. Just 16 months later, the plans were in place for a second shed, which is due to be completed mid-July.

Current business
The pigs arrive at four weeks old and are on the farm for about 15 weeks before going to slaughter at a target deadweight of 75-85kg.

Now on his fourth batch of pigs, Alex takes care of the animals around his full-time work with straw merchant Eric Chapman. His father helps with the pigs while Alex is out during the day.

“There’s no way I could have done this without my parents,” says Alex. “We all chip in and help each other.”

Once all the pigs are gone, Alex thoroughly cleans the sheds and receives a new batch within a few days, ready to go through the cycle again.

He adapted the pig shed to have lower external walls, reduced from 2m to 1.2m, to make it less stuffy and help air enter, which has made the pigs more comfortable. Above this are automatic Galebreakers with wind direction and temperature sensors.

Alex monitors the animals’ daily water and food intake, while administering any necessary medication through the water. The system has troughs underneath to avoid wastage.

“We have a lot of people come here to see what we have done,” says Alex. “BQP praises us for doing things differently and say this is how it wants things done.”

Going forward
Alex believes that his biggest challenge is tackling tail biting within his pig batches, saying it is a real concern and difficult to watch when the animals are suffering.

“We love our animals and we do this job because we love it,” he says. “The public do not understand that and I would welcome them visiting our farm and learning more about it, because it’s important for them to know.”

Looking ahead, Alex is keeping his options open, with another 1,000 pigs due to fill his second shed this summer, along with the possibility of converting existing farm buildings or putting up more sheds for housing pigs.

He has bought some Boer goats, aiming to sell them for meat, and is also considering getting back into cattle.

Alex’s end goal is to use the capital from his stock to invest in machinery and create his own contracting business.

Alex is extremely hard working and has set up a great enterprise alongside a full-time job off farm, which is really admirable. He is clearly focused, committed and driven to improve, and is running a profitable business. 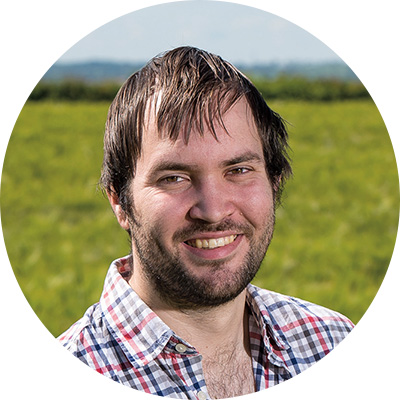 Druminard Farm, Cookstown, Northern Ireland
Jonathan Sloss’s family have farmed at Druminard since 1805 and he has followed in their footsteps since attending the College of Agriculture, Food and Rural Enterprise.

He was working on the family farm when his father died in a slurry accident in 2016. The 140 cows were dispersed while Jonathan had a break from daily farming.

In 2018, realising he missed the cattle, Jonathan took over ownership of the business from his mother and started to rebuild.

“I’m very picky about stock, I know what I want,” says Jonathan. “I’m very happy with my decision to get the cows back, it’s the best thing I have ever done.”

He has achieved a higher conception rate by working with Cogent Genetics, finding it more efficient and safer than using a stock bull, and also works closely with a nutritionist and agronomist.

The cattle are grazed unless the weather is too poor and produce 8,500 litres/cow, though Jonathan would like to increase this to 9,500-10,000 litres.

His cost of production is 24p/litre and he’s currently receiving 26.5p/litre.

On the rented land, Jonathan generally grows winter barley and winter wheat on rotation, though this year he put in maize as a forage crop for the dairy herd.

About 77ha are in grass, which is reseeded every seven years. Any silage he doesn’t use is sold on.

Apart from combining, Jonathan does all the arable work himself, assisted by full-time worker Spencer Downey. He also goes contracting for eight farms each year.

He has added solar panels to the roof of the dairy, an automatic calf feeder and an automatic scraper to improve efficiency.

“If you can get your costs down, that’s a good thing,” says Jonathan. “I’m always looking at ways I can farm more efficiently.”

He plans to improve and modernise the farm buildings, ensuring there is space for separating animals and including head-locking gates, as well as covering the slurry lagoon.

He approached video production company FarmFlix to work with them on their online series and the one where he shares the story of his father’s death to raise awareness is now their most viewed video.

“It’s my burden to carry,” says Jonathan. “My dream is to find a way of changing public perception of farming. I don’t think there’s enough done with health and safety and I want to find the vehicle for doing that.”

Jonathan holds a popular open farm charity weekend the week after the anniversary of his father’s death and would also like to get involved with the official Open Farm Weekend event in the future.

Going forward
Jonathan is currently in the process of having a new calf shed built, to include igloos and straw pens, which he finds they do better on.

Within the cattle housing, he wants to add a two-step automatic foot bath for aiding foot health and a double crush with head locks for safety.

“My dad always wanted to get to 200 cows, so I want to get to that and then reassess,” he says.

Jonathan has overcome significant adversity to start rebuilding his farm and business and he should be hugely proud of what he has achieved already. Farming needs passionate advocates like him. 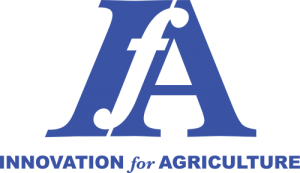 “If you want to move something forward, fill a room with young people, set them the challenge, and let them get on with it.

“This has never been truer than it is today in British agriculture.”