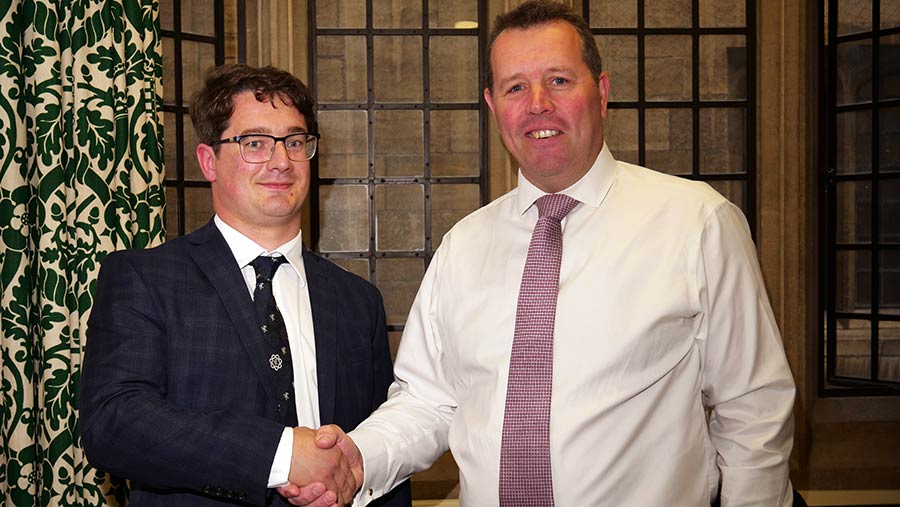 The work of Young Farmers’ clubs and their importance to rural communities has been hailed by the government’s chief whip in an exclusive interview ahead of National Young Farmers’ Week 2019.

Mark Spencer was the chairman of the National Federation of Young Farmers Clubs (NFYFC) in 1999, later embarking on a career in politics which today sees him in charge of making sure MPs vote in-line with the government’s wishes.

Following his appointment to the high-profile position of chief whip when Boris Johnson became prime minister in July, he agreed to an exclusive interview with NFYFC vice-chairman Dewi Parry from Clwyd Federation of Young Farmers’ Clubs.

See also: The drummer who traded life in The Kooks for life as a herd manager

Speaking in his office in the Houses of Parliament, Mr Spencer praised the role NFYFC had played in his personal and professional development, as well as the part YFC clubs play in the development of young people in rural areas today.

“They’re absolutely fundamental,” says Mr Spencer. “I think young people need somewhere to go, social activities to enjoy, the ability to network and socialise with each other.

“Young Farmers is the perfect platform to do that in a safe environment, in a structured way. It gets you out having fun, it gets you meeting people and socialising. That’s what life’s about, isn’t it?”

As chief whip, Mr Spencer describes his role as the “grease that makes parliament work”. His promotion comes at a critical time as the country looks set to leave the EU on 31 October.

He says that serving as NFYFC national chairman gave him valuable experience in dealing with difficult situations.

Twenty years ago, when Mr Spencer became NFYFC’s chairman, he had a demanding year in office as the federation faced a deficit of £170,000, widespread redundancies and the resignation of the chief executive.

Despite a turbulent time at the top, he says that being national chairman was “an amazing experience” and one that has prepared him for his time in government during one of the biggest challenges in the UK’s history.

“I look back at that time and, while it felt pretty traumatic in the moment, it actually was a great experience and something that has prepared me for the bumpy ride that the nation is feeling at this moment in time. It’s one of the best roles I’ve ever done in my life.”

Mr Spencer is a farmer and lives in the Sherwood constituency, near Nottingham. His farm, a former dairy unit, now grows potatoes and vegetables, and produces free-range eggs, beef and lamb, which are sold at a farm shop.

His children are involved in their local YFC and Mr Spencer says it was the federation that inspired his political career.

“I still think of myself as a farmer, I like to think that I’ve still got a little bit of farming, although I don’t get a lot of time to do it, but I think Young Farmers pulled me into politics slowly.

“You sort of get drawn into young people’s issues, whether that is housing, rural transport, the issues around access into agriculture, succession planning, so you find yourself moving from thinking about rugby and socialising and drawn into those small ‘p’ political issues,” he says.

Mr Spencer shared a message of support for National Young Farmers’ Week, which takes place from 30 September to 4 October, urging future chairmen to “make sure you leave YFC there for future generations”.