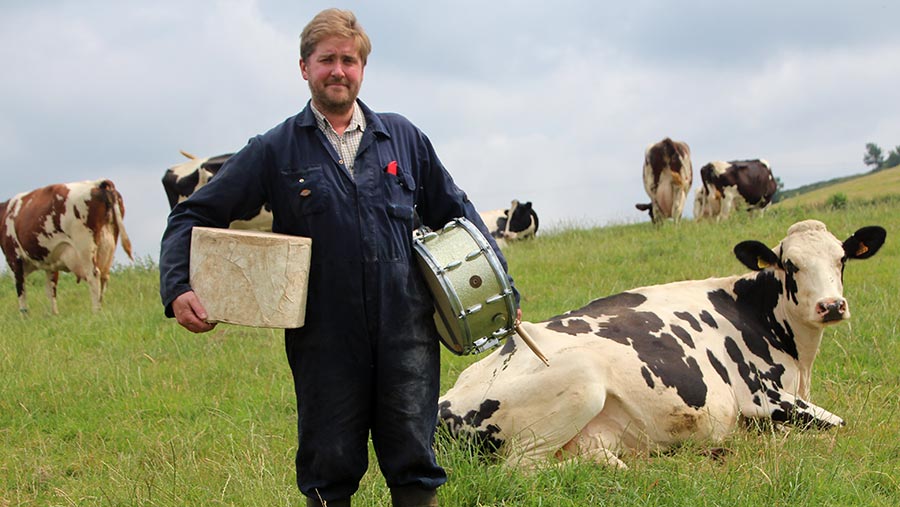 “I get up now at the time I used to go to bed,” laughs Nick Millard.

The herd manager is reflecting on his time as a drummer, forming a band with two friends while still at school and later playing with a host of others, including the renowned indie-rock group The Kooks.

Nick, however, had been “obsessed” with agriculture since he was a child, even though his parents didn’t farm. “I milked my first cow at the age of nine and was in heaven,” he says.

“When I was a teenager, I was desperate to pursue it as a career, but everyone discouraged me, saying it was impossible to get in to and a mug’s game.”

He is now 38 and very much following his dream, working at Westcombe Dairy, an award-winning business making traditional Cheddar and other West Country cheeses using raw milk.

The location at Milton Clevedon in Somerset is one rich in history as Edith Cannon – the woman who whose 1890s “recipe” helped define the process of making modern farmhouse Cheddar – lived here. “We really are at the centre of the Cheddarverse,” laughs Nick.

He began the job last year after five years as herdsman at Hafod cheese, Patrick and Becky Holden’s organic farm in Ceredigion.

Before that, studied International Agriculture at the University of Greenwich’s land-based college at Hadlow in Kent.

Nick describes his degree course as a “three-year voyage of discovery” and, during that time, he also won the Farmers Club’s Pinnacle Business Management Gold Award for his business plan to add value through cheese to the Buckinghamshire farm where he was relief milking.

“When I’d been a musician living in London, I’d been volunteering at a community farm in Greenwich and as a result I did a two-day course at Hadlow,” he says.

“That was the first time I’d been in a classroom since I was 18 and I loved every minute of it. I thought: Wouldn’t it be amazing to be in this classroom learning about farming all the time.”

While his journey into agriculture was the result of a lot of planning, his musical career happened by accident.

“Three of us started a band called Crackout and we got a publishing contact when we were doing A-levels,” he recalls. “After we left school, we signed with Virgin Records. We did a couple of albums and lots of touring.

“It was extraordinarily exciting. It felt like the world was at our feet and that anything was possible.

“People used to describe us as ‘punk pop’ but, as three middle-class boys from the Home Counties, I don’t think we were very ‘punk’ in the true sense of the word.”

After Crackout amicably went their separate ways, Nick spent much of the next decade working on different projects, recording and touring – the highest-profile spell being eight months with The Kooks in 2008.

“I got a call on a Friday afternoon telling me they’d just started a world tour, but their drummer had hurt his shoulder. The following morning I was on a flight from Heathrow to America frantically learning their songs. I only knew two of them!

“The next day their drummer flew home and I was in the hotseat. Even the smallest gigs were to 1,500 people. The biggest were about 6,000.”

He went on to play festivals around the world with the band, including one in Mexico City to an audience of about 150,000, and appeared on TV shows including The Tonight Show with Jay Leno and the MTV Music Awards.

“We really were living the dream – flying first class and staying in amazing hotels. It was an incredible experience but, at the end of it, nothing had really changed. 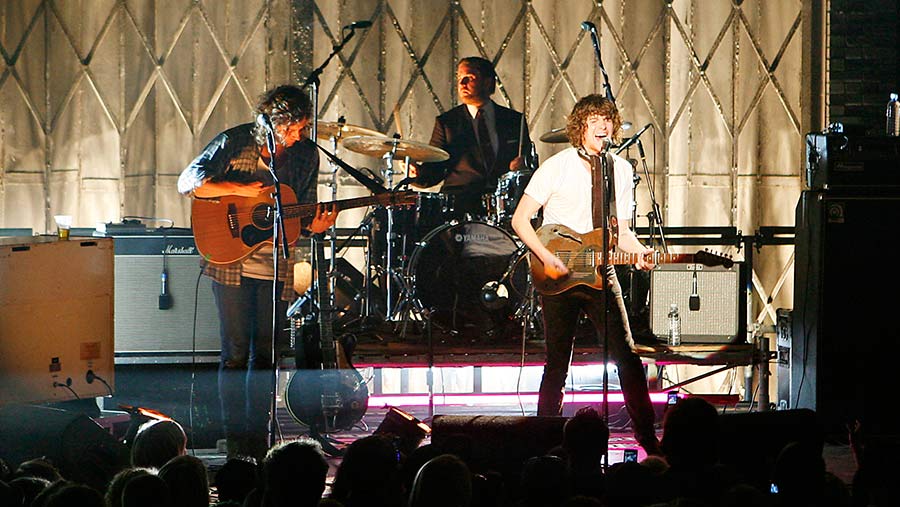 “When you’re a musician, you’re either rushed off your feet and earning money or you’re at home, waiting for the phone to ring. I was very conscious I didn’t want to be still doing this when I was 30.”

It was during this time that Nick’s love of food was really cultivated. “When you’re touring, you spend huge amount of time twiddling your thumbs, so there is a real culture in bands and road crews of researching good restaurants and eating out to break up the mundanity.

“This fuelled my interest in fine food and the farming that produces the raw ingredients. They’re two sides of the same coin – you certainly can’t make great cheese without great milk.”

Part of the key to producing great milk is giving the cows a really varied diet – and this means moving away from such a strong reliance on ryegrasses and maize, he believes.

“We need more botanically diverse pastures and cows that can graze them. I recently went on a study trip to France and saw cows being strip-grazed through meadows with 70 different varieties of wildflowers. That’s how to make milk for cheese!”

At Westcombe, Nick says the plan is to move away from Holstein Friesian breeding in the herd he manages, ultimately towards a 170-head herd, ideally mainly of Shorthorns.

“We’re making a traditional, clothbound raw-milk Cheddar so it makes sense to be milking the type of cows that Edith Cannon would have milked here 120 years ago,” he says.

“Modern manufacturing is all about producing cheese as quickly and as cheaply as possible, but there is a real renaissance happening in the farmhouse cheese sector.

“If you’re farming in an environmentally sensitive manner and exposing the cows to a wealth of biodiversity, you’re more likely to be able to make cheese that tastes, smells and looks really, really good – as long as you’ve got the talented cheesemakers, of course.

“Consumers want food that gets its flavour, not from added ingredients, but from the land – the French have a word, terroir, to describe how a specific spot influences the food and drink produced there.”

Never mind what they’re fed, though: given Nick’s musical talents, what does he play to the cows in the parlour?

“It’s pretty much only classical. It helps keep them calm, although the tractor drivers do occasionally mutter about my choices!”

You can keep up with Nick’s work on the farm by following him on Instagram.