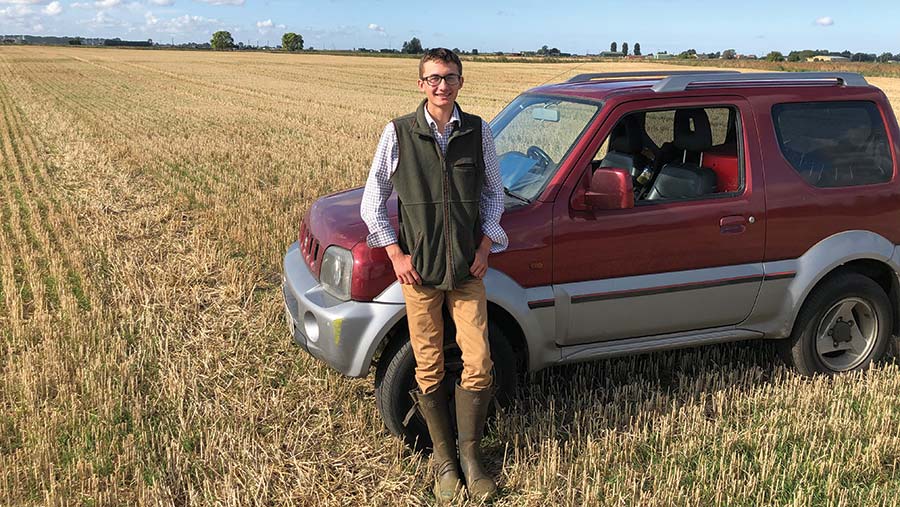 For ambitious young farmer Joe Rabicano, 2019 will be remembered as a pretty remarkable year.

From the stress of sitting his A-level exams and hope of successfully bidding for council farmland, to the elation of accepting a 42-acre tenancy and excitement of building his sheep farming enterprise.

Joe has been smitten with farming since an early age, despite not actually coming from a family of farmers – his parents are both teachers based near Wisbech in Cambridgeshire.

“People always told me I’ve was never going to be able to get a farm,” he says.

Undeterred, he approached a local farmer for some work experience at the age of 15.

“He was a County Council tenant farmer and that showed me that it was possible for me to get my own farm one day.”

Fast forward a year and Joe is working for a dairy farmer in Norfolk in return for a small tractor, which the young farmer is using to pick up contract work for other farmers mowing grass.

Depsite not having any formal qualification in agriculture, he’s soaked up an impressive amount of farming knowledge in a matter of years by working with other farmers and spending what little spare time he has left on research – something he confesses is something of an obsession.

At 17, he bought his first small flock of sheep, keeping them on rented pasture on a variety of agreements with different land owners, mostly for ground maintenance.

Joe’s successful bid for a Norfolk County Council farmland tenancy of his own came as a huge surprise.

As if swatting for and sitting mock A-level exams wasn’t enough to be concentrating on back in January this year, Joe contacted the council to ask if he could attend a training course for prospective council farm tenants.

“I didn’t really want to apply for a tenancy at this stage because I just assumed that my young age would count me out,” explains Joe.

He was told to come to the training and submit an application in any case, as it would be useful experience for the future.

Norfolk County Council had laid on a group of experienced, independent rural consultants to deliver a bespoke training course for would-be tenants, offering practical advice to help with business planning and the application process.

Joe was one of three course attendees to later be offered a council farm tenancy.

“The training was really useful and the council has been really encouraging,” he says.

“I learned so much about managing finance and staff, and the one-to-one advice they provided has helped me to look at my future business different angles.

“It has taught me how to put a business plan together, assess all the options and think about how to make a relatively small area of land work by maximising its profitability.”

Joe saw his application merely as a way of introducing himself to the council and land agents, laying the groundwork for future bids.

To his surprise, he was invited to an interview for the 42-acre holding.

The call offering him the tenancy came just hours after presenting his business plan to a panel, who scrutinised everything from his three-year cashflow projections to his cropping rotation of spring barley, sugar beet and grass leys.

Juggling a full-time job working on the Thurlow Estate to the south-east of Cambridge, and running his own small enterprise a good hour’s drive north near Downham Market, Joe’s opted to keep EasyCare sheep.

He’s planning on breeding his own replacements.

Having done his homework on a study tour to New Zealand, he knows that the breeding characteristics of these ewes will suit his low-input, grass-based system.

The flock will be outwintered and lamb out in the field.

The council land he’s taken on for the next five years is typical of the area – flat, open arable land with a pernicious blackgrass problem.

The hardiness of the New Zealand Romney breed means they should cope with the exposed conditions and rotational grazing will help to beat down the grassweed burden, he says.

He plans to use a contractor for much of the arable work, such as ploughing, spraying and combining, but has recently purchased a small Case tractor for other field work.

The young farmer managed to secure a £10,000 bank loan borrowed against everything that the business owns – including his sheep, tractor and Suzuki Jimny farm vehicle.

Joe successfully applied for a £2,200 grant from the Henry Plumb Foundation, which provides up to £3,000 in funding and mentoring to anyone with ambitions to become part of the future of agriculture (see “The Harry Plumb Foundation” below).

He is investing the cash in a mobile cattle handling system for use with his own cattle in the future and to do work for other farmers.

“There are a lot of arable farmers in the area with small beef suckler herds as a side business who could use my services,” says Joe.

Through the foundation, he has a highly experienced farming mentor to support him in the form of Euston Estate director and Farmers Weekly Farmer Focus writer Andrew Blenkiron.

Got a great idea for a business start-up? Maybe you’d like to do an internship? Always fancied going on an overseas exchange? Is your heart set on pursuing a course or attending an event?

If you’re aged between 18 and 35 and have an idea that could foster a career in the agricultural or food industry, there could be support available from the Henry Plumb Foundation.

Funding ranges from £500-£3,000 and every successful applicant is appointed an experienced farmer or businessperson as a mentor.

You don’t necessarily need a farming background, previous agricultural experience or academic qualifications – the foundation is looking for people who have the ambition to become part of the future of agriculture, a great idea and the drive to make their plans a reality.

He’s also looking to buy about a dozen Hereford-cross store cattle for next spring, but having never kept cattle before is wary of spreading himself too thin at such an early stage of his venture.

By the time he reaches the end of his first farmland tenancy, Joe hopes to be in the position to take on a 150-200-acre council farm with a house and outbuildings.

“It’s been really exciting to take on this tenancy with Norfolk County Council and I feel very privileged to be given such an amazing opportunity.

“I’ll be doing everything thing I can to make the most of it,” he says.

Joe Rabicano’s advice when applying for a council farm