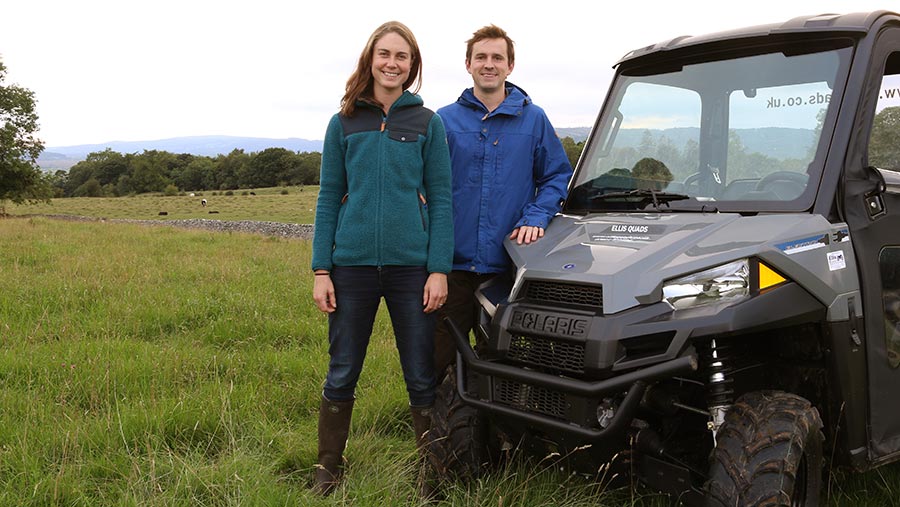 Leaping into agriculture, free of any preconceptions and with fresh ideas and bags of enthusiasm, Bekka and David Corrie-Close are a couple on a mission to farm differently.

Until last year, they had been farming without a farm on stunning hills on the south-eastern fringe of the Lake District National Park.

Building their business from scratch, they have been savvy in their approach to accessing land to farm – a cost that is one of the main challenges for anyone who wants to get into farming.

See also: How a new entrant built up a flock on short-term land tenures

Rather than compete for rented farmland – where the highest bidder nearly always wins – they spotted opportunities to approach landowners with ground in Countryside Stewardship schemes and agreed to graze their cattle – paying no rent or in some cases even being paid to farm the land.

As farmers without a base for years, they travelled within a 20-mile radius to check on and move their stock around less-productive land.

In May 2018, they landed a dream tenancy with the National Trust at Lane End Farm, near Kendal, after about five years of living in a yurt and crowdfunding to buy their native-breed cattle. 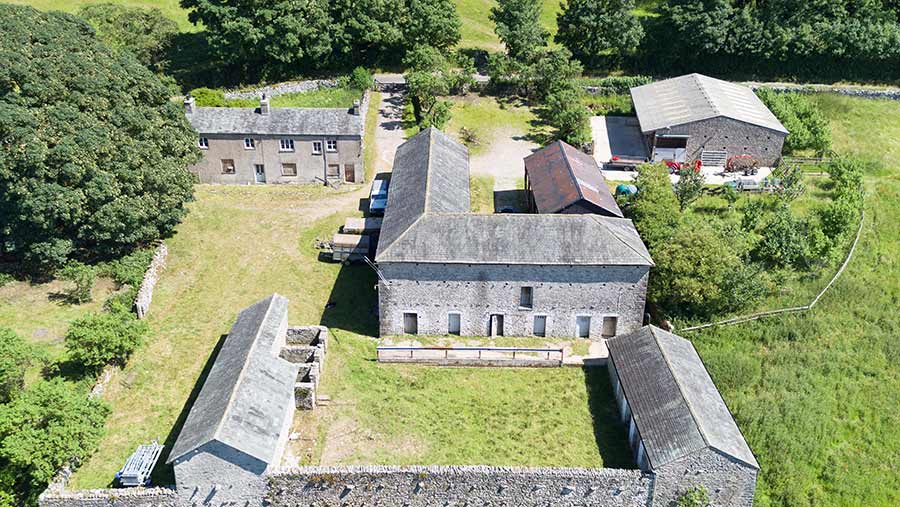 Bekka and David moved to Lane End Farm in August 2018

Today they are living in a caravan on the farm while the centuries-old farmhouse undergoes restoration work.

They run 110 head of cattle made up of many evocative native breeds, including Highlands, White Park and English Longhorns.

It’s little surprise then that they chose to brand themselves as The Horned Beef Company, selling boxed meat direct to the public.

These heritage breeds are about much more than visual gold for the farm business’s Instagram account – the cattle are renowned for being hardy and this is precisely what Bekka and David are looking for.

Variety is the spice of life! Wild foragering cattle munching on heather and bilberry tops. . Our cattle don’t just graze on grass – they forage. They can roam large areas and select what they want to eat -be it berries, young leaves or heather shoots. . Our cattle have the freedom to choose. To self-medicate. To roam. . #farmingwithnature #sustainableliving #nature #natureonthepage #naturephotography #ecology #naturelovers #foodlovers #freedom #roam #livewild #farming #conservation #regeneration #cumbria #wild #thehornedbeefcompany #beef #realfood

A post shared by The Horned Beef Company Ltd (@thehornedbeefcompany) on Mar 2, 2019 at 1:00pm PST

They outwinter their stock on about 400ha, but this land is far from prime pasture. The majority is steep and craggy fell land, dappled with bracken or taken up by forest, but the couple chose to work with this environment.

“We set out to farm hardy native breeds that can work in our farm system – extensive, not intensive, grass-fed, no cake,” explains Bekka, who has a degree in zoology.

The nature of their slow and low-input system means they are typically finishing animals at 30-36 months old, which is part of why they sell direct to the public rather than at market.

It’s clear that their style of conservation agriculture and openness toward the public helped them to bag their National Trust tenancy.

They aim to work up to what they call the “natural productive capacity” of this land, without the need for costly inputs.

“We’re not trying to be quirky with our choice of breeds. Long term we might go down the purebred route, with one or two rare breeds,” says David, whose background is in sales and marketing.

“Our livestock are three-and-a-half years old when slaughtered, so the beef is a different product. The grain of meat is tighter and the fat is yellow.” 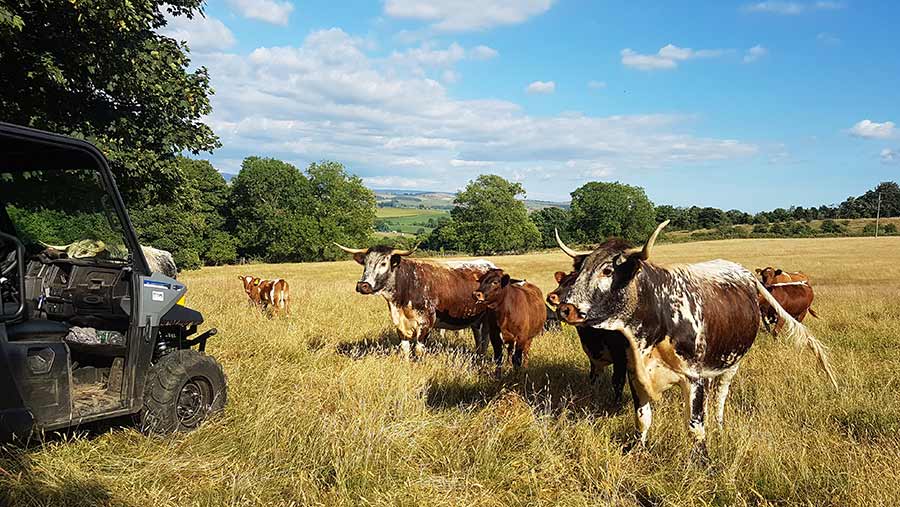 Cost-control is a big part of their business plan, David adds, explaining that they don’t buy stock at auction, always from farms in low-TB areas and make sure they are as affordable as possible.

For the first three years of their venture neither took a salary from the farm business. David worked for another farmer for several years to gain experience and Bekka still works part-time as an ecologist for the Rivers Trust.

“There’s a heck of a lot of legwork just to get to the first steps of the ladder,” says David. “It’s not for the faint-hearted and it has been really hard – especially the early days of farming without a proper farm.”

As new entrants they were unwilling to rack up significant debt to break into the sector and instead have worked hard to find another way of building up a farm business. They advise others in a similar position to do the same. 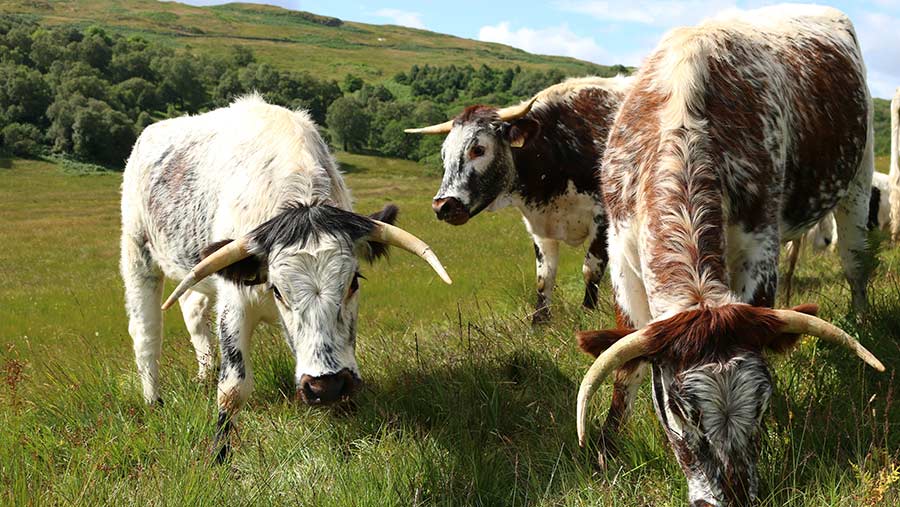 “We learned to not even try to be the highest bidder and compete for a farm tender. My advice would be to not expose yourself to massive financial burdens by taking out loans,” says David.

“Talk to people – we asked local investors for £1,000, which we promised to return in three years, and over that time we offered a return in the form of our beef rather than monthly repayments.”

In effect, their 20 investors were getting 4% on their money over the three-year period, with the interest paid in £40-worth of beef each year.

“Every decision we make is made seeing things differently and we don’t feel peer pressure to do what other neighbouring farmers are doing,” David adds.