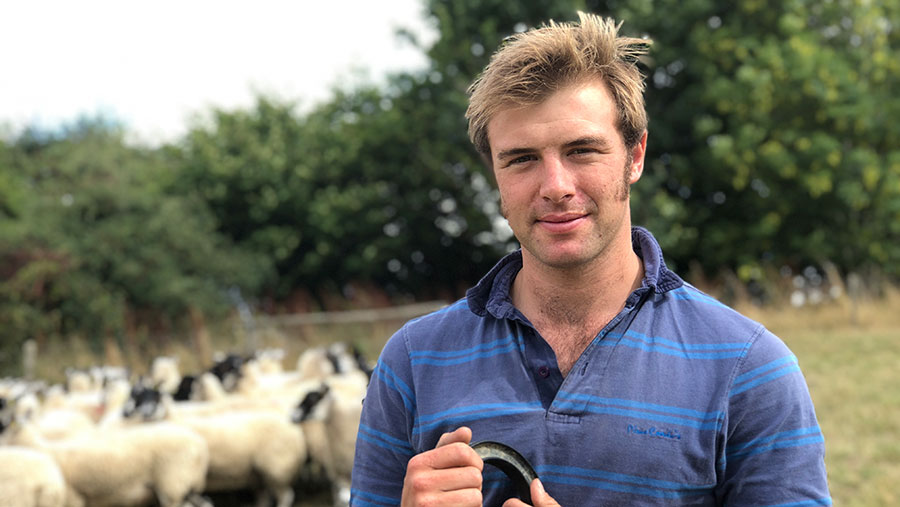 Sheep farming can be a tough enterprise anyway, but if you’re starting with no farm, no assets and limited experience, sheer determination is worth more than anything else.

Young farmer Rollo Deutsch has gone from starting with just two sheep at the tender age of nine to running more than 800-head, aged 23, without owning any land.

He juggles a number of tenancies and maintains a flexible approach, allowing him to make big changes at a moment’s notice. Forced to minimise costs, his tactics have allowed him to make the most of his situation.

See also: How a new entrant has set up his own dairy after 17 years of hard work

With no immediate farming background, Mr Deutsch’s love of farming stems from visiting his uncle’s farm in Wiltshire as a child and helping farming neighbours when they needed it.

For his ninth birthday his grandmother bought him two pedigree Vendéen ewes. “This got me going and I built them up to 30 ewes by keeping ewe lambs back.”

By the time he was 20, Mr Deutsch approached the bank for a loan in order to expand, but due to his lack of assets they refused him outright.

Instead, two family friends agreed to set up two private loans of £5,000 each, but at a high interest rate, with the agreement to pay back the loans the following autumn.

Due to his success, both investors have continued to support him for the past three years as his business has grown.

After completing a level three diploma in agriculture at Hartpury College, Mr Deutsch started a degree course at Cirencester, but decided instead to focus on his sheep enterprise and shearing.

He was experienced at shearing, having attended a British Wool Board training day aged 15 and been part of a local shearing gang while at college.

“Now there are just two of us shearing and it has enabled me to buy more sheep and go further with my enterprise. Across the eight-week period each year, I can earn enough money to help pay the rent.”

He doesn’t want to stop shearing despite its time-consuming nature because he would need a further 200 to 300 sheep to make up for the lost income.

Mr Deutsch now has five tenancies, each on an 11-month contract, which have to be renewed annually.

The term means the land has to be left empty for one month. However, each contract runs from a different period, so he is never without enough land to keep his flock.

“It’s good because if I lost one landlord, then I’d still have somewhere to go, but I can’t make a five- or 10-year plan.”

Mr Deutsch has taken a trial and error approach to learning what works for him. He is now reaching a point where he knows how he wants his system to work but admits there’s always room to be flexible.

He gradually phased the Vendéen sheep out of his flock and now has Texel Mules, North Country Mules and Aberfield Cheviots. However, his breeding and selling policies have changed every year.

“My original plan was to have a closed flock, but it’s a long process.

“This year I have decided I’m going to buy North Country Mules as these will lamb outside, whereas the Texel Mule is not as easy to lamb outside, nor as prolific – and the Aberfields do not produce enough lambs.

“I always want a better sheep, it’s a addiction.”

He lambed 200 Aberfield cross and 450 Texel Mules last year, but to facilitate the transition to North Country Mules he will now buy-in replacements instead of rearing his own ewe lambs.

“I want the first cross rather than second-generation crosses as you experience more udder and feet issues with the second generation.”

The plan is to put all the North Country Mules to a Beltex cross Charollais sire to produce lambs to sell as stores or fatten.

Mr Deutsch’s multiple tenancies mean he has to take a flexible approach to sales, selling lambs fat or as stores either when the price is right or if his changing tenancies require him to have fewer hooves on the ground.

In the long run he hopes to be able to rent a tenanted farm, but currently his money goes into his sheep enterprise.

Mr Deutsch usually lambs outside, but this year he lambed the 450 Texel mule ewes in a rented shed – something he has decided never to do again.

“I lambed inside in March – to catch the earlier market. The lambing in the shed went really well. However, the lambs had only been outside for a week when the ‘Beast from the East’ arrived.”

The shed-born lambs did not cope anywhere near as well with the weather as those born outside, so Mr Deutsch has decided to only lamb outdoors in future.

He rotationally grazes in winter and tries to do so in spring, although he finds it hard due to being so busy with shearing alongside the rapid grass growth at this time of year.

Generally, he feeds hay over the winter that he buys standing, alongside fodder beet, some nuts and a mineral lick.

Having qualified as an NSA young shepherd in 2017, Mr Deutsch applied for the NSA Ambassador programme, as he thought it would be a valuable learning experience away from his own enterprise. He has learned a lot from the farms he’s visited.

“All the time I was thinking of how I could apply things at home – you pick up little tips on how to do things.”

It’s taught him a lot about different sheep breeds and introduced him to people he will be dealing with throughout his sheep farming career.

“I have thought at times that I could get a shepherding job with less responsibility, but talking to the other ambassadors, some of whom don‘t have their own flocks, makes me not take what I have for granted.”