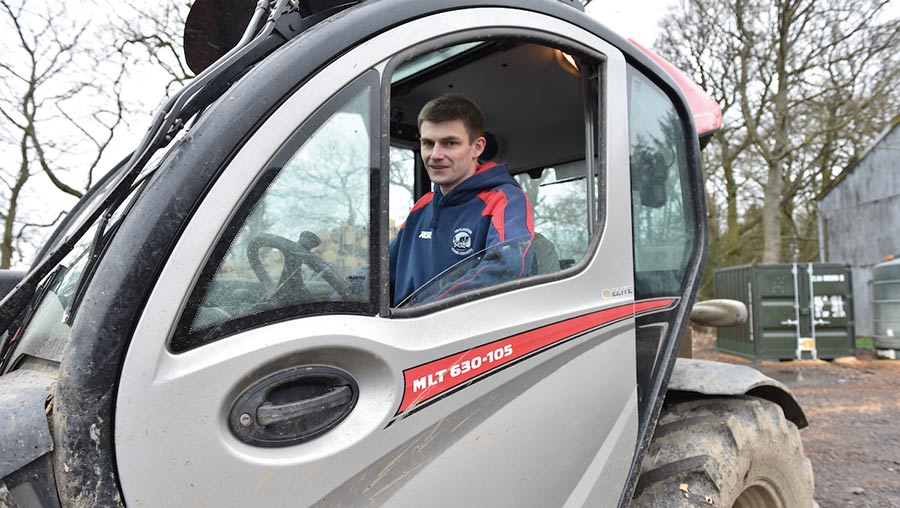 As the National Federation of Young Farmers’ Clubs celebrates its 90th anniversary, we catch up with chairman Ed Dungait and ask him about the attractions and challenges facing new entrants and young farmers.

Would you recommend a career in agriculture to a school or college leaver, and why?

Yes. It is such a diverse industry but that’s not always recognised or promoted.

There are options for almost any student to join the industry in a way that suits them.

After a recent NFU Next Generation meeting in Newcastle, we had a few drinks with three of the NFU graduate scheme employees.

They had all studied politics, economics or geography at university, but really cared about food security and sustainability.

They had decided to join our industry to make a difference and were enjoying their jobs.

It was really refreshing to see how much they cared about food supply despite not coming from a farming background, and there were job opportunities available for them to influence it.

The agricultural industry is huge – it’s not just farmers, and there is likely a job out there to suit most school or college leavers.

But there must be some downsides?

Of course, being a farmer is a tough, hard, dirty job requiring long hours and perseverance.

It can be a lonely job at times. We are so reliant on the weather, meaning 12 months of hard work can often be spoilt and that is totally out of our control, which can be hard to take.

Most farms are family businesses and while, this may give stability, it can create a lot of issues.

We’ve certainly found this at home and, although we all try hard to make things work, all the family would agree it can be a struggle and it takes its toll on us.

What are the biggest challenges facing new entrants and the next generation?

Huge capital costs. That’s why I don’t think new entrants should be so obsessed with getting their own tenancy.

It’s often unrealistic and is a huge risk for both the tenant and landlord. They should consider a range of options or business models for their future farming career.

For those who are in farming families already, the biggest challenge is often their own parents or grandparents; this can be particularly so for females.

Just in the past few months, I’ve heard from so many women who have been encouraged/pushed out of the farm business by their parents out of preference for their sons.

I didn’t think that would still be an issue today, but it clearly is.

If you had 60 seconds in a lift with the Defra secretary, what one policy would you ask him to change or introduce?

Encourage landowners to offer longer-term tenancies by giving tax incentives for them.

Currently, the tax system is much more favourable towards contract farming agreements.

These are much less secure for the farmers, so it discourages investment as they have no long-term security.

This is a big policy matter and goes beyond Defra to other government departments, but it could help the industry in the long term and result in far more sustainable business models.

What personal traits will characterise the successful farmer of the future?

How can young farmers improve their mental health?

Get off the farm as often as you can. Join your local YFC and get stuck in.

When I was 16, I suffered from obsessive compulsive disorder quite badly, which I found hard to cope with. I didn’t know what it was at the time and I hadn’t told anyone about it, but it was ruining my life most days.

Tritlington YFC weekly meetings were the only time I managed to relax and forget about it for a while.

One meeting stands out, for some reason. It was a Monday night at the pub.

I’d had a terrible few days mentally but I went along, played some pool, had a couple of pints and chatted to Mel Howie and others.

That was all it took to cheer me up and help me forget about the thoughts going round in my head for an evening.

Eventually I opened up about it and got professional help, but if it hadn’t been for YFC I would have seriously struggled to get through that time.

If you hadn’t become a farmer, what would you have done?

I wanted to be a vet, so I did a load of work experience but then decided it wasn’t for me.

I preferred physics and chemistry to biology, so then I fancied being a civil engineer, building bridges and roads.

My physics teacher was my Ucas referee and was determined I should do this, too, but after much debate with him I decided agriculture was where my heart lay.

I looked round Newcastle, Nottingham and Royal Agricultural University, which would all have been good.

But when I saw Harper Adams I knew that was the place for me. I had an incredible time there and would recommend it to anyone.

When I’m shovelling wet wheat out the dryer pit, I often wonder if I made the right career choice, but overall, I think I did.

Tell us something about yourself not many people know about you?

I got stuck in a rip tide in the Pacific at Bondi Beach, Australia, with six friends and we all had to be rescued by lifeguards. The sea is a treacherous place so be careful.

The NFYFC 90th Anniversary Summer Ball, held here in Northumberland on 11 June, was the first social event NFYFC has held for a few years. It was awesome.

We had six members in a Battle of the YFC DJs who’d travelled from all over the country – including Pembrokeshire, Suffolk, Glamorgan and Lincolnshire.

They absolutely smashed it and really got the atmosphere going all afternoon. Then The Rich Reeves Band and DJ Bulge had the place bouncing.

Give us three reasons to join a YFC

You’ll make friends that will stand by you forever, achieve things you never knew you wanted to, and have a cracking time in the process.