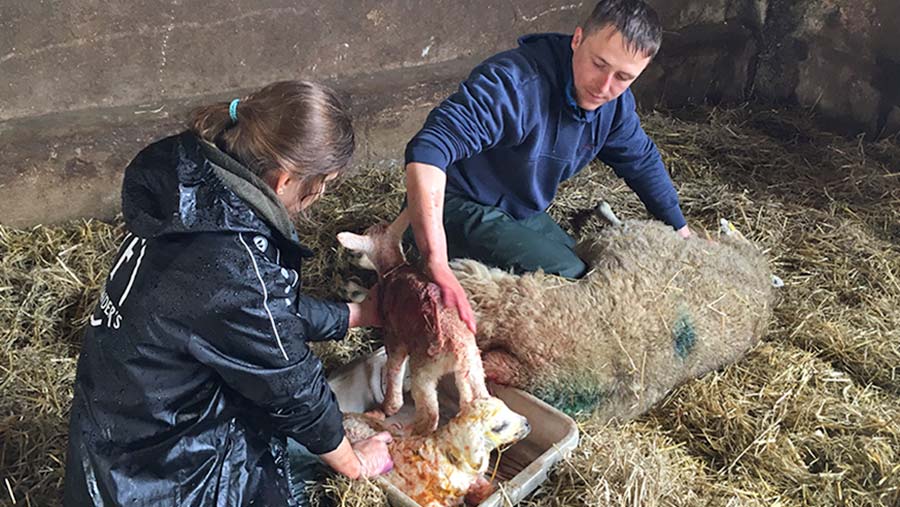 Lambing 2019 has been a relatively straightforward affair for Farmers Weekly’s reigning Young Farmer of the Year, Jacob Anthony – a welcome relief after tough and bitterly cold season last year.

The 26-year-old has been lambing just shy of 1,000 Lleyn cross Texel breeding ewes over a three-week period on his family’s 283ha farm a few miles north of Bridgend in South Wales.

We caught up with Jacob as the manic pressure of lambing eased in its final week. Watch the video below.

“We’ve been flat out the last few weeks, it’s been a bit hectic but it’s tailing off now and we’re coming out the other end,” says Jacob, who’s the fifth generation to farm at Cwm Risca Farm.

“It’s been pretty good this year, we’ve had the weather on our side for once which makes a nice change.

“This year we didn’t need to house any ewes until 10 days before we started lambing, rather than the three weeks before last year.”

He says lambing percentage is about 10% down on the 2018 season with more singles this time around and hardly any triplets at all.

He thinks the drop in number of lambs this spring could be partly linked to the dry weather last summer, where grass became desperately short.

The majority of his finished lamb will be sold through the Wales YFC scheme to Dunbia and Sainsbury’s, which offers a premium price and gives a bonus for hitting the correct carcass specification.