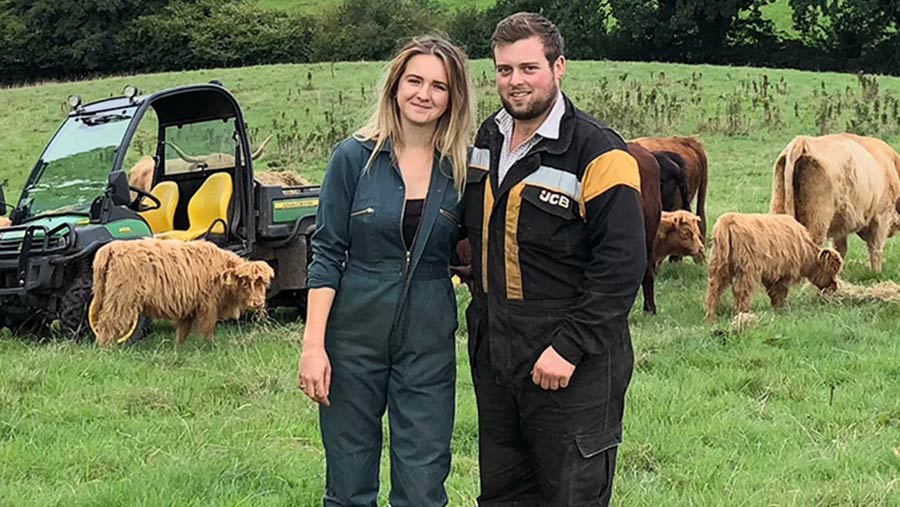 Nothing is more important to budding farming couple Amelia Millman and Jason Greenway than playing to their strengths as they establish their dream farm business, priding themselves on quality above all else.

This May they were ecstatic to be offered a 86-acre farm tenancy nestled in the delightful Devon countryside, some 10 miles north-east of Exeter.

They are supplying organic meat to a large office canteen in the city, as well as a prestigious pub just a few miles from their farm gate.

With about 40 Red Devon and Highland cattle grazing the pasture scattered around Clapp Mill Farm near Broadclyst and a small herd of pigs merrily turfing up a paddock a stone’s throw from the yard, Amelia and Jason are using their relatively small size to maximum advantage.

This grass-fed organic beef system isn’t exactly a recipe for fast-finishing animals, with bullocks typically taken to a local abattoir at around 32-36 months.

“Our ethos is all about native breeds, organic and local,” says 18-year-old farmer’s daughter Amelia. “Everything we do here is slow-growing, but that’s because we believe in quality produce.”

The couple are making the most of the flexibility that comes with a smaller-scale enterprise by farming a little less conventionally and seeking out niche markets.

They are continually running their Highland bull with the herd of pedigree Red Devon and Highland cows, which means they will be calving year-round.

“We do this so that we will be able to supply the market all year round with animals finishing at different times. It’s about doing what works for us,” explains Amelia, who has given up her part-time milking job at a local dairy so that she can spend all of her time and energy on her own enterprise. Jason works for a local farmer and spends his evenings and weekends devoted to this business.

See also: Loads more advice on getting started in farming

Crossing a hardy Highland with a stocky native beef breed is sure to raise a few eyebrows, but there is method to their unusual approach.

Slow-finishing Highland meat is lean, low in fat and cholesterol, while also managing to be richer in protein and heart-healthy omega-3 fatty acids than beef from other more conventional breeds. 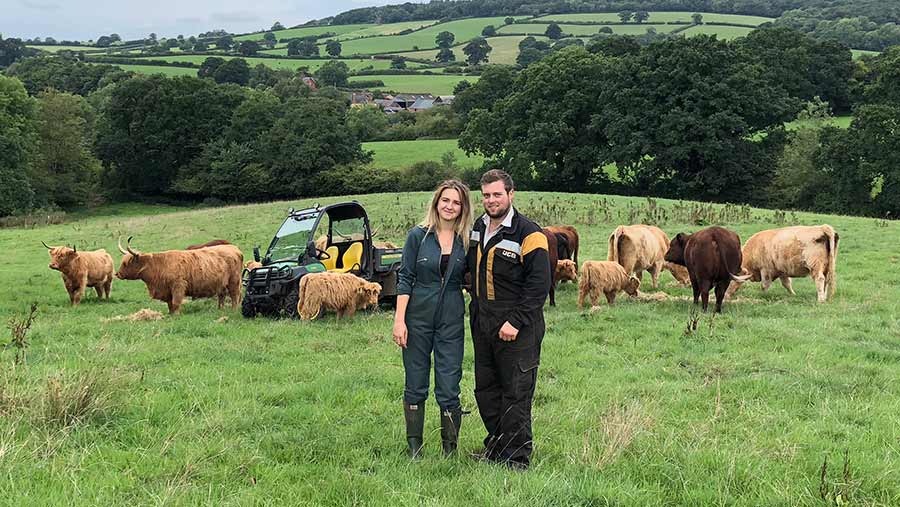 The pair admit that this is a bit of an experiment. They hope that by throwing the more commercially desirable qualities of the Red Devon into the mix, they will produce a beef animal that boasts the best of both breeds.

“Year-round calving is manageable because all our fields are local and we’re not on a massive scale,” adds 22-year-old Jason. “It will take time, but once we’re fully up and running, we hope to be sending a bullock to slaughter every couple of weeks.”

The meat is hung for at least four weeks and ends up feeding hungry workers at an office in nearby Exeter, which is run by the same family whom Amelia and Jason rent their farm from.

See also: The girl who ditched her marketing career to be a sheep farmer

It is also enjoyed by diners at the local Five Bells Inn in the neighbouring village of Clyst Hydon, and sold direct to customers as boxed beef. They say they have also had strong local customer interest in their pure-bred organic Highland beef.

The also pair run native breeds of pigs – Saddleback, Berkshire and Gloucester Old Spot – but there is one breed that breaks their rule of only keeping stock with a British background.

Their Hungarian-heritage Mangalitza sows and boar have an important role to play in the direction that Amelia and Jason want to take their fledgling business in. 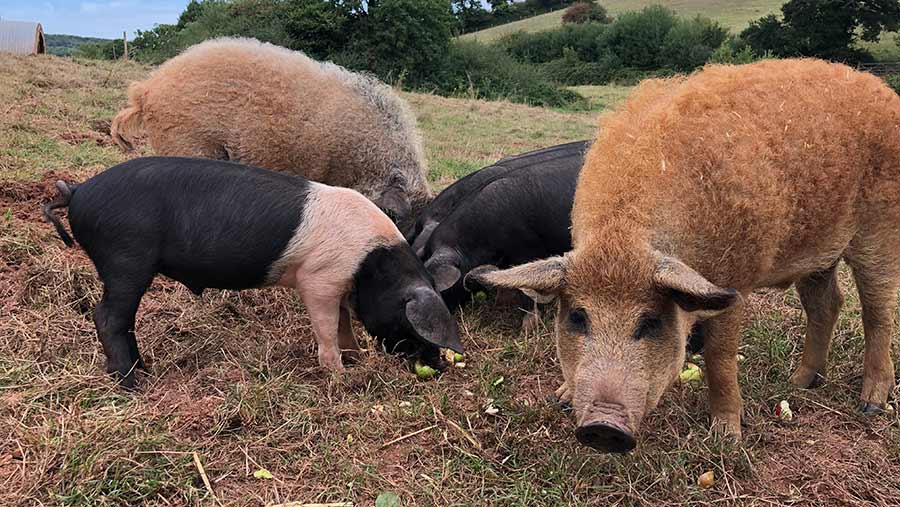 This breed doesn’t just stand out by virtue of it’s distinctly hairy, wild-boar-like appearance – it’s dubbed the “kobe beef of pork” and is highly sought after by top chefs in trendy eateries because of it’s dark, fat-marbled meat.

“It’s very fatty but that makes it great for charcuterie – dry-cured meats such as prosciutto,” explains Amelia.

Knowing that they can’t compete on scale of production, they are making the most of their small size to be able to hit niche markets, which pay a premium.

As with their beef enterprise, they plan to put their Mangalitza boar on their sows of traditional British breeds with the aim of producing a pig that has the body length of a Saddleback with the specialist meat properties of the rare Hungarian breed. These are slow-maturing animals fattened on a mostly grass-based diet.

Not ones to take it easy, the duo say they would like to take on more land in the future, increase their stock numbers and also have plans to start farming free-range organic chickens.

Asked how they managed to achieve so much as such a young age, Jason says there’s no substitute for honest hard graft and dedicated saving to get where they are today. 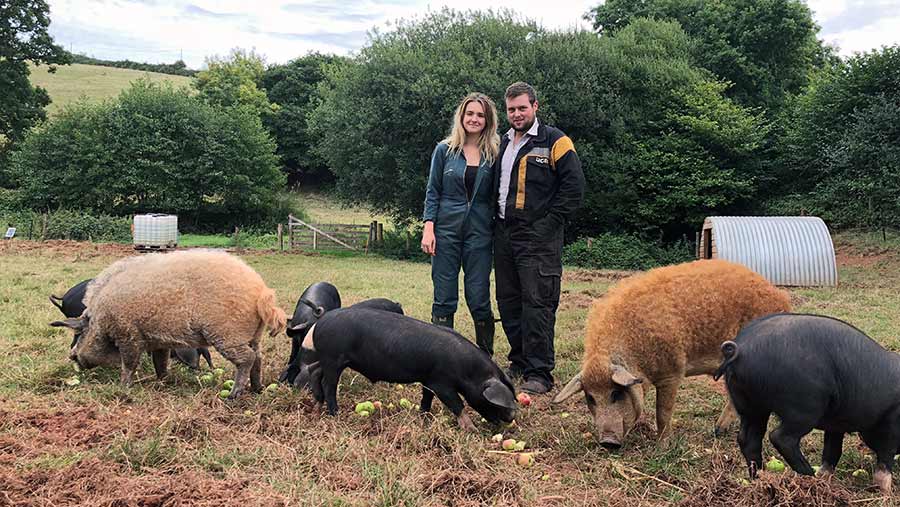 “I just worked hard, didn’t really go out that much and saved up to buy the animals that we have now. We know we are ambitious, but we’ll get there.”

Amelia adds that their leap into farming has grown surprisingly rapidly. They started out last Christmas by buying four Red Devon steers to finish and were amazed by the demand from local people who were asking to buy their beef boxes.

“They loved the fact this it was local and organic and they really wanted to support us as young farmers, which is so lovely,” she says.