Young farmers have taken part in a tractor run to object to the proposed closure of Newton Rigg College.

More than 80 tractors converged on the campus near Penrith last week with a clear message from Cumbria Young Farmers: “Protect our farming future, save Newton Rigg College”.

News that the college is set to close emerged in May, after an initial Further Education Commissioner review found the site – which forms part of the wider Askham Bryan portfolio of educational establishments – was not financially viable.

However, a second review is under way to try to find a new owner for the site.

The start points for the run through Cumbria were Broughton, Drigg and Longtown, with Newton Reigny the final destination.

Neil Hudson, MP for Penrith and The Border, said it was “humbling and heartening” to join the tractor run.

He welcomed the young farmers at the end and spoke to them about his work trying to secure a future for the college.

Mr Hudson said: “Huge thanks to everyone who made this special occasion possible. This is the next generation of farmers.

“They have shown loudly and clearly what this vital Cumbrian College means both to them and our UK farming future.

“We will keep working hard to try to save Newton Rigg, and the government-led Strategic Review, which I triggered, is now evaluating management bids coming forward and gives us the best chance of achieving that.”

A giant banner was unfurled on the back of a trailer which read “Protect our farming future, save Newton Rigg College”. 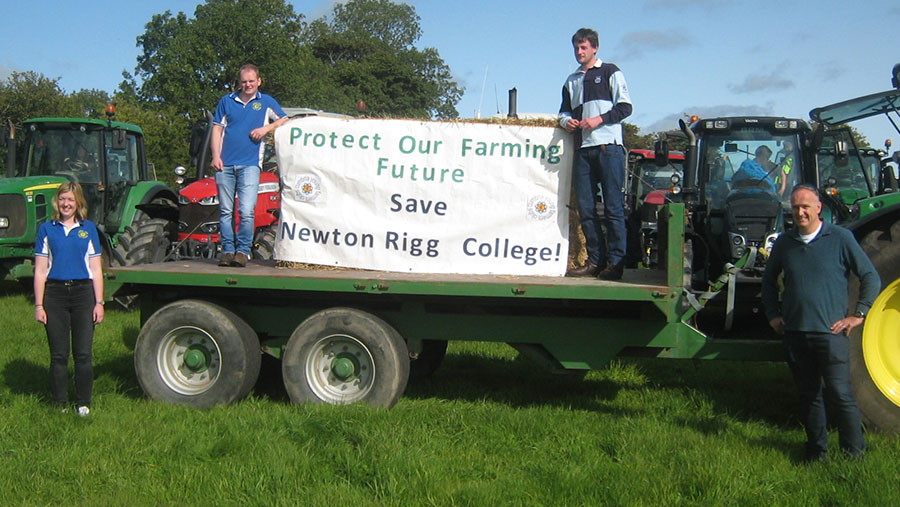 Cumbria YFC county president Judith Emmott said: “The tractor run is the Young Farmers’ way of showing everybody how much the college is valued.

“It is not just an agricultural college, it provides a variety of courses, giving young people amazing opportunities to further their education.

“It is where lifelong friendships are formed and it gives them the grounding and support that will set them up for life.”