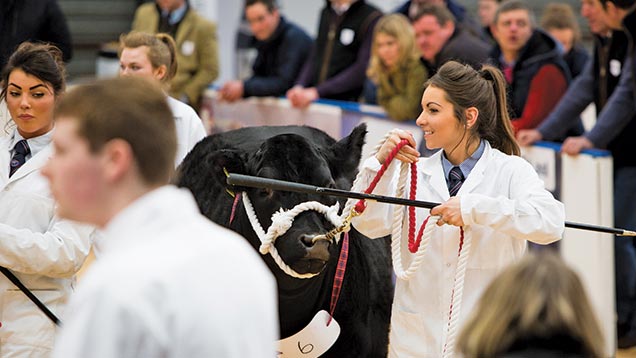 Stockmanship – the art of preparing and showing livestock – is enjoying a renaissance among a new generation of farmers. Sarah Todd reports.

Agricultural colleges, breed societies, show organisers and the Young Farmers’ Clubs have been at the forefront of encouraging a renewed interest in livestock showing.

That’s the view of farmer Bill Cowling, who has recently stepped down after 10 years as honorary show director of the Great Yorkshire Show.

“Over that decade, one of the most rewarding things has been the resurgence of interest in showing livestock,” says Bill.

A camera crew from legendary children’s television programme Blue Peter went behind the scenes at two family farms, watching children prepare their pigs and sheep for the three-day Yorkshire Show. Then, in true Blue Peter style, the presenters had a go in the actual show ring.

“One of the key lessons young exhibitors need to learn is that if you can’t do the losing you shouldn’t do the showing,” says Bill.

“They soon learn that it’s easy to stand at the ringside and say that theirs would have won. The real challenge is putting in the work and actually bringing them to the show. They are all in the same boat and soon learn that you win some and you lose some – a really valuable life lesson in itself.

“I love to watch the young handlers and see the camaraderie that develops among them. When a youngster turns to somebody who has won and offers a handshake, it gives you great heart in the future of agriculture.”

Bill is a regular, both as a supporter and judge, at the oldest college-run stockmanship competition in the country.

This year marked the 54th annual running of Bishop Burton College’s annual stockmanship contest. Preparations begin about six weeks prior to the competition, when students at the East Yorkshire college are allocated an animal. All bred and reared at the college, the animals then became the responsibility of the student. One of the main challenges is always getting the animals to walk on a halter.

Jeannette Dawson, principal and chief executive of the college, says: “I’m often out and about on campus early in the morning and late at night and it’s always heartening to see the extra hours some of these students put in.

“They work hard during the day and then there they are after-hours halter-training the animals and grooming them. There is no doubt that such dedication helps put them head-and-shoulders above the competition when it comes to entering the workplace.

“We have the most tremendous judges and sponsors involved. This competition is very professionally run and proves that the skills of stockmanship are very much alive and thriving.”

Lynsey Martin, president of the National Federation of Young Farmers’ Clubs, says she has been “bitten by the bug” since showing her first lamb at the age of two.

“Showing is a great chance to catch up with people that I don’t get to see the rest of the year,” she says.

“It’s also a great shop-window for mine or other people’s stock, especially for pedigree breeding stock. I grew up with going to shows being my holiday – and it still is now.

“It’s a great opportunity to network with other breeders and similarly minded people. At the best agricultural shows, it’s also a good chance to go and get a good look at the latest trends and advances in machinery and equipment.

“As for stockjudging, it’s really important to know what you are looking at, if you are going to breed stock in the future. Plus if you are going to sell or buy, you need to be able to assess the stock in front of you. Even though each person looks for something different, doing stockjudging through Young Farmers’ can give you an appreciation of different perspectives. You can then go away and decide what is important for you. It also teaches you the ability to justify your selection to other people when they question your choices.

“I also do stockjudging because I am extremely competitive and it’s a great opportunity for me to show off skills, such as public speaking, I have picked up on the way.”

This is the first year Jess Johnson has “done everything myself” when it comes to cattle showing.

Although she’s successfully competed at a very high level with her horses, nothing compares to the pride Jess felt when scooping third prize and the prestigious best home-bred award with her Belgium Blue-cross bullock at the 2015 Great Yorkshire Show.

“It was the most wonderful feeling; I was so proud,” enthuses Jess, who combines her work as a massage therapist with riding out other people’s horses and helping with the family beef herd.

“When I was younger and went to shows with my mum and dad I was only interested in watching the horses,” remembers Jess.

“But then, one year when I was about 15, my dad won champion at the Christmas fatstock market with a home-bred bullock. I thought it was brilliant and started to get interested in showing.

“I’ve had my grandad and my parents to ask advice from, but it’s meant a lot this year to do everything myself with this bullock Stilton Blue – we call him Ted at home.

“When I first started showing, there were definitely a lot fewer younger people doing it. But over the past couple of years there has been considerably more getting involved and I’ve made lots of new friends.

“I’m a very competitive person so set myself targets of who I want to beat. Showing is about much more than the animals – it’s about the overall picture you present. People probably don’t realise how much work goes on training the animals beforehand.”

Jess, whose family farm is JR Johnson & Son at Terrington, North Yorkshire and sells its cattle at Leyburn and Thirsk markets, says being a member of her local Young Farmers’ Club has also helped hone her skills.

“The stockjudging competitions young farmers’ runs help you learn what a judge will be looking for,” says Jess. “There’s definitely a lot more of a buzz among young people about showing at the moment. Next year I want to expand my show team with a cow and calf and travel further afield, to the likes of the Royal Highland and the Royal Welsh.

“The other thing I like about showing is that, from a business point of view, it promotes what good stock you have and the public likes to see that link between the animals and the meat that they eat. I just love it and am so excited about doing more next season.

The future for young stars

Putting youngsters on a wider platform was the aim behind National Young Stars, a new event launched at the Three Counties Showground at Malvern this spring.

It came in the wake of the Three Counties Show seeing a significant increase in entries in its young handler classes over the last few years.

This year’s inaugural event saw more than 100 young enthusiasts between the ages of eight and 24 showcase their skills in marketing and presentation, clipping, trimming and presentation, ring craft, auctioneering, butchering and their general knowledge of the industry.

Chairman Neil Lloyd says: “The aim all along has been to put young people at the forefront of a farming event and give them the profile and credit they deserve.”

Chrissie Long, one of the driving forces behind National Young Stars, added: “Stockmanship is a big part of the event but awareness – the teams are asked questions about the industry – is all part of the overall competition. It’s no longer enough to have good livestock; you need to know how to manage and market them.”

Competitors, who were in teams of three, came from as far afield as Northern Ireland and Canada. One of the highlights was the beef competition, which had 20 teams entered. It was won by the British Blue Cattle Society team, the Blue Bandits.

The team of Millie Hendy, Stephanie Dick and Issy Hartley will now head to Canada to compete at the Royal Winter Fair, Toronto, in November, as part of their prize.

All three members regularly show cattle at regional and national shows with 18-year-old Issy Hartley, of Nelson, Lancashire, being the youngest member of the team. She helps with the family’s 50-head Pendle herd of British Blues.

Joining her was Stephanie Dick, 20, from Stirling, Scotland, who has three Aberdeen Angus, eight Limousins and three British Blues under her own Stephick prefix and regularly helps with the family’s Ronick Limousin herd. Bristol-based Millie can often be found on the halter of winning stock and has shown successfully for the Sterling herd of Simmentals.

The Gloucestershire Old Spots Club (GOSPC) entered a team, the Spotty Trotters, in the pig classes at the new show, which they won.

Its youngest committee member, Sarah Whitley, is just 18 and she was appointed to give younger members a voice.

“About 10% of our membership shows, and we have some super young talent coming through the ranks from all over the country,” says Mandy Garbutt, editor of the GOSPC newsletter.