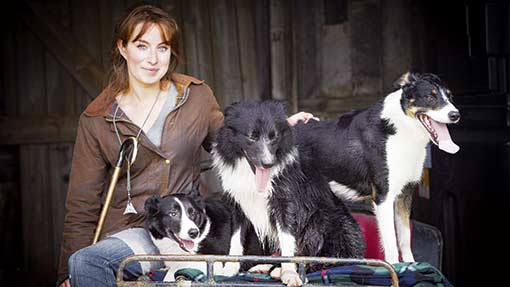 Women taking on jobs traditionally done by men is nothing new, but one shepherdess is certainly making her mark in the farming world, as  Kate Chapman discovers.

Emma Gray wasn’t even born when the Northumberland Sheepdog Trials League started in 1976.

But as well as convincing the National Trust to give her sole tenancy of a 60ha (150 acre) farm when she was just 23, the 27-year-old has become the first woman to win this sheepdog trials competition. She’s secured the title and her own place in its history at her fourth attempt with beloved border collie, Roy.

“The trials cover the whole county and although there are more women starting to take part, there still aren’t that many.

“I don’t believe success comes down to being a man or a woman – it’s about ability.

“If there’s a big audience, I can get a bit nervous, but Roy’s really come into his own this year.

“He’s a powerful dog and was always going to be a good trial dog. The sheep know he’s powerful. He’s calmed down a lot recently and he’s got a good head on him,” she added.

More than 30 dogs contested the league, which spans more than 20 trials during the course of the season. Now Emma, who has also represented England, is hoping to go one better and retain her title.

“I’ve never really had any problems coming into trialling as a woman, although there are people who think when I come into the arena, ‘what are we going to get here?’

“I like that I can come in on a level-playing field and perform well,” she adds.

Emma’s landmark win has also bolstered another side of her business, training sheep, gun and other young dogs, which she started when she was 17 to fund a trip to New Zealand.

She has 14 mainly border collies, including several of Roy’s puppies and occasionally takes on other people’s, too.

“I try not to take too many in, as it can often be soul destroying – they’re either really good and I want to keep them, or it just doesn’t go so well,” she explains.

Training starts at six months old and roughly lasts another six, with a fully trained animal ranging from £1,000-3,000 depending on its  ability.

“I do a bit of basic work with them – teach them their name, to lie down, then I throw them in with the sheep straight away.

“Sometimes they’re brilliant, sometimes it takes a bit longer if they don’t understand. I quite like it if they are a bit forceful – it can be easier to keep them off the sheep, than trying to continuously encourage them,” she adds.

Emma’s own love affair with dogs started at a young age, when she helped out on her parents’ farm in Hawick, in the Scottish borders.

“I’m one of three girls, and I suppose I took on the mantle of being the boy in the family,” she recalls.

“I got stuck in with all the sheep and cattle. I always wanted to go into farming and this gave me a really good basis for my future as you learn everything while you are growing up.

“I don’t believe success comes down to being a man or a woman – it’s about ability.”
Emma Gray

“I came down to Northumberland at 17 and did a year-long shepherding course at Kirkley Hall, where I also got to train a sheepdog.

“That was amazing, and that’s when I got to run my first trial and I was hooked.”

After college, Emma took a job as shepherdess looking after 400 ewes, which eventually led to her overseeing 1,000 livestock.

“It was great. I could work my dogs every day. I just love watching all working dogs – hounds, Labradors and spaniels – it’s what they were born to do and I love working them myself,” she says.

“Then Fallowlees Farm came up and I went for it. I never anticipated I’d get it – I was only 23 at the time. I had to put together a big portfolio on cashflow and a business plan and I was chosen. I’m so grateful to the National Trust for giving me the opportunity to do it.”

After taking over the farm Emma featured in several national newspapers and was subsequently invited to write a book based on her first year in charge. One Girl and Her Dogs: Life, Love and Lambing in the Middle of Nowhere was published in 2012.

In addition to the dog training, she’s also returning to Kirkley Hall this year, this time as a tutor, teaching owners how to handle their sheepdogs.

With no mains electric or phone lines, Fallowlees is extremely remote, while its 60ha (150 acres) are classed as seriously disadvantaged land. Emma relies on a wind-powered generator for power but admits she loves the lifestyle and wouldn’t have it any other way.

“I like the freedom of being my own boss; I don’t have to answer to anybody – although of course the buck stops with me as well,” she says.