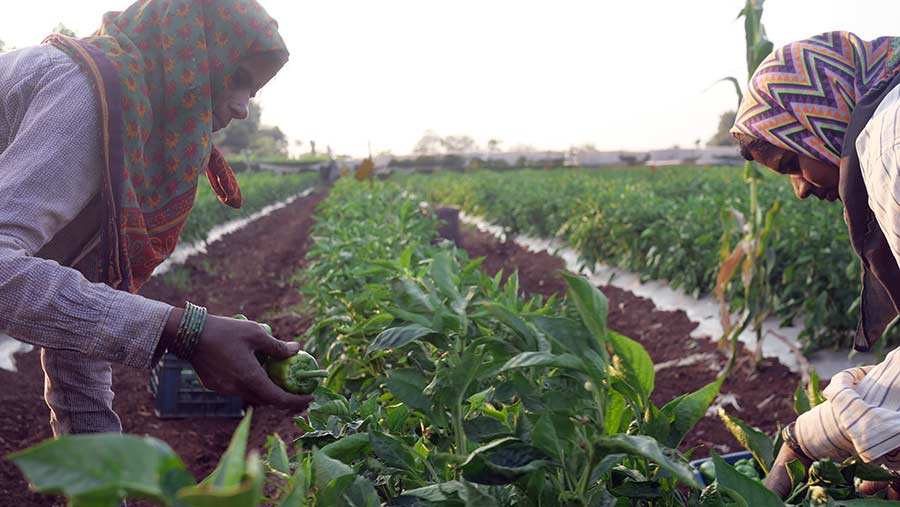 Agricultural progress in India has, for the past 20 years, been measured in terms of productivity increases, whereas farmer incomes and wellbeing have been entirely neglected.

The sector as a whole accounts for only 15% of GDP despite employing more than half of the nation’s population of 1.2bn.

Despite large government investment to achieve greater efficiency, mechanisation in Indian agriculture saw only 2% year-on-year growth between 2001 and 2010.

During that time, millions of rural Indians have relocated to cities to join the ranks of the urban poor, or have left the country in search of higher wages.

Increasing impoverishment in rural India is cascading into problems for its wider society.

Without change, farm leaders and unions say there will be either revolt or collapse.

However, most of Indian agriculture’s problems are a magnification of similar problems present in the UK, meaning there are many lessons British farmers can learn. 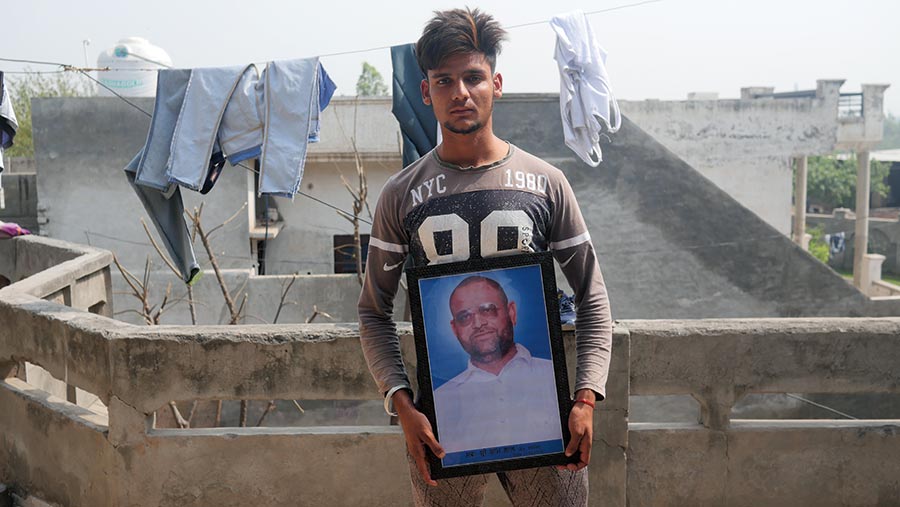 Farming has the highest suicide rate of all professions in India

Suicide occupies a large amount of space in the Indian media but there is little understanding among farmers that the causes of this epidemic are rooted in mental health issues caused by the nature of farming on the subcontinent.

The suicide rate is almost twice the international average with 20.7 people taking their own lives for every 100,000 in the wider population, according to the World Health Organisation.

Farming has the highest rate of suicide among all professions in India, with conservative estimates suggesting that 16,000 farmers a year kill themselves, which is almost 50 a day.

Alongside a lack of understanding of the underlying causes of suicide, there is not an inclusive environment in which men or women can talk about how they are feeling.

Average Indian male farmers work 12 to 14 hours a day, with women working even longer when factoring in extra domestic responsibilities, meaning many have no escape from the isolation of their land.

With mounting debts and no viable escape mechanism, many farmers turn to suicide by drinking chemicals or throwing themselves into rivers.

In India a failed business is viewed as a reflection on the farm owner and the perceived shame is so great that in Punjab, union leaders estimate that one in four suicides escalate to familicides – where a farmer takes the life of their family before taking their own life.

The combination of economic and social factors has pushed Indian agriculture to breaking point, highlighting that an industry continually subject to abuse and extortion cannot remain impervious indefinitely.

Better prices paid to farmers would alleviate the situation, but a better conversation around mental health issues and a shift in perceptions as to what constitutes failure could help many change their patterns of thought. 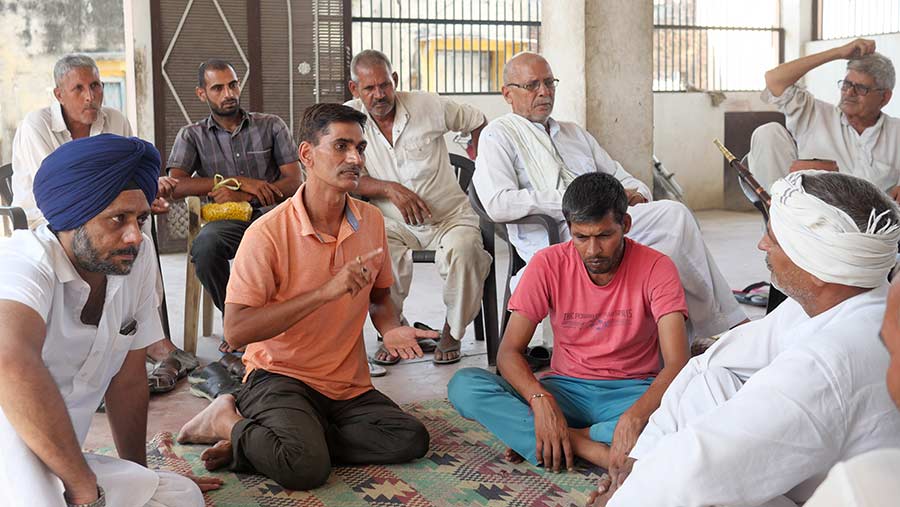 A meeting of a group of local farmers. Organising on a wider scale has proved difficult

Farmers must have a united voice

The subcontinent faces huge internal divisions along language, geographical and religious lines. These factors make it nearly impossible to mobilise farming as one united voice.

There are 22 official languages in India, plus hundreds of tribal dialects. To compound the issue of communication, 70% of the country’s farmers are illiterate.

Lack of core leadership or a national farming union makes smaller pockets of farmers easier to manipulate, and politicians often buy votes with promises of cash bungs or loan waivers.

In 2007, the government paid out £3bn in loan waivers, which still failed to address the root causes of the agrarian crisis.

When Indian farmers are able to mobilise, their protests can be effective at raising the issue but ultimately tend to result in more broken government promises.

But farm leaders are often bribed and direct action often put down with deadly force by government paramilitary forces.

Smart technologies are sidestepping some of these problems, however, and Indian farming is finding its voice.

At the end of November, tens of thousands of farmers held rallies in Delhi calling for higher farm-gate prices, the fourth such protest this year.

With substantial change on the British farming horizon, a united voice will be needed to deal with the likes of Brexit and dairy contract reform.

Farmers often accuse institutions such as Defra and the RPA of inefficiency and poor performance.

In India, however, questionable policies can actively harm those the laws are supposed to protect.

Farms are entirely exempt from income tax. However, this policy has been manipulated by politicians who invest their finances into large modern farms, making it impossible for smaller producers to compete.

Producers are further tied to the land by regulations which prevent the sale of farms that are mortgaged. Farmers often carry debts in the millions of rupees when annual incomes average in just the tens of thousands.

A 2007 National Sample Survey Organisation report of farmers in the Andhra Pradesh region of eastern India found that 82% had debts of 7.14 times the value of their assets.

The current government under Narendra Modi has promised to double farmer incomes by 2022, but at the current rate of growth this will not be achieved until 2043.

Lowering standards would be catastrophic

The UK government, despite being vocal about not lowering food standards after Brexit, is refusing to be tied to any legislation that would prevent that from happening.

In India, with no adequate food standards watchdog and rampant corruption, producers with deep pockets are able to buy any sort of accreditation.

Mislabelled or artificially enhanced products are widespread on supermarket shelves and consumer confidence in domestically produced food is at rock bottom.

Consumers now look to imports to guarantee quality and safety, as domestically produced sustainably grown foods are lost among the mass of mislabelled and even positively harmful products.

About 62% of Indians surveyed in a 2017 AHDB Horizon report said they were concerned about the safety of the products they consumed.

If the UK government sells out farming standards in exchange for cheap imported food, consumer trust will not be easily won back. 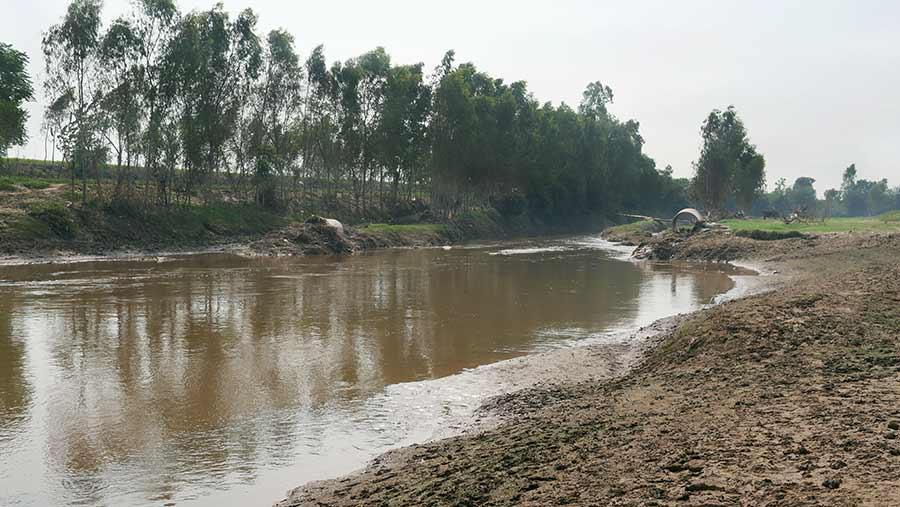 Degradation of land and waterways remains a widespread problem

Sustainability must be at the front of farmers’ minds

India is a long way down the road of a huge ecological crisis, struggling with poor soil quality, falling groundwater levels and increased agricultural chemical use.

This had resulted in yield losses of between 33% and 67%, with 5% of land so badly damaged it can no longer be used for agricultural purposes.

Climate change has greatly contributed to the worsening situation for Indian farmers.

The International Panel on Climate Change (IPCC) has predicted that the global mean temperature will increase by between 0.9C and 3.5C by 2100. 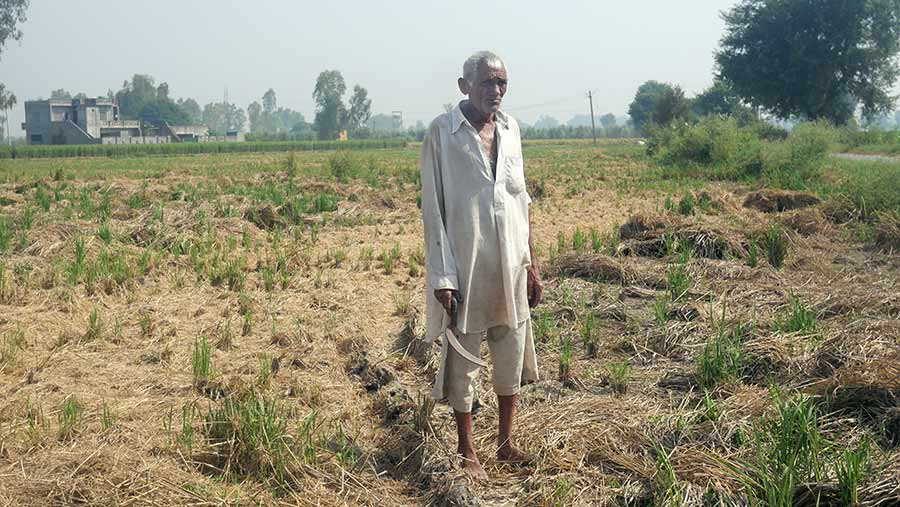 Changes in soil chemistry are starting to affect yields

Rainfall patterns in India are already being affected. About 60% of agriculture on the subcontinent is rain-fed, with close to the same proportion being drought prone and 12% liable to flooding.

Organic carbon levels and soil moisture have already dropped as runoff erosion increases. Crop changes have been witnessed as lower levels of nitrogen and protein and higher amylase, which converts starch into sugar, affect quality.

Every 1C increase in temperature reduces wheat production by 4m-5m tonnes and a loss of total crop production of 10% to 40% is predicted by the end of the century.

Farmers globally are slashing their emissions but the effects of climate change are already very visible in places like India.

Producers must continue to strive towards best practice while also adapting to the inevitable higher temperatures and more volatile weather patterns.