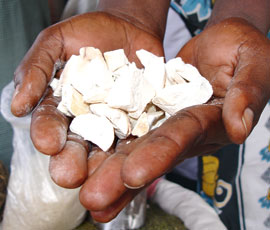 The NFU and charity FARM-Africa teamed up in 2008 to help raise money to support farmers on the continent through to Africa 100 Appeal. Four years later, Farmers Weekly takes a look at the work that’s been achieved.

Debt, economic crisis, food security, rocketing input costs sound familiar? This is the story, not from the UK, but from Western Kenya where people are being helped to farm their way out of a vicious cycle of poverty and hunger, thanks to you.

Back in 2008 the NFU marked its centenary year by partnering the charity FARM-Africa to create the industry-wide Africa 100 Appeal. Now, after raising more than £200,000 for FARM-Africa, the NFU has travelled with the charity to look at the projects that are being supported by the fund in rural villages around the city of Kisumu, an hour’s plane ride away from Nairobi.

The money raised by the Africa 100 Appeal has been used to develop a new project growing a Kenyan staple crop called cassava. This project aims to resurrect this traditional but beleaguered root vegetable after it was attacked by a disease called mosaic virus. And with cooking techniques limited to boiling the vegetable, it had also earned itself a poor reputation as a bland food, especially with children.

Fast-forward to today and hundreds of farmers are starting to plant and harvest new cassava varieties using seed from demonstration plots. Successful roll-out of the project has been enabled by FARM-Africa’s local Kenyan partner Community Rehabilitation and Environmental Protection programme, which identifies and works with champion farmers or community leaders. Each one is tasked with gaining interest from five other farmers in the area and so the Cassava Project grows.

NFU senior press officer Sharon Hockley, who worked on the original appeal said: “While I was expecting to see farmers living hand to mouth, and in very basic conditions, nothing prepares you for how little these people have. Yet the feelings of pride, honour and sheer joy they are experiencing from being able to grow enough food to feed their families and then sell enough left-over crops to raise money to send their children to school, will stay with me forever.

“The Cassava Project is changing lives. It is giving people the confidence that was missing; confidence in their ability to be able to eat this week, feed their whole family and develop their farms.

“I have met some fantastic people and all were thrilled that farmers here in the UK were interested in them, interested in helping them stand on their own two feet and enabling them and their children to have a future.”

Meet Celine. She is a widow with five children. When her husband died three years ago he left her with debts that meant rather than tend her own farm she had to work on other peoples’ land for only 50 Kenyan Shillings or 36p a day. 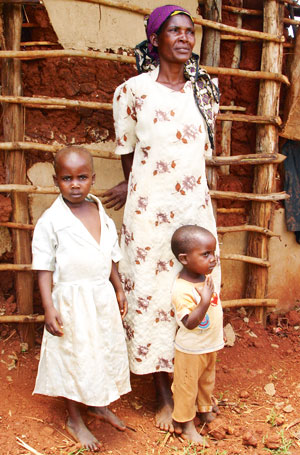 Thanks to the Africa 100 Appeal, Celine has joined the Koyaro Women’s Group, working with C-REP, and has started to grow cassava using seed from FARM-Africa. She now has one acre of land and because cassava is growing in popularity she has a quarter of her land under improved cassava cultivation.

“I chose to establish this new variety after I saw it grown on a demonstration plot,” she explains. “We were also shown how to make the cassava into other food like chapatti, cake and crisps, not just to boil it. I eat cassava at home too where I sun-dry chips and make flour for ugali [a thick, polenta-style cornmeal porridge]. My new variety makes nice food and is a good flavour for sweet samosas.”

Previously, with the old, local variety, the average weight of a mature plant’s tuber weighed between 1.5-2.5Kgs and each plant sold for around 20KSH or 14p. The improved cassava tubers that Celine has grown weigh 6kgs and will fetch a value at market of 60KSH or 43p.

New cassava is benefitting Celine in other ways too. When heavy rain caused the straw roof of her house to collapse she was able to use the money she had saved through growing improved cassava to buy a metal roof to keep her family dry. She also makes enough money to send her children to school.