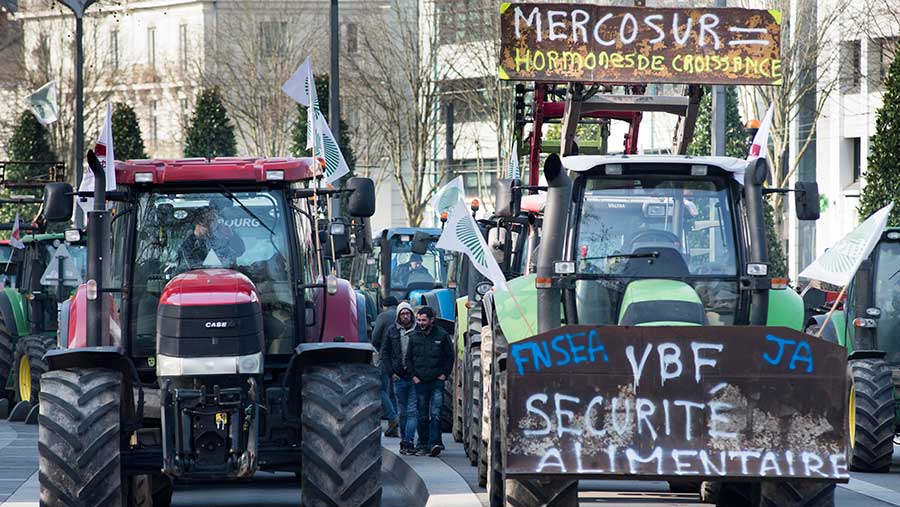 EU trade negotiators are close to agreeing a deal with South American countries that could see thousands of tonnes of cheap beef flood into the market.

The deal is for a reported 99,000t/year of hormone-free beef from Brazil, Argentina, Uruguay and Paraguay, which make up the Southern Common Market (Mercosur) trade bloc.

The proposed tonnage will be imported at a lower tariff rate, or Tariff Rate Quota (TRQ), of about 7.5% for fresh and chilled product, estimates have suggested.

As well as beef, the EU is expected to offer Mercosur TRQs for poultry, sugar, ethanol, eggs, pork and sheepmeat.

In return, EU member states are likely to be able to send dairy products to Mercosur countries at a lower tariff.

What is a Tariff Rate Quota?

They allows a lower import tariff to be applied to a specified quantity of a product, usually as part of a reciprocal deal.

Any product traded above that quantity continues to attract the higher rate.

The largest share of the tonnage is likely to go to Brazil at an estimated 40,000t annually.

The trading bloc already sends a large amount of beef to the EU but at a higher tariff rate.

Reports that the long-proposed deal is in its final stages have caused consternation among key EU beef-producing member states.

“Even though the quota is for hormone-free beef it will not be produced to our much higher quality, welfare and environmental standards,” Ms Morgan said.

“We are calling on the EU Commission to grant beef, sugar and poultrymeat sensitive status to allow us to trade on equal terms.”

Ms Morgan explained that the impact on both the EU and Britain could be even more pronounced after Brexit.

She suggested that without the inclusion of the relatively strong demand for beef from British consumers, Europe would be oversupplied – even without the Mercosur deal.

“Self-sufficiency in beef across the remaining EU member states would rise to 116% if the UK left as planned,” she said.

Industry commentators have suggested that Britain after Brexit will face a much more difficult task in exporting beef to European countries.

If the UK is outside the EU customs union by the time the South American deal comes into effect, additional beef imports from Mercosur members could end up displacing some of the roughly 90,000t of beef the UK exports annually to the EU.

For major beef producers such as Ireland the situation could prove extremely difficult.

The Irish Farmers Association has already staged protests outside the European Commission office in Dublin accusing Brussels of a sell-out.